Swapr:
Main focus was getting Swapr Beta ready. We got the farming UI and contracts ready and started testing it internally. We also did an external farming campaign to close community through swapr.dev. All campaigns were successful.
We decided to postpone the Beta launch until we got another audit, because of all the edits and changes we made, we didnt want to risk it.

I did several interviews with developer canidates to find the right people for our team. I also pushed DXdao to get external help from already known web3 dev companies like Ethworks.
Ethworks provided us with Oleksandr. He joined late May and will be working with us long term. Oleksandr is a front end developer and dev lead at Ethworks.

For those who don’t know me, I’m “Zett”, the User interface and user experience designer and most importantly the Project owner of Swapr. DXdao has two similar roles where the ui/ux person is also the project owner.

I am also part time helping out on marketing and overall DXdao design things.
I got introduced to DXdao through the bonding curve sale and wanting to make DXdao move forward with its products.

Came to keybase early June to complain and instantly loved the way the workers and community worked together. Started doing bounties and helping out. During that time I had my own company which I was planning to sell my shares and move on from. Some of the bounties I helped out with included some work on rails.eth. This is where I met Federico(Swapr Lead dev) for the first time.
Three months later I sent my first worker proposal and was handed over DXswap(before we renamed to Swapr).

29/5 - 29/7
Planning to have a couple of Vacation days during the summer. I don’t have the exact date right now. It will mostly be during July month. Not going to ask for July Payment until i have the dates.
During the end of July I will attend the ETHcc Conference in Paris and represent DXdao. I’m a strong networker and will try get to know new people and new projects that is and could be relevant for us.

The compensation is submitted according to the Worker Compensation Guidelines v2.4 2

Period 2/2 has now ended and here comes the recap.

The long waited for Swapr Beta (farming) updated was released during this time.

A lot of time went to launch a product token for Swapr. SWPR Token and Swapr Guild is in the final stages before getting into a proposal stage. This work will set help any product token from DXdao in the future.

We have prepared the Dapp for an airdrop. An airdrop claim modal will be tested coming days.

During this time we onboarded a new contractor. Together with Melanie we interviewed and onboarded him to work with Swapr Frontend.

We also interviewed and onboarded a new designer named Boris.

Launching a dapp on more than one network is challenging. We released an early version of a network switcher which we improved a lot and will release in the next version of Swapr.

Preparation for a Swapr bridge UI is done. The plan is to integrate the UI with bridge partners.

Overall I would say my main goals this period was focused on and we delivered on each point. 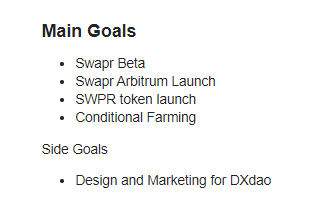 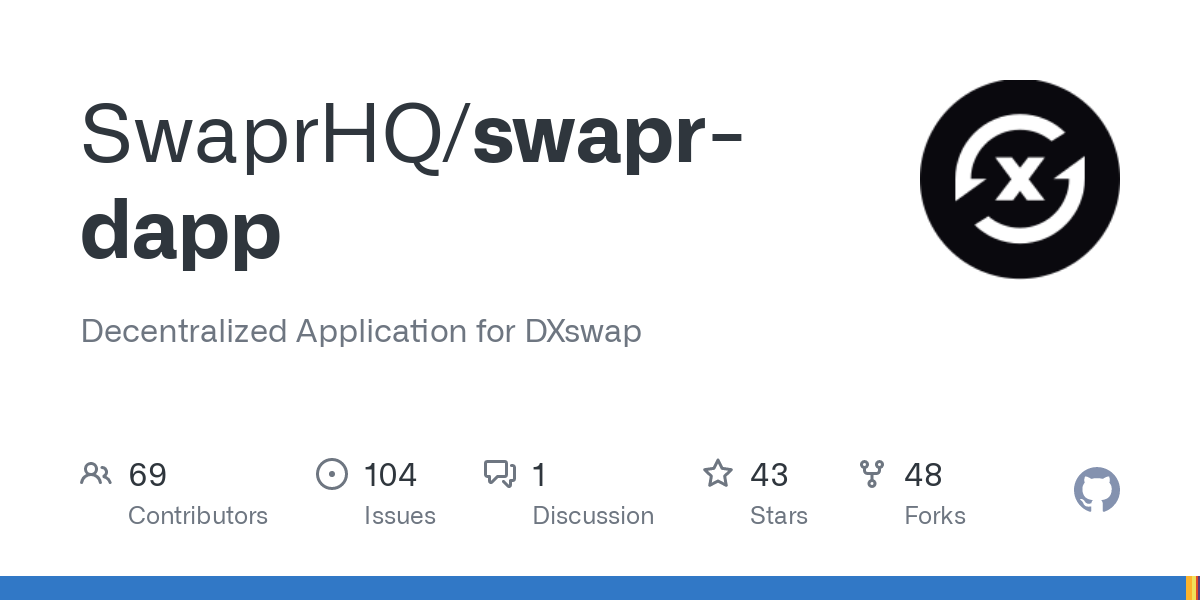 Decentralized Application for DXswap. Contribute to levelkdev/dxswap-dapp development by creating an account on GitHub.

Decentralized Application for DXswap. Contribute to levelkdev/dxswap-dapp development by creating an account on GitHub.