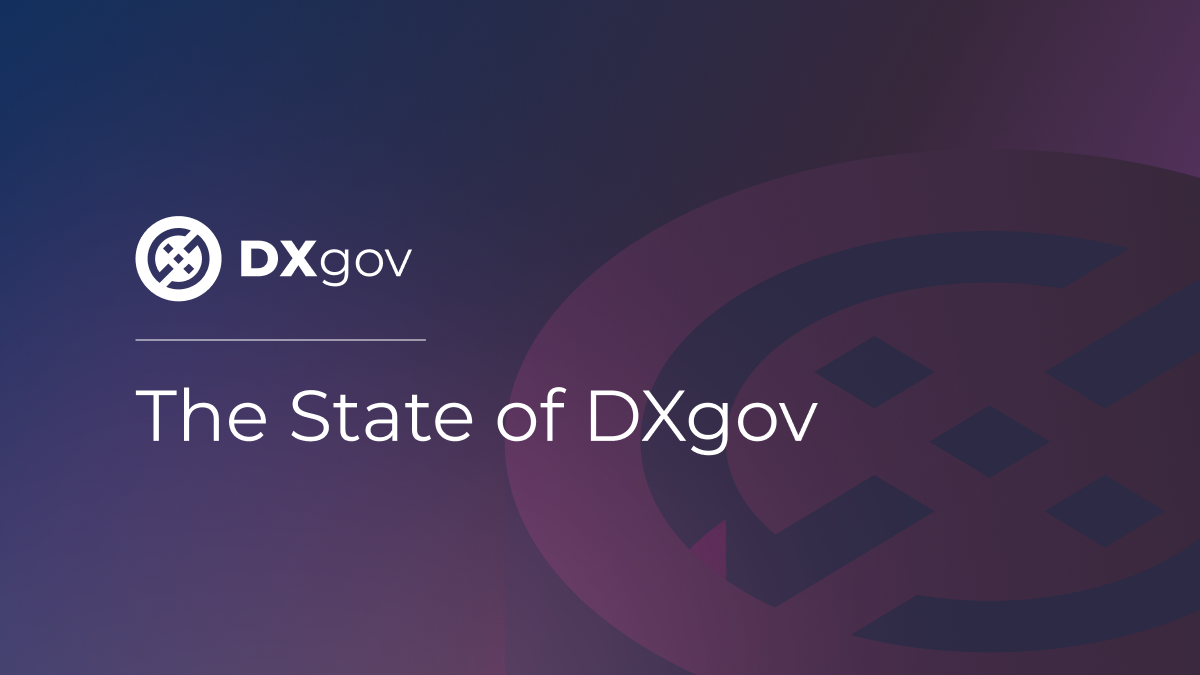 The state of governance across the DAO and Web3 space is in an interesting and perhaps precarious position. There are serious flaws with the current norm and majority of governance systems, as Vitalik recently pointed out in his article “Moving beyond coin voting.” With an increasing number of successful on-chain protocols, there is a growing desire for truly decentralised autonomous organisations.

What we have right now

DXdao has been what could be the most extreme decentralised form of governance in the space for over two years, and we’ve learned a lot in that time.

Everything we have done for the past 2 years has been done via fully on-chain governance. Everything: our entire treasury lives and is managed on-chain, our applications are governed on-chain, and we are paid on-chain. Not many other organisations can claim that without a plethora of asterisks coming afterwards.

This is important because on-chain actions are transparent, uncensorable, and secure.

On-chain voting protects the DAO’s treasury and products from a single point of failure, preventing outside entities from using leverage to force the DAO to take specific actions. In contrast, many DeFi apps aren’t all that different from traditional businesses, such as Uniswap, which was successfully persuaded by the US government to censor tokens on the Uniswap. org front end.

It’s easy to see why liquid token voting is currently the most popular method of governance. It’s the path of least resistance.

When you consider what sparked the crypto industry in the first place, the 2008 financial crisis, the current state of governance begins to make sense. It is evident from this perspective that the concentration has been on capital. So far, crypto has solved numerous societal problems related to this, and it continues to do so today, so the returns have been significant. But what of the returns to labour.

Consider the wealth distribution in our current society. If we were to use that distribution for governance, what would happen? A lot of power in the hands of a few individuals doesn’t sound particularly democratic or decentralised.

Therefore, with the power to revolutionise systems, presented by web3, we shouldn’t be building governance models that are controllable by a few large whales.

Do the people building the space have any control over governance of the protocols?

“Most people get paid partially using project native tokens that influence governance,” you might say. However, the power of governance for labour should not be a choice between holding tokens and governing or selling those tokens for food and rent. The award should be in addition and as an extra bonus, non-transferable.

For the past two years, DXdao has been conducting an experiment to see what would happen if, instead of being so capital-focused, we sought to return some value and power to the labour that brought us here.

Voting power, or reputation, is earned through direct contributions to the DAO, with the majority of power gained by full-time workers earning 0.1667% a month. The key part of this “token” award is that it is completely non-transferrable, removing the possibility of bribery and general corruption that plagues liquid token voting.

It also very effectively puts the power over governance in the hands of those that have some of the most in-depth knowledge about the subject being voted on. While this little experiment has gone better than many meatspace attempts at worker-run governments, it isn’t without flaws; more on that later.

This is another critical component of our governance framework that allows us to remain fully on-chain while avoiding the need for a majority quorum for every decision.

Where decentralisation has the Blockchain Trilemma, governance has the trilemma of decentralisation, participation and efficiency. If somehow in a perfect world you had voting power equally distributed among a community of people, how would you get all those people to critically consider and participate in voting?

The answer here, likely, is that you won’t.

You don’t want to occupy the time of an entire population with a single governance decision, do you? Rather than complete involvement, we seek for efficiency while maintaining decentralisation and a healthy level of participation.

The key to holographic consensus lies in the economic curation of proposals. A small predictions market economy emerges around the likely outcome of a proposal as tokens are staked on it, which increases the potential influence and seriousness of the issue by acting as a gatekeeper for voters.

Additionally, proposals that have been given a financial incentive (boosted) have fewer prerequisites to be considered successful, resulting in increased system efficiency.

The latest trend of delegated voting is another example of how to improve the efficiency of governance systems. While this enhances a DAO’s speed and decision-making, it typically sacrifices centralization and can even exacerbate the corruption issues associated with liquid token voting.

Instead of making the voting power itself be an economic incentive, with holographic consensus, the economics come from governors attention.

Where we go from here

So far, our governance has been quite successful, and we’ve gotten pretty proficient at the operations side of things. But there are several areas that we can improve, so let’s move on to the exciting part: the next steps.

Our old system was based on the DAOstack architecture and framework, which is where many of the core concepts originated, however we’ve reached the boundaries of what we can achieve with it. The straw that broke the camel’s back was the previous UI’s (Alchemy) reliance on a subgraph to index and provide data.

When we rely on our governance system to keep over $100 million in our treasury secure, we can’t just have the UI stop working if the graph went down. As a result, we took advantage of the chance to create not only our own dApp, but also our own evolution of the architecture - which, as you might assume if you’re familiar with DXdao, is more decentralised.

We now deploy, index, and own our own interface and data layer of the new DXvote application, rather than relying on TheGraph’s hosted service or the former dApp’s hosting.

By ownership, we of course mean that the DAO owns the application and data layer of our governance.

Although currently in beta, we’re close to replacing Alchemy and the old DAOstack architecture in favour of our own, which is being built and maintained by DXdao’s growing DXgov team. Not only is decentralisation important, but so is another of our key beliefs: free, open-source software (FOSS). (DXgovernance · GitHub)

I think our ability to see issues and conceptualise new methods to tackle them has been fantastic, given everything we’ve learned and experienced in our two years of governance. This is Governance 2.0, next-generation governance.

So if the experiment has been going well, why change anything?

Although the DXdao experiment of a worker’s paradise has gone well so far, a few issues have been identified.

Several may argue that some aspects of the early allocation of REP (non-transferable voting power/reputation) were not optimal, as some of it was based on capital. Even if we manually selected the initial distribution, it would be far from perfect, and it has taken us almost two years to expand our distribution into what is today an immaculate distribution (at least to us). For most DAOs, this is simply not a viable option.

Although we have plenty of differing opinions as a DAO as is, they are ultimately biased. When only employees can vote, they will naturally vote in favour of workers, which appears to be a good thing on the surface. However, concerns occur over time as some essential viewpoints are overlooked and underrepresented, potentially harming decentralisation. We are very fortunate to not rely whatsoever on VCs for our current treasury, however, that doesn’t mean that there are no other stakeholders other than REP holders.

So what about token holders?

It can be difficult to make DXD token holders happy when they are not directly involved in the governance process. Of course, selling a governance token was never the idea and goes against everything we believe in when it comes to good governance, but the difficult question remains: what good is the DXD token if it doesn’t have any voting power?

So we perhaps went a little too far in one direction.

So how about a happy medium?

What if the answer, as with most things, was not binary, but instead could be both. 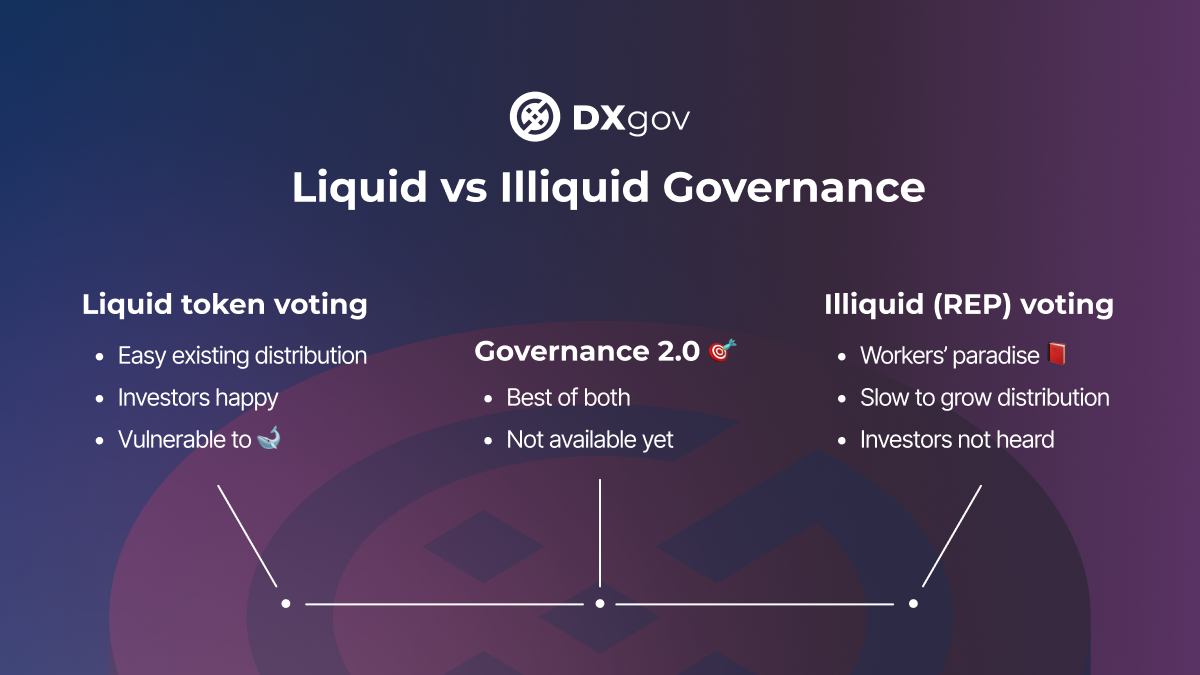 The main aim of governance 2.0 is to unite both the contributors earning non-transferable power along with the investors and economic backing of a project. By creating a voting power formula that combines both REP and staked ERC20 as well as some mechanisms to restrict abuse by whales we gain the best of both worlds.

We believe that this governance model will serve as a bridge, allowing more projects to benefit from reputational governance and holographic consensus. As a larger portion of governance will organically increase over time, the hard start and base distribution become minor issues.

If you would like to read more about the specifics of how we aim to do this please read more here - https://ipfs.io/ipfs/QmYaUmBynYy9wVB4sKRQKJwm9jQNUCXv77uwQ1jpcHdZEf

Before we launch, some of this is subject to change.