The Future of SWPR Emissions SWPR token launched in late August of 2021 following an on-chain signal proposal to DXdao. This proposal “authorized” the correct SWPR token on mainnet – providing an initial snapshot of SWPR token utility, fee model, and most importantly today, an initial liquidity mining plan. These campaigns have helped bootstrap liquidity on Arbitrum One and Gnosis Chain, and also, more notably, have distributed SWPR token and governance power to over 6000 addresses.

You can find the initial discussion thread surrounding SWPR token on DAOtalk.

The “initial liquidity mining campaign” that passed on-chain provided a plan for the first 365 days of SWPR token emissions, indicated under the “Liquidity Incentives” bucket, utilizing a rolling “Epoch” based approach. In the initial configuration, these Epochs resulted in two-week campaigns on all SWPR pairs, which were later extended by combining two Epochs into each campaign.

(As another fun bit of history, SWPR launched with an 80% issuance to the, at the time, newly launched Arbitrum network). 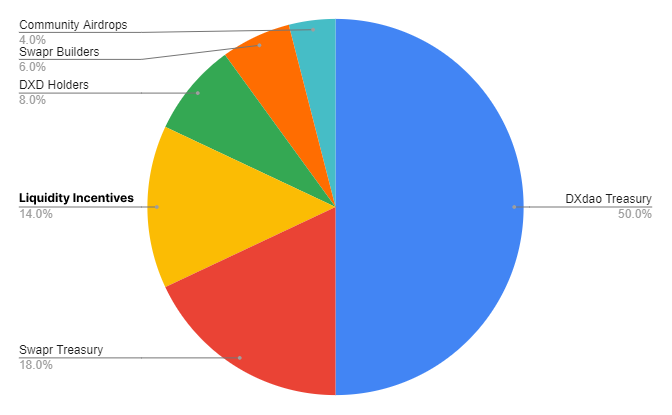 On 2021/09/16 at 15:00 UTC, the very first SWPR emissions started on Arbitrum, followed shortly after by mainnet and Gnosis Chain. After exactly a year, SWPR emissions indicated in this initial proposal are concluding on Arbitrum on 2022/09/29, with Gnosis Chain having one remaining Epoch of rewards to be distributed over the coming month (2022/10/27 conclusion date).

SWPR Governance and next steps

This isn’t the end of SWPR rewards, only to the plan laid out in the SWPR token authorization! Going forward, the community will engage through SWPR governance to signal a running plan for the future of SWPR token emissions, starting with a snapshot proposal and accompanying forum thread on Thursday, the 29th of September, 2022. SWPR token could take a variety of interesting approaches to token distribution from here, including but not limited to smaller focused liquidity emissions, direct model-based distributions (Read: Velodrome), initial approach extension, and even nothing. More information on potential approaches will accompany the snapshot proposal later this week.

As time goes on, the value of the token emissions for liquidity mining diminishes as it releases more and more SWPR onto the market. Going forward, the SWPR squad believes it should wean itself off of direct token emissions and focus on pairs and auxiliary services - like eco-router, eco-bridging and Carrot - where it has a competitive advantage.

More information on potential approaches will accompany the snapshot proposal later this week.

Is it delayed or have I missed it?

Hey, thanks for bringing this to my attention!

Not well communicated, but the discussion period was pushed back slightly due to travel of core contributors. I expect these next steps to be fully propagated throughout socials, the forum and possibly the UI — as this is a large community focused step. Would like to involve as many relevant parties as possible, including the entirety of the Swapr/SWPR community.

Everyone is returning home after an extensive few weeks of travel at Devcon, and the current and final campaigns on Swapr are coming to a close. As mentioned, and not clearly communicated, in the parent of this thread:

This isn’t the end of SWPR rewards, only to the plan laid out in the SWPR token authorization! Going forward, the community will engage through SWPR governance to signal a running plan for the future of SWPR token emissions, starting with a snapshot proposal and accompanying forum thread on Thursday, the 29th of September, 2022. SWPR token could take a variety of interesting approaches to token distribution from here, including but not limited to smaller focused liquidity emissions, direct model-based distributions (Read: Velodrome ), initial approach extension, and even nothing.

Now, with emissions formally ending, the community should focus its attention to the future of the SWPR token and its distribution. According to the following funding proposals, 1, 2, 3, 4, and 5, 7,205,000 SWPR have been moved for use in farming campaigns ontop of the initial 7,000,000

DXdao remains in control of 1,763,777.78 SWPR tokens that have been unallocated from the initial 14,000,000 SWPR allocation to emissions in the first year. This does not account for the return of SWPR indicated in the final allocation that was to be utilized without need for additional transfers. This represents 252,000 SWPR and 196,000 SWPR respectively.

First thing first, I’d like the community to take a second look at the above. My personal accounting did not contain the 1m tokens in the Arb avatar – this may be delegated from another pot that I am not aware of or missing in this pass. Confirmation on the initial allocation on Arbitrum would be fantastic as well.

Since there is a pot of unutilized funds initially allocated to emissions throughout the first year, and considering the current discussions of the Swapr product and long-term token strategy, the SWPR squad believes the best plan of action is as follows:

1). Utilize a portion or all of the unallocated fund to continue campaigns for three months on important strategic pairs on both Arbitrum and Gnosis Chain
2). Curate the entire community towards a direction and action plan for the future of the SWPR token
3). Host bi-weekly - monthly check-in/discussion avenues to collect thoughts and feedback
4). Execute upon community strategy considering the above direction and active DXdao restructuring

For step 1, which would be the immediate action, a proposed bundle of campaigns include:

There is still more to explore around the weights, accounting specifics, and pairs, but figured before reaching a snapshot proposal that some off-chain consensus collection would be great to have.

Should three months of interim SWPR campaigns be deployed ahead of large token discussions?

I am interested about the reasoning to incentive GNO/WETH and COW/WETH. As I see it these are not high trading volume pools. If for some reason GNO and COW should be picked I would prefer to give incentives to the WXDAI pairs of each.

GNO pairs are important as that is the staking token of the chain. GNO/WETH & GNO/WXDAI both have pretty good volume, GNO/WXDAI maybe slightly more. $140k the last week for GNO/WETH vs. $240k the past week for GNO-WXDAI. I don’t think there is one that is more strategic and would not be opposed to incentivizing both (would just split the rewards).

Cow-Weth doesn’t have a lot of volume but it has some and is also the largest on Gnosis Chain. I definitely expect Cow to be around and thriving in a year and want to make sure the liquidity is still on Swapr then. There is a strategic angle too with CoW, given we partner with them for Swapr and also trades from the treasury. I don’t think there are any COW/xdai pools, so not sure if that’s an opportunity or would make it hard to migrate liquidity.

In general, as an LP, I prefer ETH-based pairs for smaller tokens because they tend to be correlated so there’s less impermanent loss.

There is a strategic angle too with CoW, given we partner with them for Swapr and also trades from the treasury.

This seems a good argument to choose it, fully agree.

as an LP, I prefer ETH-based pairs for smaller tokens

As a LP myself I also agree with this.

But actually this is also the best argument for giving less incentives to those eth paired pools. Imo it’s better to give incentives to attract LPs to pools they wouldn’t serve otherwise and reward them for taking this risk, cause the higher risk of IL often comes along with more trading volume which will benefit swapr.

But you are right, there isn’t much COW/WXDAI liquidity right now. Would be interesting to see if this will change if at least a small part of incentives will be allocated to this pool.

I agree with that sentiment on LPs

Hi. Would like to stake Swapr single side. Any chance?

This has been sent to a (new!) SWPR snapshot for a vote. It will be open until next Thursday at 18:00 UTC

I would have loved to have a little more different choices (e.g. split between the chains/pools or even better opportunity to choose between different pools) or will these come up in a second vote?

edit: and wouldn’t it be good to announce the change of snapshot space at Snapshot? Some ppl might have joined some time ago and came along not realizing that voting moved to another space.

Hey, I voted NO for this proposal. Mainly because I would love to see some kind of discussion around what we are trying to achieve with these pairs.

Would have loved to see a proposal with a clear distribution of what pools get what amount of SWPR. I am not against new emissions / utilisation just that we do not have that awesome spreadsheet with details about which pairs get how much.

A little bit of calculations here:
The proposal states 2M spread evenly across 5 pairs. Thats 400K for each pair over 3 months.
Just comparing this to our last weekly emissions,

SWPR-XDAI was 11200 per week, equating to 134K SWPR being emitted. And we are proposing to increase this by 3X.
Other pairs are even worse

If we use similar numbers (or) emissions that are lesser than the ones that we already did in the first year, I think it would make sense. Else, I feel we are emitting way too much SWPR for nothing.

I agree, rewards should be in line (or even a bit lower) with previous incentives. Also, as already said above, I would prefer incentives for pools with larger risk for impermanent loss, means if GNO and CoW are chosen why not allocate it to the xDAI pairs?

And we have to decide about the split between the chains: should it distributed equally or according to the TVL on the chain? Or the liquidity of the specific pools (which might change fast after incentives are installed).

And although it’s more work, we should think about making a decision about the allocation of the incentives on a monthly schedule, this would give us the ability to change if we aren’t satisfied with the outcome.

Reading your calculation imo 100k, split across 5 pools for the first month, could be a good start. And if TVL rose we could increase the number, or we could increase differently between the pools (e.g. increasing more for higher trading volume pools).