It’s been 7 days since SWPR farming launched on Arbitrum One. Those campaigns will run until 15:00 UTC next Thursday. The SWPR signal proposal laid out a plan for a multi-month liquidity mining campaign, where SWPR awards are readjusted every epoch or two week period. According to that emission schedule, there is 896,000 SWPR to be distributed on Arbitrum One for the second epoch. 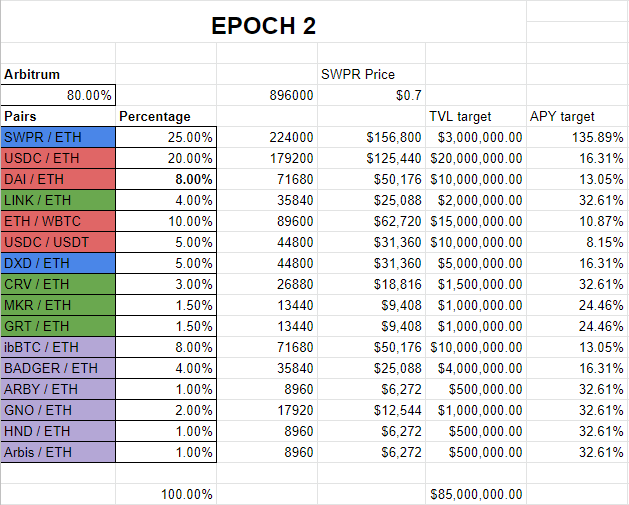 Note: rough estimates, APY & TVL only there to provide context and are not in any way guaranteed or predicted.

The first epoch incentivized 9 pairs. The proposed plan below would keep those pairs, adjust the percentages, as well as introduce 6 new pairs to be incentivized. Adamant finance and their native token ARBY is a newly launched Arbitrum auto-compounder and yield optimiser. They have already integrated Swapr farms and have been in active discussion with the team. HND is a Compound inspired lending and borrowing platform from the folks at https://vfat.tools/; looking to deploy on Arbitrum soon. Arbi’s is a yield aggregator that recently launched on Arbitrum and has already integrated Swapr farms. These changes also add a GNO/ETH pair, as Gnosis has been with DXdao since the beginning.

The big addition to Epoch 2 is 8% of SWPR rewards to the ibBTC/ETH pair and 4% to Badger/ETH pair. Badger has a long history with DXdao. It is a bitcoin-focused DeFi product with almost $600m in TVL across chains and an engaged and passionate community. They joined the Biz Dev call last fall and some former DXdao contributors have also done work for Badger.

Bizdev has been chatting with them as they look to make a big push on Arbitrum. Badger is the project’s native token; ibBTC is an interest-bearing Bitcoin synthetic. Badger plans to build a vault that integrates Swapr farming as well, so hopefully this turns into a longer-term productive partnership.

In the future, MIM or Magic Internet Money is a stablecoin that is making an aggressive push on Arbitrum. It has a similar model to Maker that uses interest-bearing collateral. SPELL is the project’s native token (like MKR). They would be a great project for SWPR rewards but they have a campaign on Sushiswap where they are distributing SPELL rewards at a very high APY, and it’s near impossible to out-compete native token rewards. The Sushi rewards SPELL/MIMs are getting are small though…so if we could convince them to come to Swapr…it would be worth their while… but that would need to be part of a larger partnership.

Note: there are still three pairs from the first epoch whose campaigns have not launched because the tokens are not yet bridged to Arbitrum. DAI is now bridgeable and included in the Epoch 2 DAI/WETH pair. Although currently denoted as 8%, there has been discussions of utilizing a portion of the unallocated 10% from Epoch 1 to increase the release to this pair.

As a reminder, another epoch will start two weeks later, so pairs can be adjusted further. Feedback and suggestions are greatly appreciated before passing through governance. Epoch 2 is set to launch on September 30th at 1500 UTC.

It’s worth noting aside from the main content of the post how conclusions were drawn for adjustments to the pairs in Epoch 1.

On-chain data was extracted and referenced against itself as well as the SWPR emission schedule to arbitrarily determine “effectiveness”. One of these worksheets, seen here, determines specific performance percentages based on a number of factors. TVL percentage vs emission percentage/schedule, volume vs TVL percentage, etc… It also includes a volume weighted average of the scores.

Sheets such as this were utilized when coming to an internal consensus surrounding reductions and additions to the SWPR token emissions.