Hi, This is the budget for Swapr and considers the budget from July to December 2022. This is a draft proposal and is open to feedback, comments and ideas.

I would like to say that, after a lot of new contributors joining, getting onboarded and leaving in Swapr squad in the past year, this is the first time Swapr squad feels a bit settled with most of them completing their trial period and the Swapr squad is happy with each other in terms of the technical knowhow of the team.

We would like to keep the status quo on the contributor spend for these 6 months - H2 2022. Based upon the current setup of the squad, this is how the contributor expenses look like: 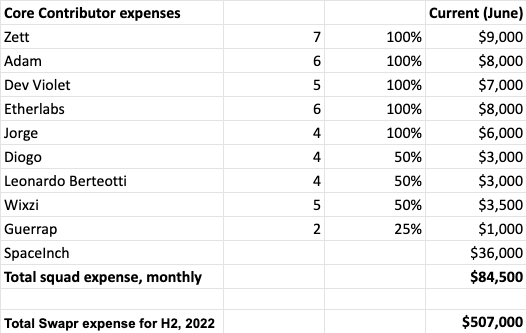 There are possibilities of contributors increasing their time availability, increasing the level and we are guesstimating that budget to be max of 10K for this half year, but would not account in the budget estimation and numbers as this would still need to be proposed and voted upon.

Audits:
There are some contract changes that we are doing to upgrade FeeReceiver contracts, core contracts and the farming contracts.We are also exploring options to deploy to a couple of new networks. We will need to be performing audits for all of these changes this H2.
Estimated audit expenses - 25 K USD

Team expansion:
Swapr would like to actively start looking for a fulltime positions for the below. Incase, we end up finding contributors, their budget is given next to it as well.

Bizdev / Marketing and Comms - Level 4 or above - 35K
We would like this person to drive biz dev initiatives for Swapr. Some of the responsibilities would be to establish goals and milestones for Swapr emissions, partnerships, increasing users and activity for Swapr. We would like this role to be full time with Swapr so as to not dilute the efforts from other DXdao initiatives.

Senior Solidity Engineer - Level 5 or above - 40K max
We have a lot of scope towards deploying new contracts on new networks, new changes to be done around swap aggregation, project fee split, existing contract upgrades and so on.

There are some very small infrastructure and tools budget that could be added as well like Github, Netlify and other infra and tools needs. We should probably add them under general development / tools rather than Swapr specific budget.

Some extra info:
We looked at various different possibilities of reducing the squad size, moving devs to different teams and also releasing devs for a prolonged bear market. The benefits of reduction right now does not justify the scope and ambitions of Swapr this 6 months and beyond.
QA budget should be defined seperately and not included in the Swapr budget. This includes the exclusion of 1 QA from SpaceInch from the budget.