I am propose to create dxDAO incentive and give Mesa custom market makers (CMM) set up owners lifetime possibility to ask 1000 dxDAO REP points per each CMM created according to this dashboard
https://explore.duneanalytics.com/dashboard/gp-passive-liquidity-provision-with-cmm-yield-farming-dashboard?p_w4270_deployment_id=108&fullscreen

DeFi create a lot of opportunities for LP and farming. Gnosis created incentive from Gnosis side and I think dxDAO should create incentive from dxDAO side. CMM is a powerful tool to make Gnosis protocol and Mesa widely using. dxDAO should take part to popularize CMM.

Alchemy - A decentralized application for budgeting, collaboration, and DAO management, powered by DAOstack.

@ykplayer8 why rushing into submitting a proposal without discussing it first here in the forum? I think it would be better to submit a signal proposal that affects the entire organization (we are talking about issuing 20k REP) once it is reviewed and well known by the community.

And yes, I agree with you that there should be an incentive program for market makers but I dont think that the incentive should be in ETH. Do they care about our governance? Are they going to vote and be active in the community? I dont think so.

What about having the incentive program with DXD?, we have plenty of it and I think it will be far more attractive to CMM than REP, in that case it will have my positive vote.

As a participant of CMM program on Mesa, I would be glad to participate in dxDAO governance. Incentives are important.

Thanks @AugustoL for your important feedback.

Thanks for joining to this discussion. Nice to see you here. Let me introduce you to dxDAO community. @vvk is active member of Unofficial dxDAO russian and ukrainian telegram group. He started trading on Mesa during UAX program. In the end of June he set up UAX-DAI CMM and put his capital to GP (Mesa) contract on regular basis. He active taking part in every day discussion about dxDAO life and Mesa trading in telegram.

Hi @ykplayer8, thanks for proposing this. I think it’s an important initiative. DXdao needs to grow in membership and become more diversified and Mesa liquidity providers are an important part of the community. Ultimately, I would like to see an initiative like this pass, but would like to see this thoroughly discussed by the DXdao community first. I have some questions.

I am not rushing my proposal.

Actually I think you are if you create the proposal in Alchemy at the same time you start the discussion here in the forum. Proposals like these ones where the collective agree on a big issuance of REP should be discussed in the forum first and once you get enough people in the community backing it publicly that would be the time for creating the proposal, thats my opinion.

Because the idea is good but Im hesitant in voting for it being it presented like that, @JohnKelleher asked very good questions that should be answered before voting, also we are working on the technical level to distribute REP to smaller groups rather than directly to individuals, creating sub organizations for specific decisions it is healthier in the governance level, avoiding a unique individual hold too much rep in multiple accounts and making sybil REP attacks much harder.

Looking forward to see this discussed in next week calls

I am linked my proposal to CMM program dashboard (first round). There are 20 CMM deployments from 8 owners. The first round end today. To be qualified to this dashboard the minimum capital per deployment is 10000 USD (5000 USD stable coin and 5000 USD ERC20 volatile token). I will be more than happy if we see situation when people starting CMM deployment with minimum 10000 USD capital paying more than 100-150 USD for gas for full circle to earn 1000 dxDAO REP. If dxDAO will see bad activity we can block new REP minting during claim REP proposal. At current moment dxDAO not agreed new REP rules and from the history perspective new 25% of REP were minted during this year for devs and gitcoin donors. I dont remember any cases for new mint REP for other groups. dxDAO need REP politics and I am 100% for this. To keep things easy I think it is better to sync dxDAO and Gnosis program rules. I dont see any issues with program rules developed by Gnosis. Also I want mention - my proposal is just for first round of CMM program and we have a lot of time develop and agreed other rules for future rounds. 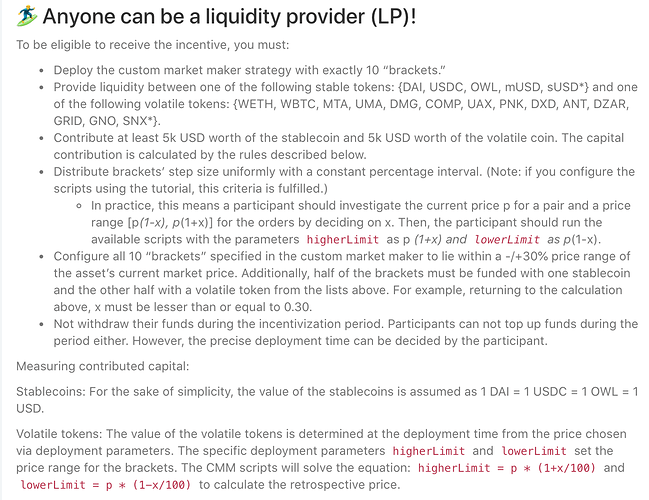 One more time - I am not rushing a proposal. I remember times when any new dxDAO proposal was like holiday day. I am support discussion and transparency and I am against censorship and people who think that they are dxDAO bosses. I have made proposal and start topic in same time and dont see any issues with this. Holographic consensus works perfect and if my proposal is bad - my proposal is not passed. I hope if someone downstake my proposal or vote against he will offer better alternative.

Also I want mention - my proposal is just for first round of CMM program and we have a lot of time develop and agreed other rules for future rounds.

Ah, so it seems then this proposal is only for the 20 existing deployments that were made during the first round of the Gnosis incentive program, right? The proposal as written in Alchemy is unclear to me as to whether it applies to any future CMM deployments that meet the same criteria.

I would be happy to welcome new members to DXdao such as @vvk who have participated in Mesa and to give them some REP.

At current moment dxDAO not agreed new REP rules and from the history perspective new 25% of REP were minted during this year for devs and gitcoin donors. I dont remember any cases for new mint REP for other groups. dxDAO need REP politics and I am 100% for this.

This is true, but still far more REP was given to DutchX liquidity providers and token stakers from the initial staking period (900K, which even today represents 72% of REP). As we saw in the initial staking period, the DutchX volume did not last. So I think this is a lesson for DXdao that it should be careful with incentive programs. Again, I am 100% for balancing out REP distribution to different groups. Augusto and I and other devs are working to allow DXdao to include DXD holders in voting as well. Now that Mesa and Omen have launched, and soon DXswap, I think liquidity incentives are an important measure for DXdao to take. Hopefully we will soon have plans for Mesa, Omen, and DXswap and will achieve a more balanced REP distribution going forward.

Ah, so it seems then this proposal is only for the 20 existing deployments that were made during the first round of the Gnosis incentive program, right? The proposal as written in Alchemy is unclear to me as to whether it applies to any future CMM deployments that meet the same criteria.

Yes, right. Sorry from my side to be unclear.

Again, I am 100% for balancing out REP distribution to different groups.

This is my opinion to.

Someone downstake my proposal and I want to upgrade it with important addition. No more new 2000 REP for one owner address. The fist CMM round is finished and the numbers are clear now. 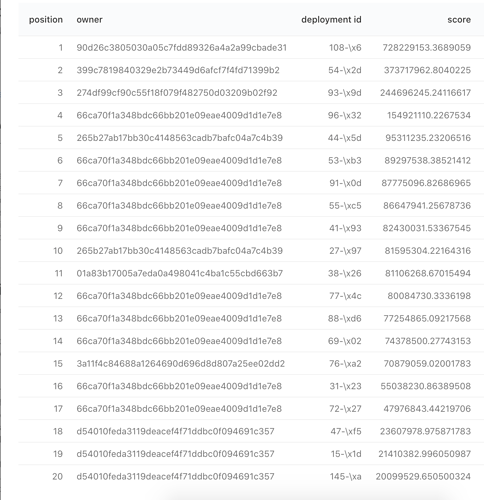 P.S. I am control one of address.

Hey @ykplayer8
As discussed on Keybase, I’m not sure about the effectiveness of distributing REP to LPs for two reasons:

Having said that, I think the DXdao should have many small scale experiments as nobody really knows how it will play out and the goal is to broaden the community.
So all in all I’m in favor of this as a one time experiment.
Looking forward to see how it plays out

Update after keybase discussion. Some of owners of CMM already hold more than 4% of dxDAO REP and as a respect for the currently set max limit of 4% REP per address (owner) they can`t request any more REP. Using workers guideline logic those owners may be compensated with DXD.