Hi all, I have written an early draft describing a solution for achieving highly-scalable collaboration by building a network of DAOs. I’d love some comments & feedback!

DAOmesh: Large-scale collaboration through a network of small DAOs connected by bounties

DAOmesh: Large-scale collaboration through a network of small DAOs connected by bounties Or: World Wide Web for a collaborative economy 1. Intro Decentralized Autonomous Organizations (DAOs) are organizations where members collaborate through a smart...

TL;DR: Each DAO in the DAOmesh network has a limited number of members (maybe a dozen) , which circumvents all the problems that arise from scaling individual DAOs. The DAOs are connected together economically using a bounties platform: they can both place bounties and work on bounties placed by other DAOs. A liquid hierarchy forms between the DAOs, allowing for highly complex & abstract bounties to be placed, and the number of people working on each bounty automatically scales based on the complexity of the task.

Love this (disclaimer only skimmed document), and would like to add my thoughts as well. Please let me know how this aligns with yours:

This has a lot of potential in my opinion. How community structure affects the resilience of a network can be framed by this article and others that I have been exploring, The research showing how networks are self-organizing creatures and the mesh seems to be able to create nodes of complexity without too much overarching hierarchy. By applying percolation theory it would appear that the small mesh nodes with purpose could weave and cris-cross the whole ecosystem in an efficient and without creating power structures that become “petrified” and resistant to agility and resilience. 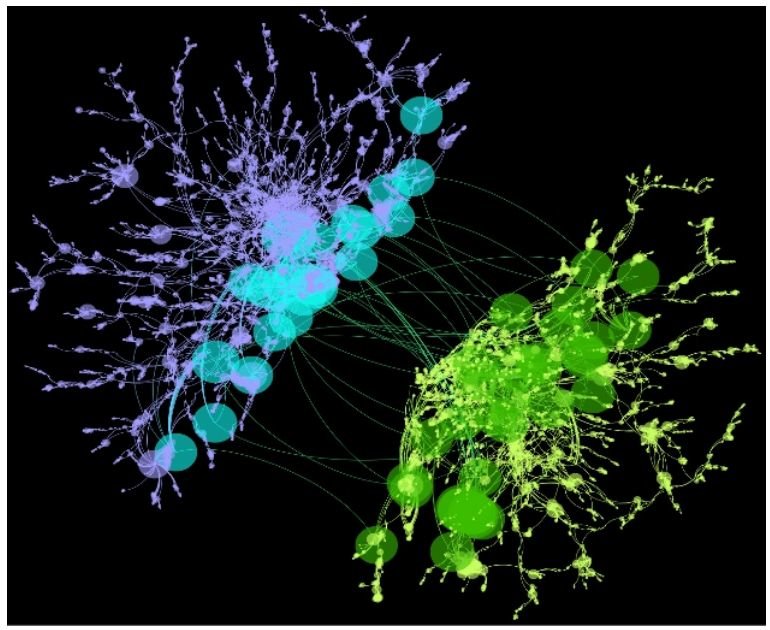 How community structure affects the resilience of a network

Network theory is a method for analyzing the connections between nodes in a system. One of the most compelling aspects of network theory is that discoveries related to one field, such as cellular biology, can be abstracted to a form that applies...

System resilience is a way of describing the robustness of a network. To explore the effects of community structure on resilience, the researchers applied a theory called percolation. Basically, percolation theory seeks the probability of an open path across a network. Percolation is strongly influenced by the number of interlinked nodes within a network.

It is not possible for all nodes in a network to become interlinks. As an example, the authors cite international airports: “Only some airports have the longer runways, customs administration, and passport control required for international flights, and when an airport node already has interconnections, the costs of adding additional interconnections is significantly lower.” By contrast, a smaller airport without these infrastructural advantages would not be able to connect to airports in other countries. This is analogous to people who possess the social facility to interlink different network neighborhoods, or brain cells that have the morphological capacity to interlink brain structures.

The researchers found that the interlinks between different communities deeply affect the percolation phase transition—they liken the fraction of nodes with interconnections to an external field in a physical phase transition. They report that systems become more stable and resilient as the fraction of nodes with interconnections increases. In terms of social networks, the greater the number of popular, cross-community people within a network, the more resilient the network will be to external forces like political upheaval or natural disasters.

The authors emphasize that their results apply to other types of networks. They write, “Although our theory is applied here to study the resilience of modules within a single network, it can be extended to study resilience of interdependent networks and multiplex networks.”

In the DAOmesh model I’m proposing a network where all DAOs are small, so there won’t be large DAOs with hundreds/thousands of people. Different DAOs work on different levels of abstraction, which is why I used “high-level” and “low-level” DAOs in the doc. So “large DAO” and “large scale DAO” you used in your comment might be misleading. (and I kinda got the feeling that you misunderstood the model) “Macro DAOs” and “Micro DAOs” are less misleading IMO, but I’m not sure.

Technicalities aside, you’re right that high-level DAOs will work on the coordination & compilation of work while low-level DAOs will focus on actually building stuff. IMO both types of DAOs will be tightly knit teams. Also, the distinction between them will be quite fluid & subjective: for instance, for a less technically inclined team building a website may be a complex task that needs to be divided up, while for experienced engineers it might be a really low-level task. What level a DAO is on will mostly be decided by the amount of capital it has, meaning a low-level DAO could jump up many levels instantly if it got a cash injection, so the moving up & down might be a pretty fast process.

I agree there could be more protocol for bounties, but that could & should be handled by the bounty platform (eg Bounties Network). As tasks grow complex some protocol would be necessary, but I think informal protocols & traditions may suffice, so there’s no need to include it at the base level.

DAOStack DAOs could be adapted into the DAOmesh as one of the node implementations, but

In the event that DAOStack fulfills its promise, it’s plausible that DAOmesh will have both large and small DAOs, and they will be economically connected through bounties in the same way as I described. In this sense DAOStack (and other Mega-DAO solutions) complement DAOmesh: Mega-DAOs focus on internal mechanisms of DAOs, while DAOmesh focuses on connecting DAOs.

Very interesting article! I didn’t know there was so much research into the structure of general networks. It’s exciting to have theoretical support for the plausibility of a network with little to no rigid hierarchy.

Yes. The information is out there but within different disciplines or silos. It might be fun to collaborate as a study group. No need to reinvent the wheel. Rather ironic that we are lacking awareness of the science of node percolation and the self-organizing science of their integration. I think the DAOmesh could be worth exploring and framing within the possibilities of the known research already available as well as brainstorming how it would be a logical fit for certain types of initiatives.