One of the issues we are tackling now is high gas is hurting usage. 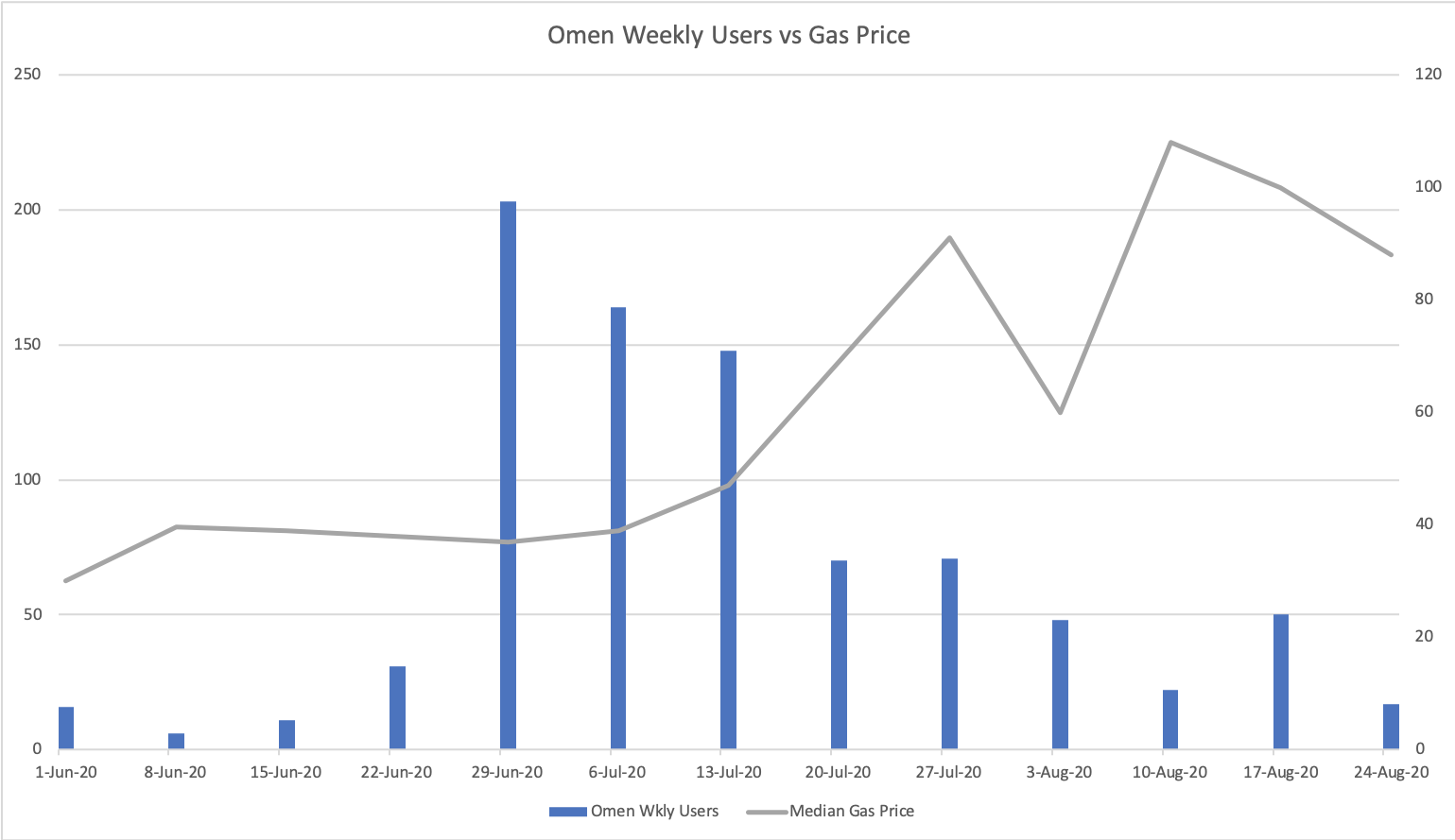 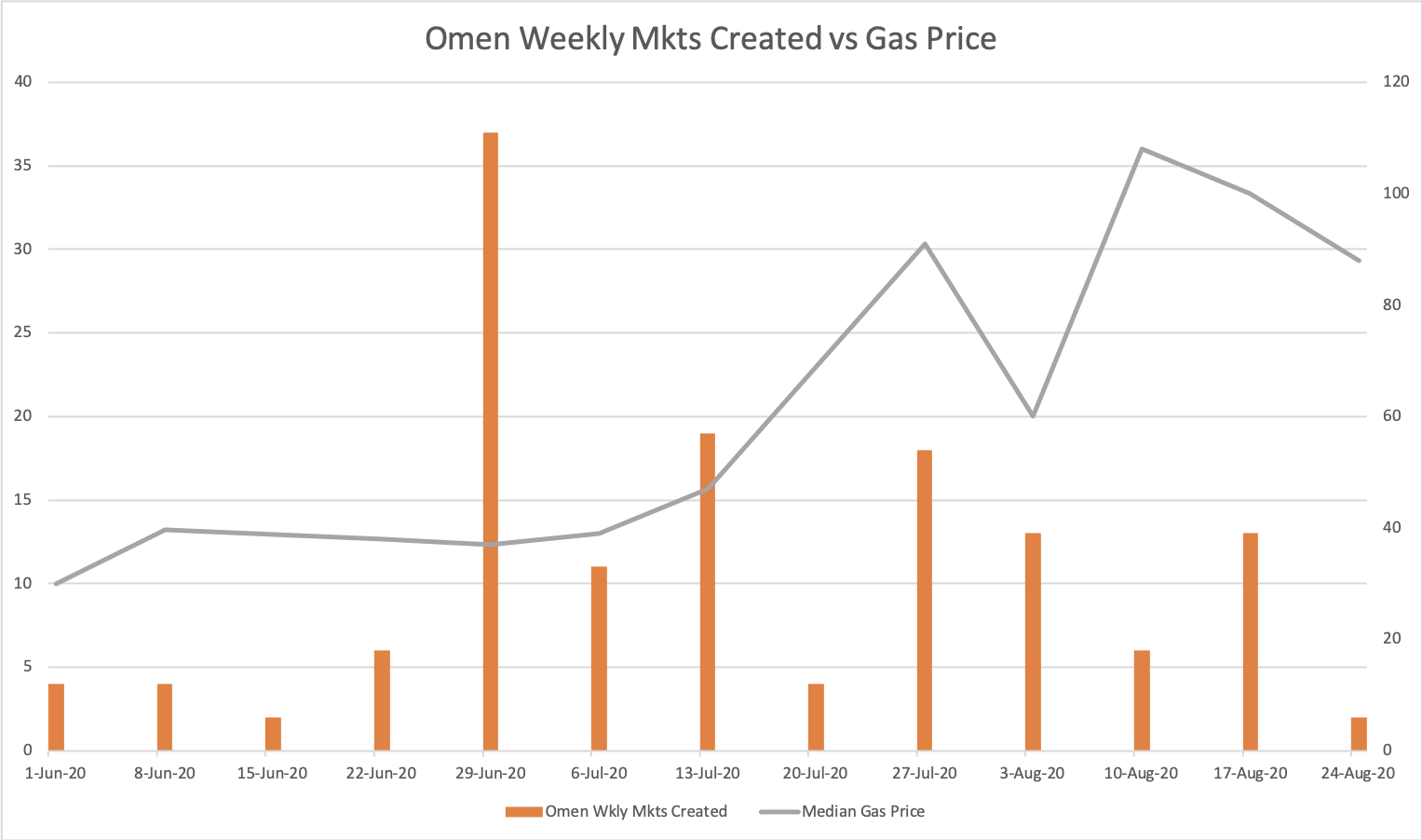 So if we had a good, easy way to pay for users gas, the DAO would likely be happy to for a period of time

We don’t know how much of a hurdle it is, but it is a hurdle.

Today, we can start an experiment where DXdao pays for users gas on Omen if they use an Authereum wallet (and connect to Omen with Wallet Connect).

Zero dev implementation. We just need to fund a pot of gas reserve then they turn it on.

Let’s set an intial budget for how many users we want. At Omen’s early peak, it was 200 users. That should be our first goal.

Couple estimates/ideas:
davidoj: Gas prices currently around 0.3 Eth/day with ~50 weekly users, might be 1.5 Eth/day with 200 weekly users: https://explore.duneanalytics.com/queries/8612/source#17284
2 Eth/week, might be 10 Eth/week with 200 users
Each user might also trade more if you’re compensating gas costs

geronimo: - lets send 10 ETH to authereum and announce that anyone who is using an authereum smart wallet will have their transactions paid by the DXdao (first limited by 10 ETH, if we see more demand and everything is legit we are gonna increase it)

Marketing benefit
This will give us an opportunity for marketing. We can spread the word: Gasless usage of Omen.

Protections:
At the same time, we don’t want some bot to just waste it by draining the pot for zero reason, so we would want to have some additional protections in place.

Authereum team says they can implement additional rate limiting protection based on ETH spent on fees per user or offer the ability for DXdao to countersign transactions to mark as sponsorable.

They themselves offered sponsored transactions on Authereum for ~6 months and dealt with spammers. They spent a lot of time adding protections and firewalls to transactions that tried to spam them (mint gas tokens, airdrop tokens, etc.) and pretty successfully stopped them. The DAOs txs would also be checked by those same filters that they now use on Authereum, as well as the rate limits and other items mentioned.

The user scans the QR code using the scanner on the wallet connect page on Authereum wallet to establish the connection.

Add the “Connect With Authereum” as a third option

We may also use existing libraries like onboard.js or web3modal that offer Authereum as a login option.
But since we already have a custom modal with login options then adding Authereum as a 3rd option seems like the way to go. Integrating the Authereum web3 provider is relatively simple https://docs.authereum.com/web3-provider

Due to unexpected technical events, we never got to start this experiment.

We have spent the past month trialing, testing, refining and improving the Authereum - Omen integration, which allows DXdao to sponsor users’ Omen transactions.

We now have Wallet Connect with Authereum for Omen and we also have “Log in With Authereum” built right in. It’s a great user experience.

We have had some pickup in users during this experiment without widely sharing it (only sharing internally).

We have sponsored 3.8 ETH in fees so far (out of the 10 ETH). A large part of it was spent by internal people testing and trying to fix Omen and Authereum. You can think of it as 1.5-2.5 ETH fixing Omen.

It is all working well now.

We are preparing to go wide with the announcement this week, and we want to be prepared for a decent pick up in activity. We want to top up the gas tank with another 10 ETH to be ready for this.

I incorrectly made some assumptions that more people have been following what has been going on with Omen so apologies for that, and I’ll try to clarify.

To provide some additional detailed context:

Some thought that incentivizing LPs was the answer, and we got to see that in action with the Kleros PNK program but it didn’t seem to be doing much.

In order to combat this, the goal was to see how Omen usage is affected if DXdao could come up with a way to eliminate gas costs. The cool thing is that this idea isn’t gameable in any way. It’s just removing a user pain point.

There are tons of benefits to attacking this issue via a partnership with Authereum. We set off on tackling this. The tricky part was that even though this is a simple, easy to use user experience, this is a complex process behind the scenes (with proxy smart contract wallets interacting with each other).

We had issues with the CPK returning the wrong gas limit and issues connecting to Authereum, then fixing the CPK issues led to some other front-end problems, then there were issues with transactions because Authereum’s relayer had a default gas limit of 1 million which certain transactions exceeded. With help from the Authereum team, Gnosis team and everyone else, we were able to solve all of these issues.

We shared the entire process with “internal” groups like DXdao community, Omen community, and a couple others. Community members helped test, identify and sort through all these issues. It has taken 1+ month and 1-3 ETH spent testing and doing all of this. Some ETH was also used to allow community users to use Omen.

Also, by sharing this feature lightly, we have had a pick up in Omen activity even though gas prices remained high. We’ve gone from 9 users to 20-30 per week (even though we haven’t truly shared the feature yet!)

Now, we are in a position to do the original experiment: Omen vs Gas: Experiment #1 - Authereum solution, but now it’s #1.1!

After all of this work to get to where we are, to have made Omen better, to have created a great technical partnership, we now have ~6 ETH left in the gas tank. You can think of the 4 ETH spent, as it cost us $1400 to make Omen more Awesome!

We now have a plan to announce this new feature to the world (planning with DXdao marketing, Gnosis and Authereum), and if we get the many more users we want (the whole point of the experiment from the start), and we run out of the 6 ETH in say 1 week, that is set-up to look pathetic.

Also, we are competing with entities in the pace like Augur and Polymarket - we want to be well positioned relative to them, and lead with our strengths.

So now we can do a few things:

If you have any thoughts about this plan, please share here!

It is clear that subsidizing gas costs is not sustainable unless it makes up for itself in profitability somehow. While it is not very clear from the posts above, I think there are two potential goals here:

As pertains to these goals, I have some questions.

We can just use what we have left and see how it goes.

Here are some of the stats we want to look at post experiment:

What else do people think it would be good to learn?