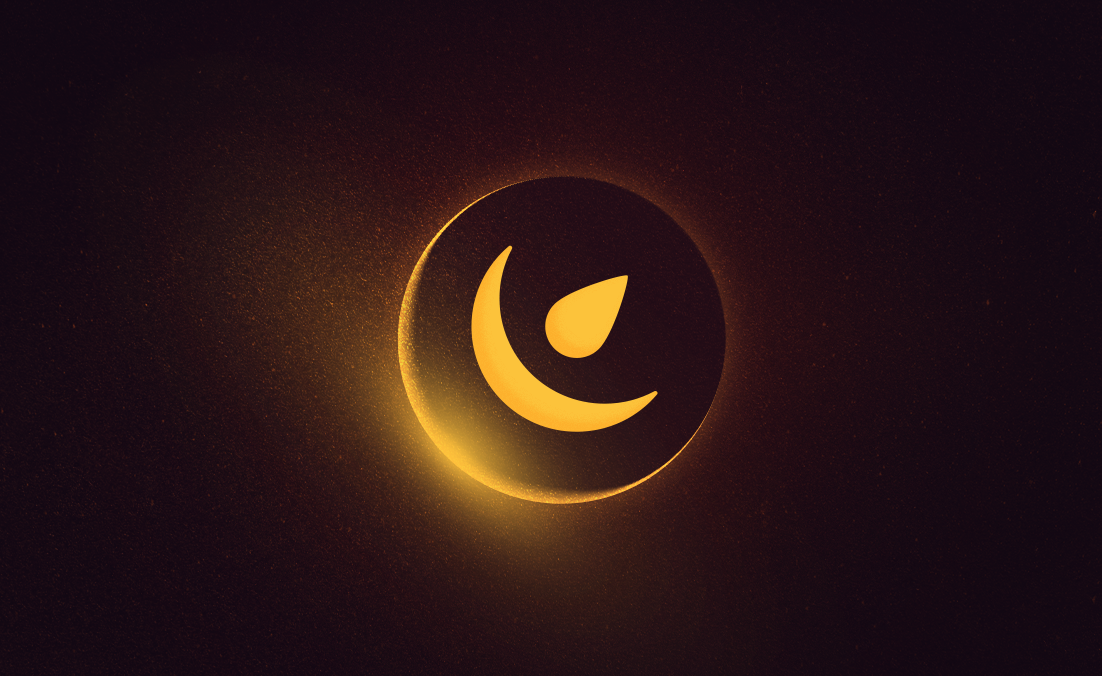 Since introducing Omen Guild and OMN Token in January, the DXdao team has been building Omen Guild’s governance structure, token distribution plan, and liquidity incentives program. The goal being to create decentralized, community-driven governance for Omen.

We’re excited to share what we’ve come up so far and hope to spark discussion to improve Omen Guild and OMN.

This post was prepared by me, @corkus, and @pulpmachina in coordination with the OMN Token working group and DXdao contributors.

OMN token incentivizes efficient governance by enabling and rewarding Omen Guild members (“OMN Members”) to maintain and improve Omen. With OMN token, OMN Members can use their voting power to:

As the Omen Guild develops over time, OMN Members will be able to act as governors to curate markets for Omen and be rewarded for their efforts. The Omen Guild will also eventually manage a treasury.

The Omen Guild uses the OMN ERC20 token for governance. In order to participate in governance, OMN Members lock their tokens for a minimum of 2 months and maximum of 2 years in the Omen Guild governance contract. Voting weight is based on the number of tokens locked in the contract.

Currently, DXdao verifies which markets are valid with Kleros curate, based on the Omen Market Rules. In contested markets with high liquidity and trading, such as the 2020 Presidential Election Market, the question of market validity has been challenged in Kleros court. Though the outcome of Case 532 for the 2020 Election resolved favorably for Omen, the arbitration process was long and drawn out. The uncertainty of the outcome undermined the confidence that users had in trading and providing liquidity on Omen for that market.

Now with OMN Market Verification, OMN members can quickly flag and invalidate markets and earn OMN for their service. Markets the Omen Guild verifies to be valid are, thus, perceived with much higher confidence by traders and liquidity providers.

Here’s how Omen Market Verification works: When a user creates a market on Omen, a 2-day flag period begins, during which any OMN Member can flag an invalid market. A flagged market calls the Omen Guild to vote on market validity for a 1-week vote period. 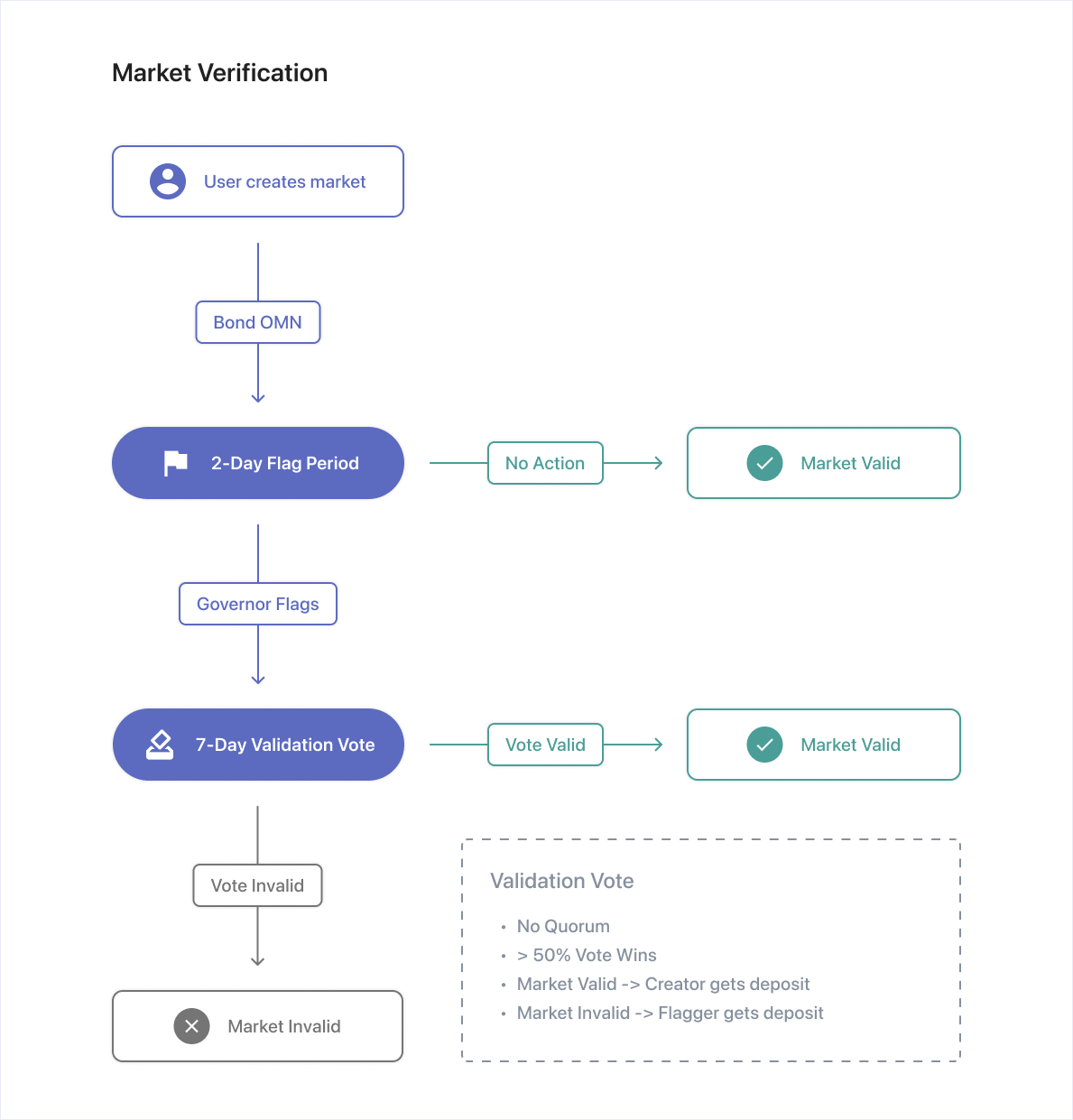 Passing the question of market validity to the Omen Guild brings a new form of collective wisdom to Omen through decentralized governance, giving confidence to Omen traders and LPs that objectively valid markets are tradeable.

At launch, in order to promote liquidity on the most interesting and contentious markets, OMN Members can vote for markets that will receive liquidity rewards. 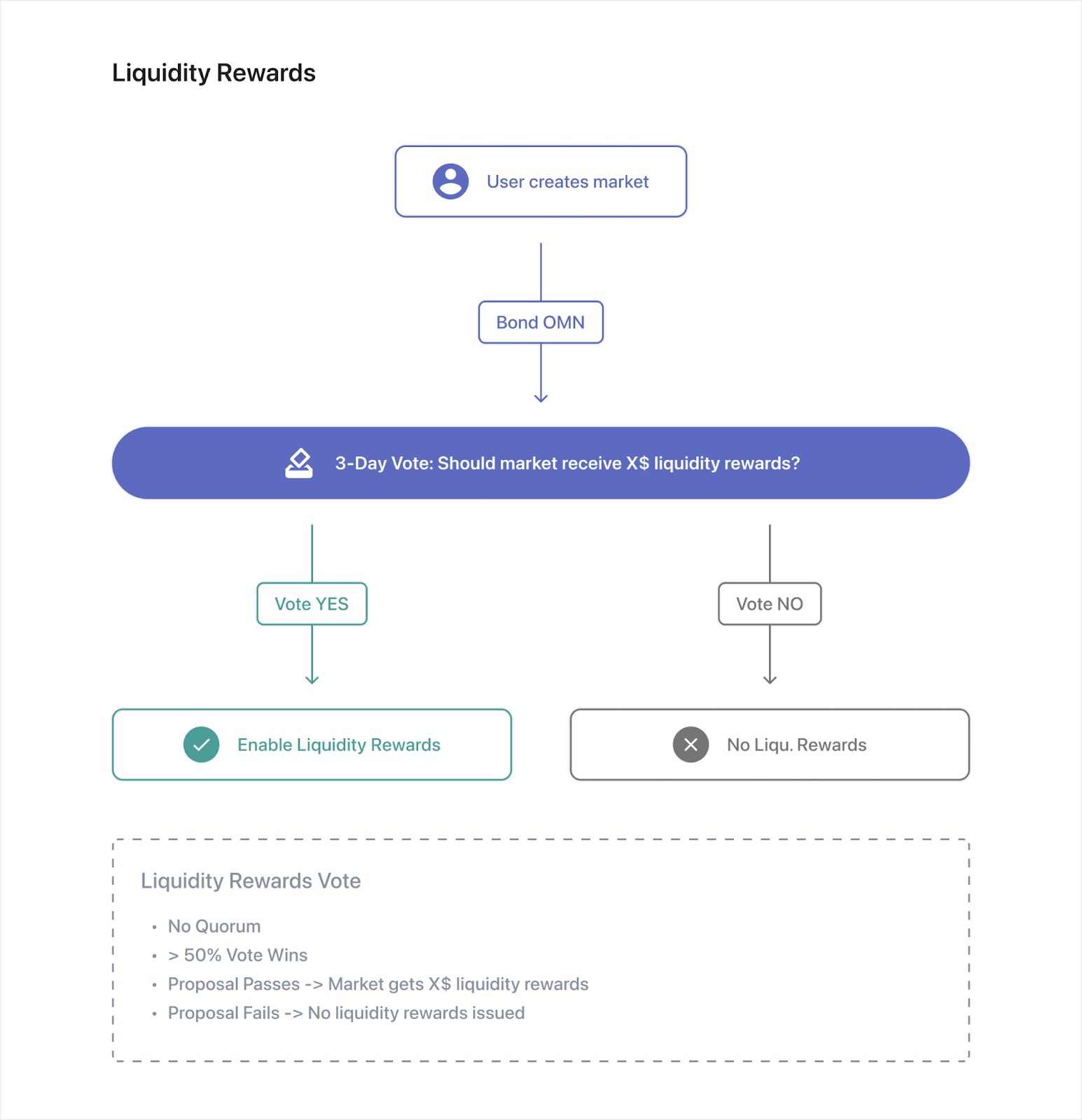 The Omen Guild is a lightweight, flexible governance system that is able to not only implement protocol upgrades, but change predefined governance processes, like Market Verification and Liquidity Rewards. 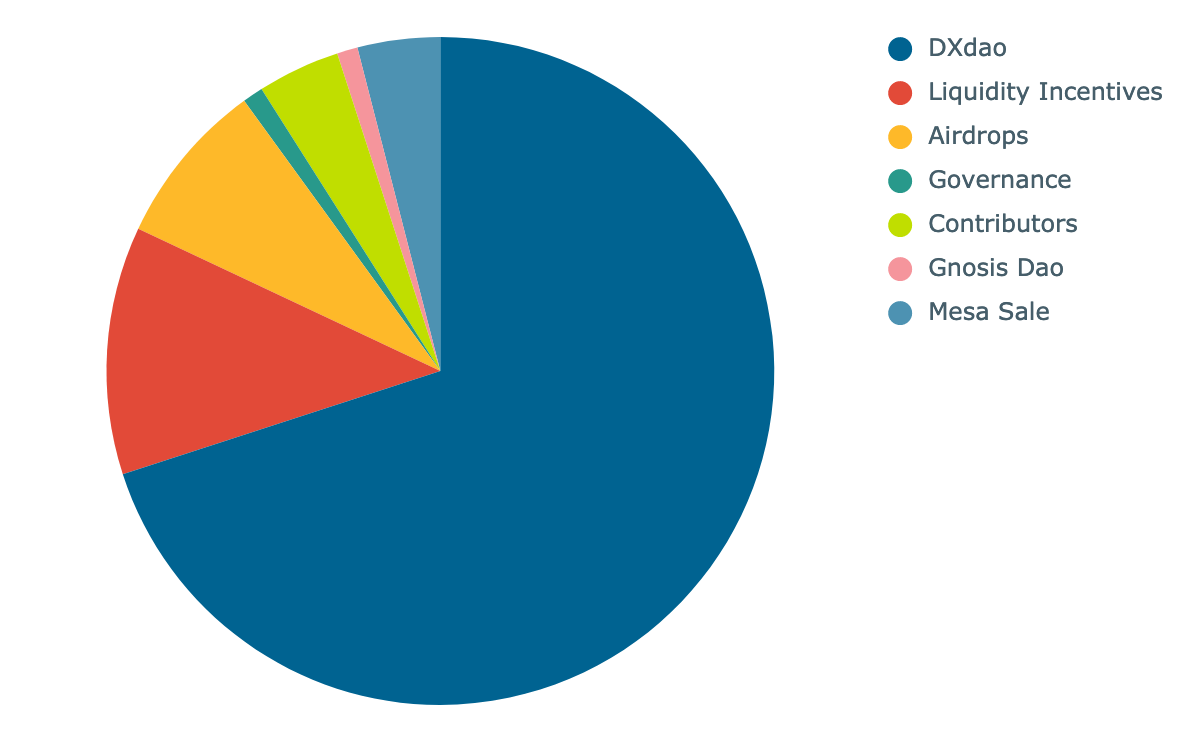 Omen is a product of DXdao. Its operations and development are supported through DXD holder funds, which make up the DXdao treasury.

70% of OMN tokens are held in the DXdao treasury for two purposes:

DXdao does not intend to use OMN tokens to directly participate in Omen Guild governance. This is the job of the Omen Guild.

Liquidity Incentives: 12% [12,000,000 OMN] for liquidity incentives in the first year, with the following breakdown: 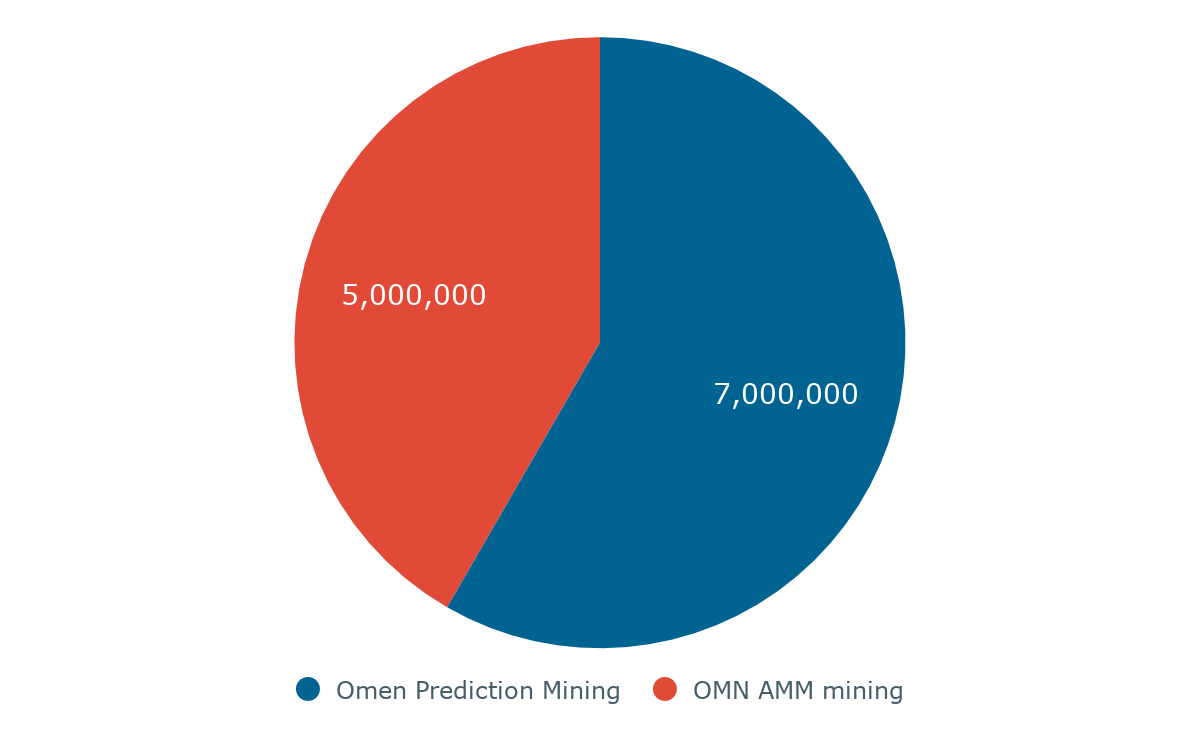 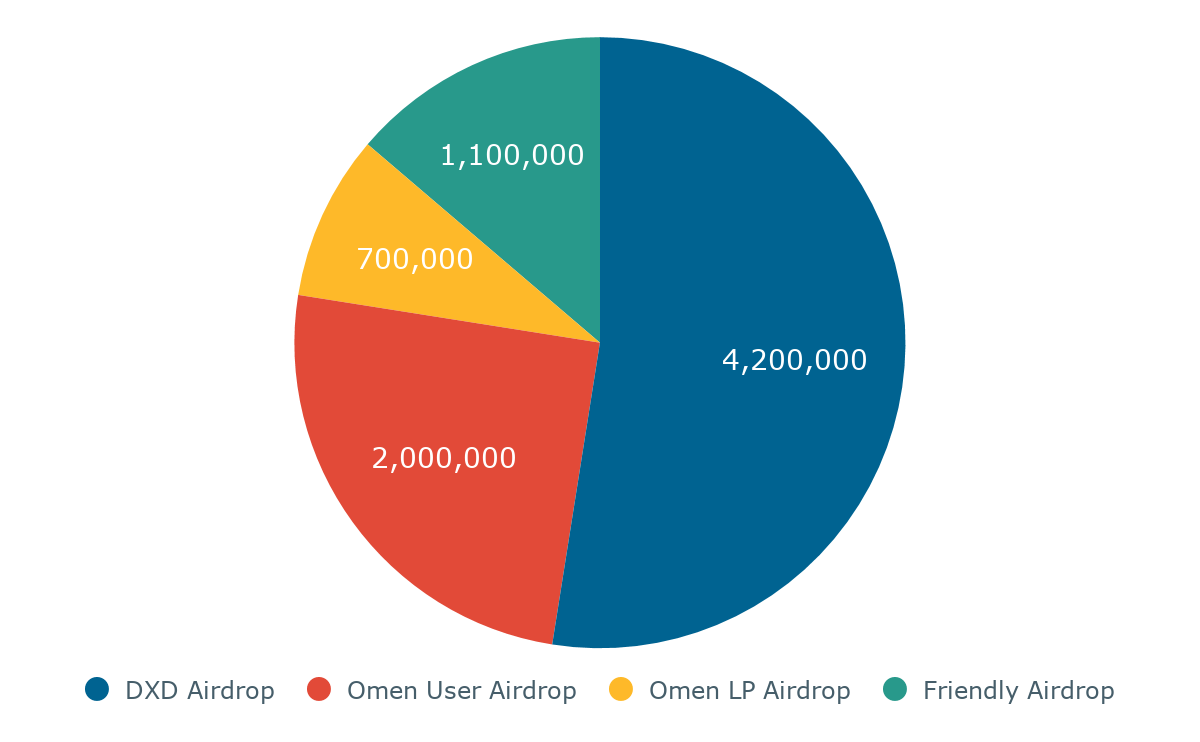 Chart1200×742
DXD Holders: 4.2% [4,200,000 OMN] more than half of the total airdrop allocation will be claimable by addresses holding DXD. The DXD holder airdrop is weighted, based at time of Snapshot.

Omen Users: 2% [2,000,000 OMN] claimable by any address that has traded on Omen mainnet or xDai before May 1st, 2021, as long as that user’s predictions have totalled at least $25. The Omen user airdrop is not weighted.

Friendly Airdrop: 1.1% [1,100,000 OMN] reserved for future airdrops on communities of interest in the DeFi ecosystem.

The following bar graph shows the distribution of the OMN airdrop to community members on a per address basis. 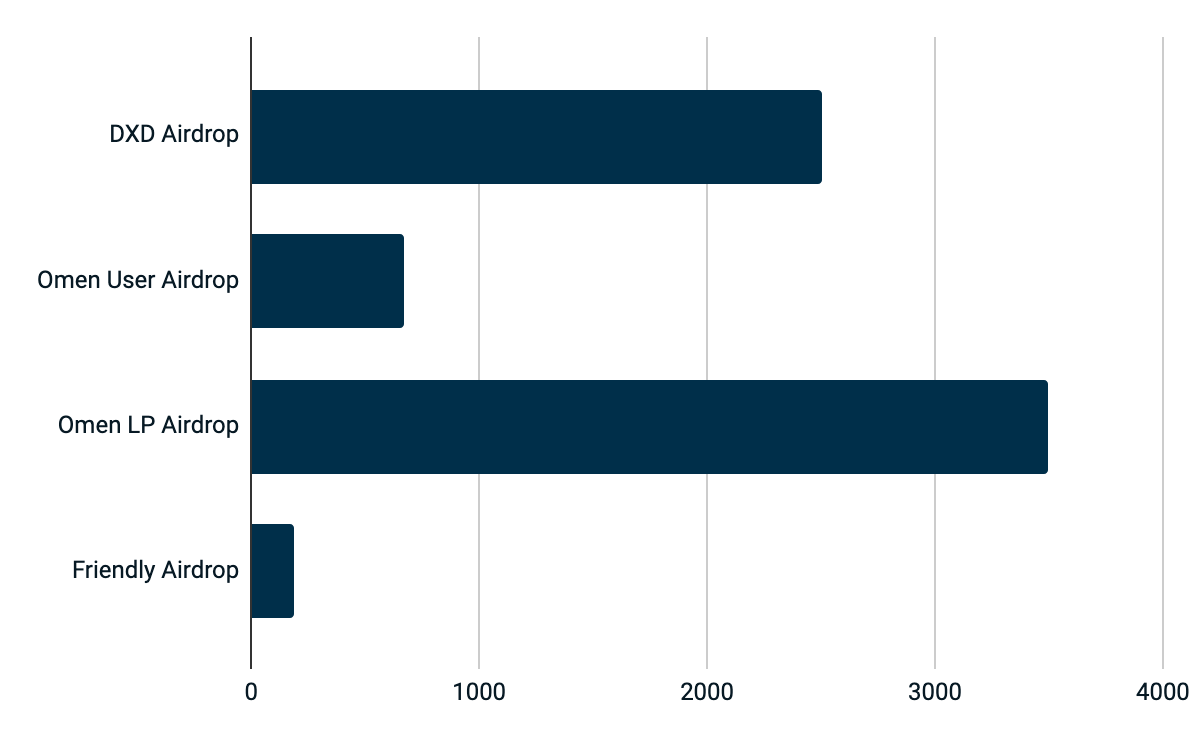 Gnosis worked with DAOstack to launch DXdao and build the Conditional Token Framework used in Omen. Their focus has since shifted away from prediction markets.

However, there is renewed communication between both DAOs to collaborate both on liquidity incentives and longer-term protocol upgrades. An agreement for future collaboration between DXdao and GnosisDAO could lead to changes in this allocation.

A Mesa sale is dependent on a Mesa MVP at the time of OMN Token launch.

has snapshot for DXD holders already been taken?

Following a private chat with @geronimo, I would like to apply to join the Omen Squad.

Keep up the good work!

A snapshot for DXD holders has not been proposed yet.

@Tammy @pulpmachina @corkus Great work guys! This is very clear and articulate. Can’t wait to see how it unfolds