The topic of an Omen Guild and OMN token has been discussed in recent DXdao Product Strategy meetings. This post has been prepared by @sky @corkus @Powers and myself.

DXdao seeks for Omen to become an unstoppable, permissionless, community-driven prediction market platform. Omen’s underlying infrastructure is modular, enabling it to use different trading venues, oracle providers, and arbitration services. In order to increase community engagement and advance development of Omen, this post proposes the creation of an Omen Guild. Omen Guild would be a part of the DXdao ecosystem and be delegated the responsibility to oversee the progress, governance, and success of Omen.

We propose an Omen token, OMN, to power the Omen ecosystem and Omen Guild, bringing Omen closer to being a true community-led project.

The goal of this post is to lay out the ideas for Omen Guild and OMN token, highlight the benefits to DXdao, DXD holders, and Omen users, while also exploring how the Omen Guild will work and what the OMN token can do. This post also provides an open forum for all community members to have the opportunity to voice their ideas, questions, concerns and input about this new framework.

DXdao’s hope is to leverage its amazing community to help position Omen to continue to be the unstoppable, permissionless prediction market platform with the best user experience.

DXdao recognizes that a product focused team merged with a community of users has the potential to become a powerful driving force. Omen Guild would be the formal creation of an entity that is that driving force behind Omen. It would have several responsibilities.

DXdao would delegate operational control of Omen to Omen Guild, including the management of partner incentives, approval of product updates, curation of Omen related lists, and potentially even management of the budget for Omen development.

An OMN token will enable the Omen Guild to govern more effectively, engage the community and attract new users and liquidity.

OMN token powers the Omen Guild and Omen ecosystem at large. OMN token holders will have a number of important privileges and responsibilities.

OMN token will receive the profits from the Omen platform. It will be used in the Reality.eth oracle service as the staking token. It will be used by market creators and liquidity providers to promote their market in the UI. It will give its holders governance power in the Omen Guild. And more.

DXdao owns and operates several products, Omen, Swapr, Mesa, and Rails. DXdao aims for these products, and other future products, to generate revenue and profit. Currently, DXdao’s profit is sent to the buyback reserve of the DXtrust, increasing the value of DXD. While DXdao’s ecosystem of DeFi dapps holds a lot of promise to be very powerful together, having one token to represent many dapps limits the degree of control of the token holder and of DXdao.

If an investor wanted to invest in Omen, but not in Swapr, their only option is to buy DXD. Similarly, if DXdao wanted to provide liquidity incentives on Omen, its only option is to use DXD, adding to the circulating DXD supply for the benefit of one product without a clear feedback loop. In addition to a lack of control, DXdao has a brand recognition problem, people often do not recognize products as being owned by DXdao. While this is partly an issue for product branding and presentation, it can generally be expected for DeFi projects to have a token representing them. Whether one is looking on Coingecko or on DeFi Pulse, nearly all the projects have a single token associated with them corresponding to one product. This also means people do not see DXdao products in some of their go-to lists, and that they are often not inclined to take a deeper look at what a token really represents.

The establishment of the OMN Token and Omen Guild addresses these problems, allowing DXdao more flexibility and establishing Omen more clearly in the market. At the same time, DXD remains the overarching token for the DXdao ecosystem and profits from the collection of products. Revenue and profit from Omen will flow to the Omen Token and DXdao will retain a majority of Omen Tokens and funnel the Omen profit it receives to the DXtrust.

Benefits of the OMN Token to DXdao Ecosystem 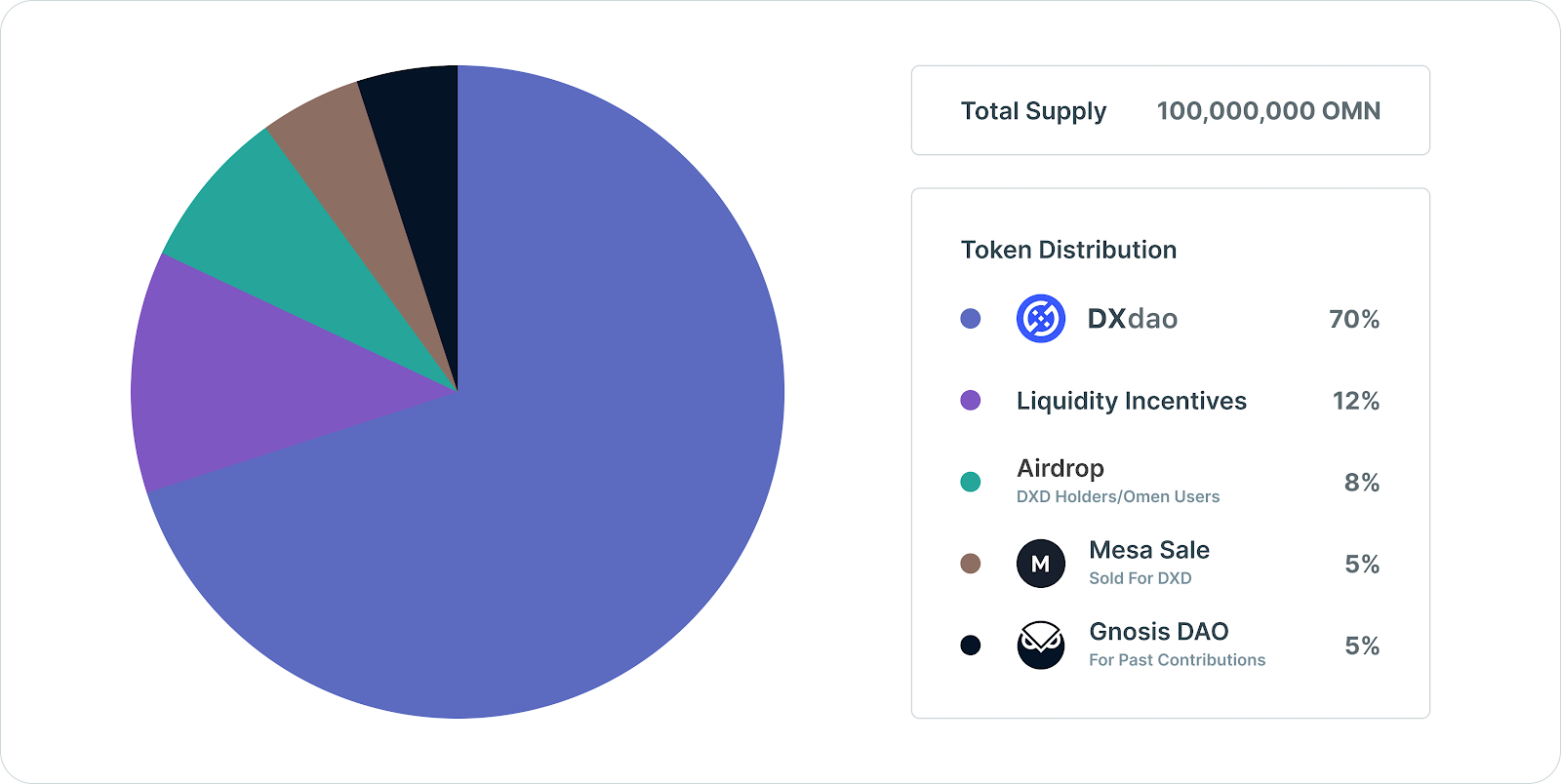 DXdao (and DXD holders) should be the primary owner of OMN token.

DXdao owns Omen and therefore most OMN tokens will go to DXdao or DXD holders with a portion being set aside for Omen users, for liquidity incentives, and for GnosisDAO as a reward for all of the contributions it has made.

70% to DXdao - The majority of tokens will be held by DXdao in its treasury. The primary purpose of these tokens will be to direct Omen profit to DXD, but they could also be used in the future to further incentivize partners or the Omen community. They will only be dispensed from the DXdao treasury when there is expectation of a net gain for DXD holders.

12% Liquidity Incentives - Liquidity is of the utmost importance to making Omen attractive to users and a sizable chunk is set aside for this purpose. Note this is the initial amount set aside for liquidity incentives, but DXdao could assign some of its 70% in the future for further incentives. In addition to incentivizing liquidity on Omen, a portion of these tokens may be used to incentive liquidity on Swapr for collateral tokens or the tokens of Omen integration partners.

8% airdrop - Most of this airdrop will go to DXD holders, but a portion will also go to Omen users and liquidity providers.

5% to GnosisDAO for past contributions - Gnosis worked with DAOstack to initiate the DXdao, built the Conditional Tokens Framework used in Omen, laid all the ground work for the first version of Mesa, and also contributed other resources to Omen including grants to Protofire for development. This is to acknowledge all those contributions and signal that DXdao intends to continue collaborating with GnosisDAO.

5% sold on Mesa for DXD - The goal of selling OMN on Mesa is not to raise capital. The purpose is to provide a sink for DXD tokens, to ensure sufficient liquidity for buyers, and to showcase the new Mesa auction platform.