Swapr team has been hard at work and preparing for the upcoming Swapr Beta release. One of the most exciting new features is the ability to launch new liquidity incentive programs directly from the UI. This has been audited and tested on Rinkeby and there is a test with real funds live on xDai now.

DXdao should consider allocating funds to sponsor liquidity incentive campaigns to coincide with the Swapr Beta launch. This would bring some additional liquidity and trade volume onto Swapr for the launch, while also demonstrating the capabilities of Swapr’s farming platform, which could help get other projects to launch campaigns on Swapr.

Here’s a proposed plan for a targeted campaign on both xDai and Mainnet that would last 3 weeks. Polls below to gauge the community’s interest in launching a Swapr farming campaign. Please vote! 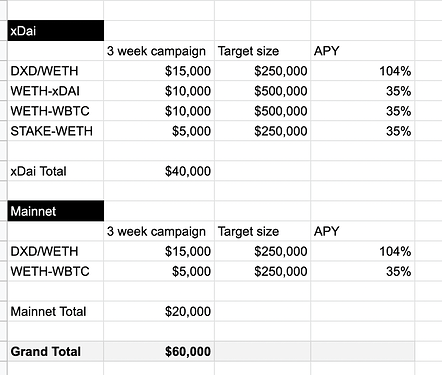 Should the farming campaign be on xDai and Mainnet?

How long should the campaign go on?

How much $$$ should DXdao allocate?

DXdao should incentivize these pools (vote on all that apply)

What token should DXdao use for the rewards?

If there is consensus from the community, we can move forward with formal proposals. Eager to hear other thoughts or ideas below.

It would be interesting to consider some multi-rewards. I do think having DXD, even a small amount, makes sense to be distributed here alongside ETH and/or DAI.

Overall a great initiative, excited to see this move forward!

Tank up and pedal to the metal!

What if we did intermittent incentives, e.g. every other day? It would be too short a period to pull funds, and we double the time. Would it be too much trouble to set up?

DXD liquidity is pretty weak on mainnet so I would be in favor of higher targets, a million dollars of total liquidity in the DXD/ETH pool on mainnet, and maybe half of that for xDai. Also agree with @KeenanL that DXD should be used alongside ETH. While I don’t want to see DXD become a “farm/food” coin I do think a couple months of DXD based incentives to coincide with Swapr Beta would be a strong move and provide a nice transition into the start of product token launches, which can then be used to continue incentivized liquidity on Swapr. Silver lining of DXD having relatively few exchange listings is that there is an opportunity to drive liquidity on chain, which is favorable from a perspective of decentralization.

On the flipside, I do not think it makes sense to incentivize pools where there is liquidity being provided from the DXdao treasury. The best way at this point to increase the liquidity of the non-DXD pools mentioned above is to allocate more liquidity from the treasury. While I think incentivizing DXD pools alone would be a good start here, I think the natural next step would be looking for partner communities to offer dual incentives with, potentially 1Hive, GnosisDAO, or others, to grow the liquidity of their tokens on Swapr.

would be in favor of higher targets, a million dollars of total liquidity in the DXD/ETH pool on mainnet

I personally 100% agree with this (after a first security test, to avoid losing 1m :P).
We need LPs on DXD/ETH on mainnet. At the current price of DXD, the impermanent loss risk can be viewed as a way to do buyback at a vary favourable price.

Generally I prefer to wait for SWPR token to go aggressive with liquidity mining so I’m with going small for now, but the liquidity targets proposed here are even low for precious DXD pre-SWPR standards. If the main goal for this is to be an in-production multi layer test then fine. But as a marketing push, an already very small “grand total” number is further reduced by diluting the grand total across perhaps too many pools & layers.

Great initiative, but personally I’d double the Grand Total and/or sniper more.
Pools to stay (all on xDai) DXD/WETH , WETH-xDAI, STAKE-WETH
Pools to cut: everything else or keep mainnet DXD/WETH with smaller weight than the xDai one.

There was also consensus that we should use all four farming campaign types (standard, timelock, staking cap, and multiple reward campaign). DXD/WETH should have two rewards and I think it makes sense for DXD to be used for the timelock campaign.

I prefer giving out ETH, because I think DXD is undervalued, but it’s nice to show the features and also helps the impermanent loss risk. No one gives out ETH in a farm yield, so it should be pretty attractive. There’s $880k liquidity total in the DXD/ETH + 2 Balancer pools.

Consensus seems to be building towards a SWPR token, hopefully coinciding with the Arbitrum launch. Those discussions probably need to be a bit more serious.

Is $80k the right number for a 3 week campaign, split evenly between DXD and ETH awards?

Are the 3 targeted pools the right ones?

Should the campaign be 3 weeks long?

I think it will be important to keep activity and momentum up going into a Swapr token launch. Since it is unknown when that would be, 3 weeks might come up short. Personally I would prefer to overshoot a bit rather than undershoot. It’s also possible to re-up this campaign after it expires but I think it would be preferable to commit to a longer campaign upfront as this will be more attractive to liquidity providers.

Would also rather overshoot than undershoot. Obviously, if we extend campaign duration we also have to increase grand total to meet liquidity targets. Uniswap v3 and real L2s are on the horizon. The opportunity for Swapr to shine on xDai is now.

We had a robust discussion on Swapr beta’s farming campaign on Friday’s Product Strategy chat. There was consensus on farming campaigns for DXD/WETH & DXD/ETH on xDai and main net, but the conclusion was we should wait to decide on the ‘showcase’ farm. Discussions with HNY and others this week will help determine that strategy.

But I think we should move forward with proposals for the DXD/WETH pools now. We had soft agreement on a campaign that would vary by format and length

The Timelock campaigns should be attractive because they are also capped, so in a way the APY is ‘guaranteed’. Of course, locking up capital comes with risk, so it should be rewarded. The standard campaign should still have an attractive APY but allow farmers to deposit and withdraw freely.

Next steps
We’ll need DXD in xDXdao base…but hoping we can get there in soon as the Buyback Signal proposals starts. There is enough WETH there (98 WETH) to launch a campaign (9-10 WETH needed).

And then for main net, we’ll have to wait until the Standard Multicall Scheme passes in 9 days but that should align with Swapr Beta release anyway.

Started a related thread with an idea around the additional ‘showcase’ farm.