This is good in some ways (more DXD in the hands of more people, likely better decentralisation), but it also bad in a way.

My personal interpretation for (1) is that the whale feels like it doesn’t really own his share of the treasury, and it’s better to exit till there is time. This does not deliver a good marketing message. And it is also kind of unfair (imho) to the whale who likely did put more money in the table (in ETH) that what they are getting out.

So below is a sketch of a proposal, basically to implement a semi-permanent buyback mechanism.

Allow, at any point anybody to sell their DXD back to DxDAO at the fixed price of

What this proposal achieves?

All in all I think such mechanism would communicate to DXD holders:

You own a piece of DXdao, and therefore also of the treasury! If you are in a hurry to cash out, you can, but at a discounted (by the P factor) price.

What do you think?

The given interpretation is a wild guess. There have been billions in liquidations lately. Most of the market is in red, and Bitcoin is down 17.31% from last week. There are a lot of reasons why people sell any of their assets.
The formula in the proposal, given ETH is almost at its all time high now, returns a price of ~$754. Then we have a bigger problem with arbitrage.
You have a perfect business opportunity to open an OTC desk, but a DAO cannot do that.
If anyone’s been following what’s happening, selling is the worst they can do, unless they are forced to do so by market or personal contingencies.

The given interpretation is a wild guess.

The formula in the proposal, given ETH is almost at its all time high now, returns a price of ~$754.

Then we have a bigger problem with arbitrage.

What problem? Arbs will adjust the market price accordingly.

Why not?
Many DAOs buy-back their tokens, and also real-world companies!
MakerDAO (MKR) being of the largest examples of DAO systematically doing buybacks.

In the case of Maker, there has been discussions to do that when the ratio,
Yearly_Income / PRICE_of_MKR
(i.e. the P/E of MakerDAO viewed as a business) is below a certain treshold.

In the context of DXdao, 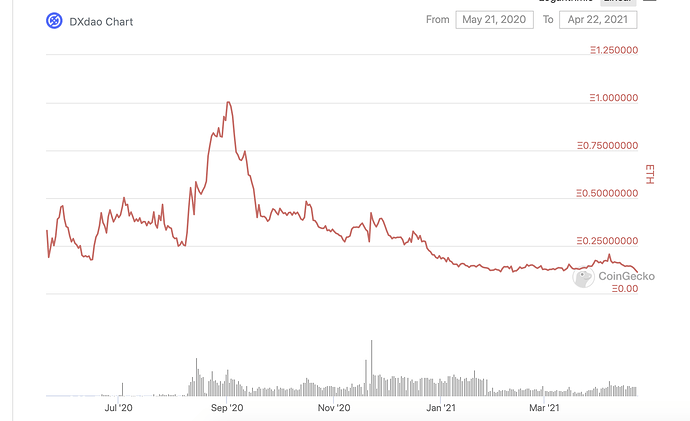 buying back with the proposed scheme corresponds to make a killing, since the average buy price was much higher than that.

There already is a proposal for a proper on-chain open market buyback.
No company offers a buyback at double the market price. Any speculator who’s not interested in fundamentals could buy cheaper on market and then dump. That’s destructive.
The chart is irrelevant. Gold’s been appreciating significantly the last 5 years and yet paired with BTC for the same period, it would look as if it has been a bad investment.
If you denominate DXD in ETH, what would happen when ETH reaches $10k?

The chart is irrelevant.

Not if people bought DXD for ETH from DxDAO.

If you denominate DXD in ETH, what would happen when ETH reaches $10k?

That our reserves will grow 4x as well.

I have been talking about ETH just because ETH constitutes the large majority of our treasury, so it makes sense to measure DXD in those terms.

There already is a proposal for a proper on-chain open market buyback.
No company offers a buyback at double the market price.

Yes, I agree with that.

But once the DXD price gets to the desired level (after the buyback) I think it makes sense to establish a floor.

Anyway, establish the floor was the point of my proposal