Hey, This is Venky, from etherlabs AB to provide services to DXdao and Swapr around product management and support in QA, bizdev, governance and operations.

Responsibilities for July to September 2022:

Swapr goals, milestones and roadmap:
Swapr squad discussed together about a possible roadmap for Q3 and features that would be interesting to solve and release during this period.

The priority for Swapr for Q3 and Q4 would be to launch on new networks and provide great UX for all traders, projects and partners that will be using Swapr.

The squad sat together in a series of sessions to understand the features, its rank on priorities, estimate and then perform an impact assesment.

The list of features that were discussed are as below in the order of priority: 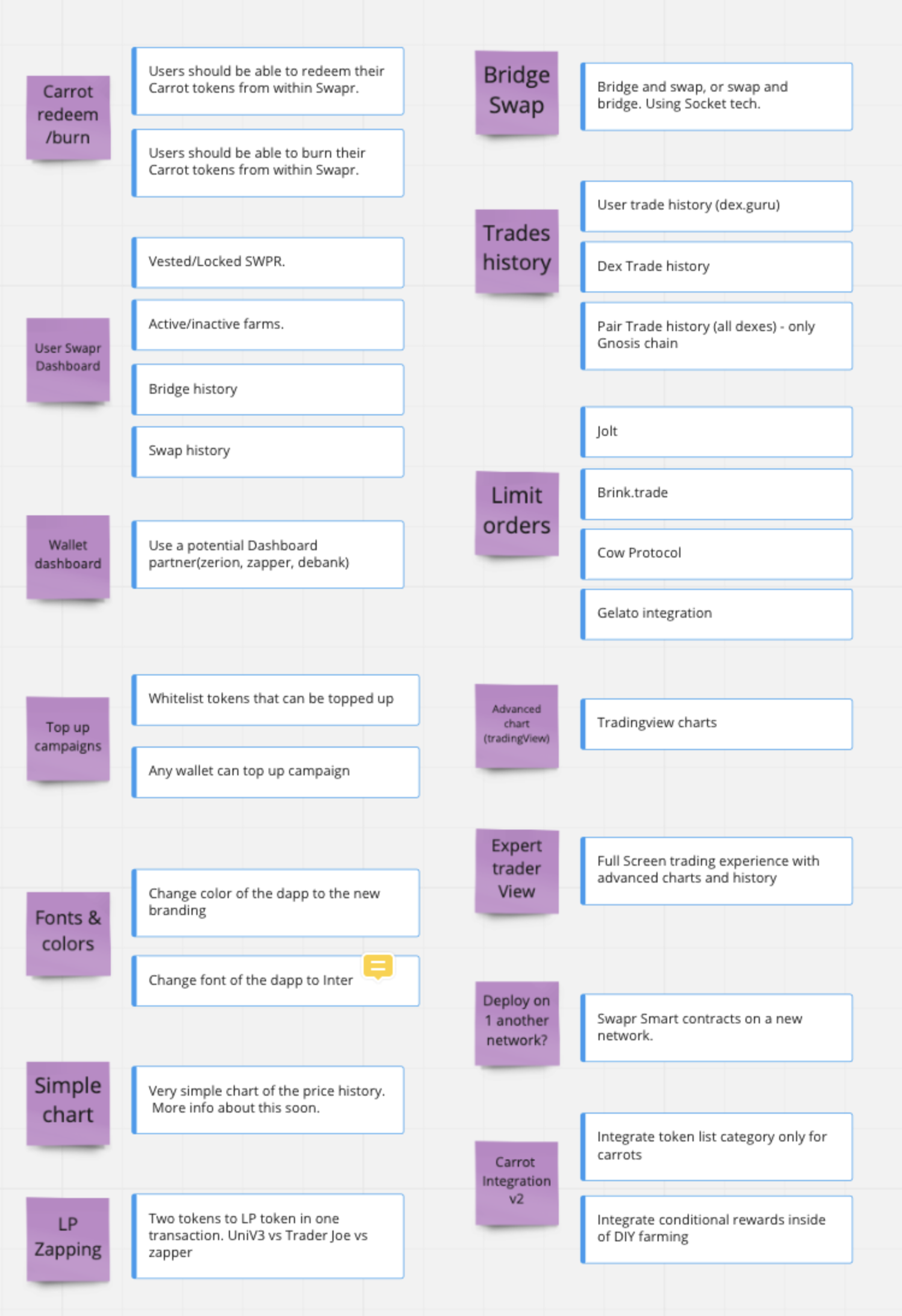 From the list, we arrived at the estimates by discussing with the squad together. These are estimated in weeks and should be considered these are just estimates

With the features and the estimates, we did a prioritisation matrix and we took into account how effective these features are against each other in terms of giving value to users. 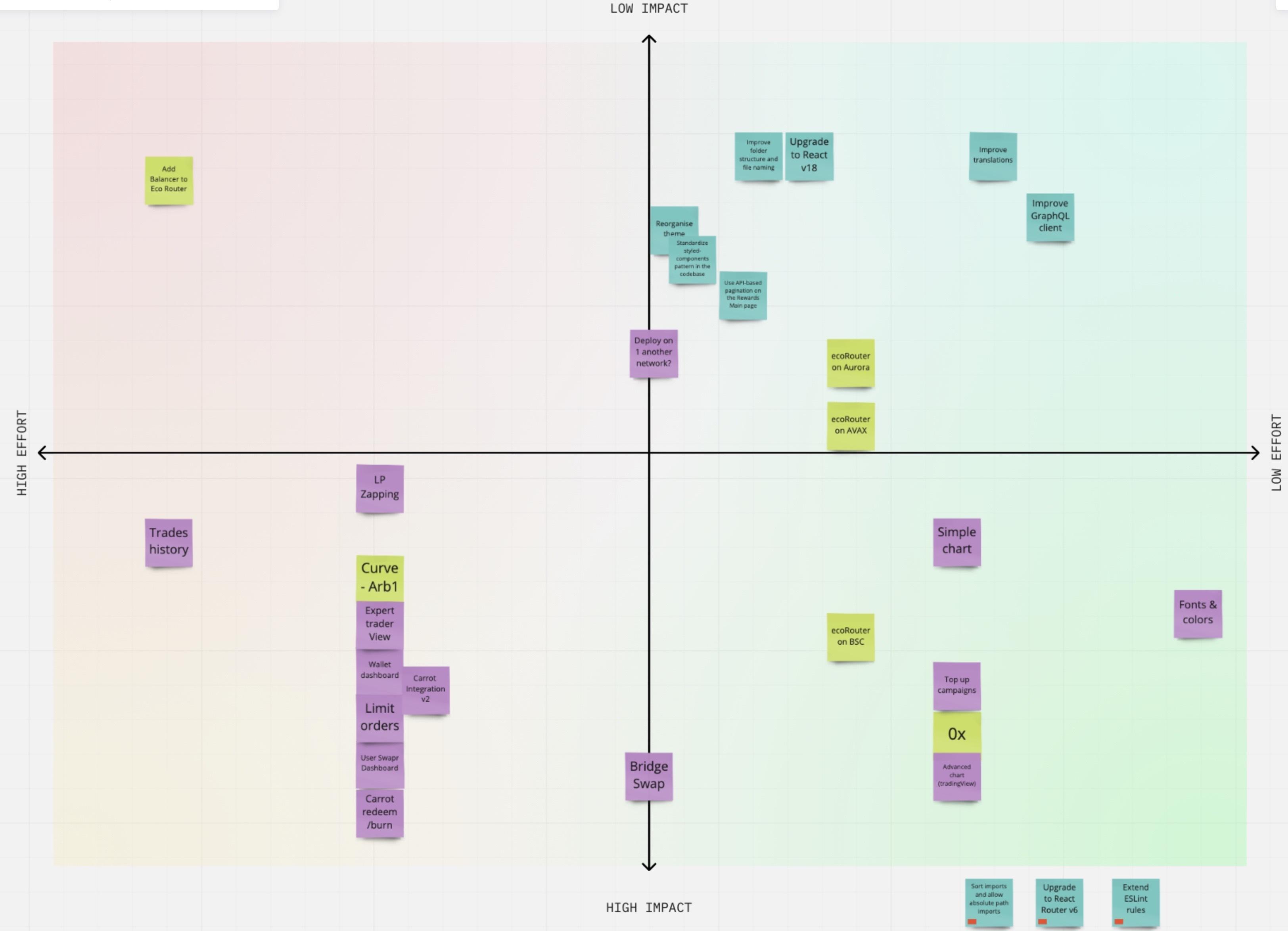 We would like to keep in mind that the roadmap is still elastic and will be affected based on how the AMM, bridging and dex aggregator ecosystem evolves and moves forward.

Link to Miro board: Miro | Online Whiteboard for Visual Collaboration

Team Tokens:
From this Q3, we would also like to introduce team tokens as a way to encourage contributors to complete and release features. Based on the feature’s impact, estimate and complexity, each feature will be given a certain weight, calculated manually by me

A seperate daotalk post and proposal will be created to vote and decide how much of SWPR should be allocated per quarter, what should be the vesting principles, how would the distribution look like and how do we deal with the contractors’ distribution within Swapr squad.

Currently, with an intended allocation of 500K SWPR for the Swapr squad, this is how the feature wise distribution looks like. 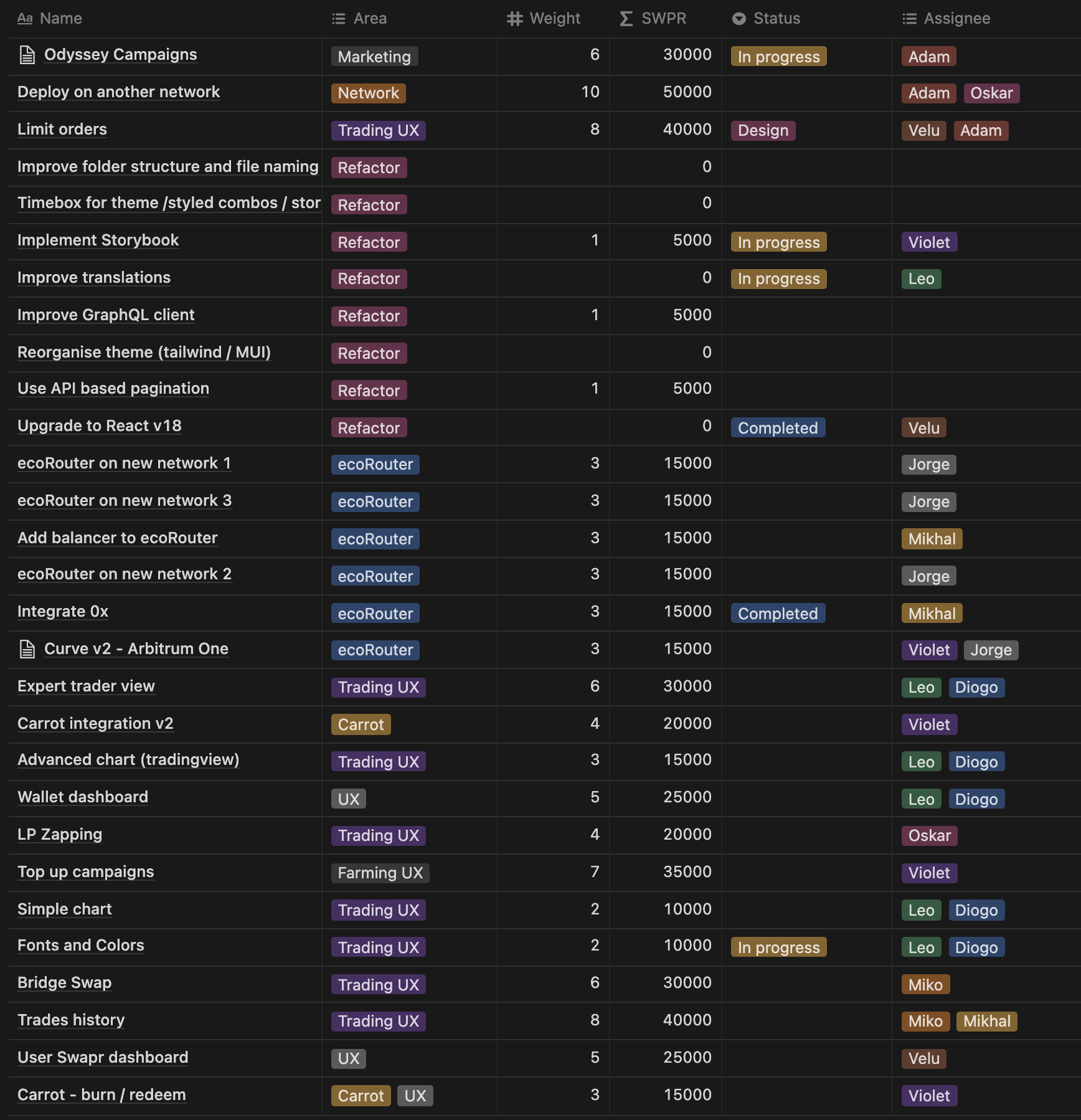 If there are any new additions to the roadmap, we will need to have a discussion around how to allocate team tokens for the ones that snuck in.

Experience level : 6
Time commitment : 100% July to September. I might take a few days off in August to have some time with the family. I will let the squad know the dates and reflect it in the payment accordingly. As part of this proposal, I will ask for payment for the month of July and then take payments for August and September retroactively.

For the month of July and August, these are some of the work that I contributed with:

Tasks that I have been working and coordinating on:

Experience level : 6
Time commitment : I was away for 1 day in July that was already paid for and I was away for 4 days in August on a vacation. I will deduct 16.6% of the month’s pay and would like to request a compensation of

Hey, This is a payment proposal for the month of September.

Tasks that I have been working and coordinating on:

Highlights:
SEO discussion was very good and its pretty good that we are looking into this right now (even though its pretty late).
LP Zapping, where users will be able to zap into a liquidity pair across any dex from within Swapr.
Testing of advanced trading mode and priding constant product feedback.

Lowlights:
Personally, I was a lot stressed with the kind of discussions that were in the forums about restructuring and refocus. Even though it is much needed, it didnt go well in a healthy way. I hope DXDao will find a good way to have these kind of discussions. I hope DXDao builds 100s of products with a focus on decentralisation and we need to constantly be having these tough discussions and decisions, but not the way we had the past month.