In December 2021, the DXdao community passed an on-chain proposal titled “ETHDenver 2022 Sponsorship On-Chain Proposal” to officially support and sponsor ETHDenver 2022. As of last Friday the Hackathon winners were announced and now ETHDenver has officially ended. ETHDenver was a monumental success for DXdao. There were so many exciting aspects to ETHDenver, from solid representation on the stage to a booth flooded with visitors, that a summary of some of the most important moments seemed appropriate. Aside from the many new friends, ideas and business connections made, it was once again a wonderful opportunity for the contributors to meet up IRL, which adds to the DXdao contributors’ synergy and comradery.So without further ado, let’s get into the nitty gritty.

“The Booth’’ was the home base of DXdao during the ETHDenver week. It was a place from which DXdao could spread its name, foster new connections and hand out “DXswag”! DXdao rocked ETHLisbon with some memorable DXdao branded goods, and ETHDenver was no different. With a growing reputation for “Quality Swag” in the community, ETHDenver only served to solidify this. The Copenhagen Flames jerseys, DXdao sweaters and DXdao beanies were a major hit amongst contributors and the public alike (including Buffie

), being on full display in a multitude of settings [1]. They were even grabbing attention in the most unexpected places for the strangest of reasons! @ayyyeandy “At the airport wearing that DXdao Counterstrike esports shirt…” 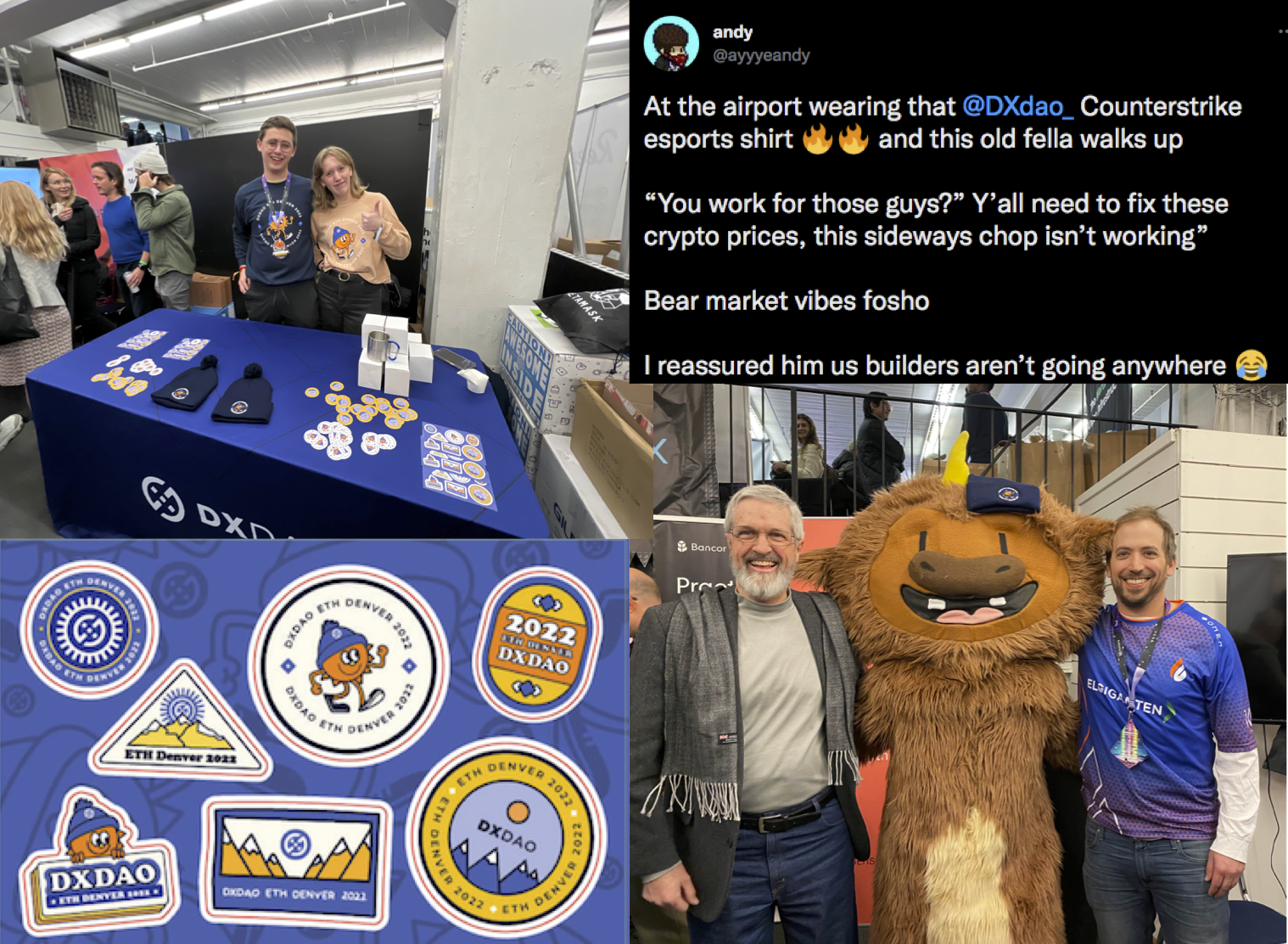 The unexpected bright spot of the DXswag was none other than “Sunny” (not official, just the nickname floating around). This little ray of sunshine captivated the EthDenver crowd and quickly became a fan favorite. Sunny immediately became associated with DXdao, to the point where he could be considered the unofficial mascot of DXdao. It’s not difficult to see why, with such a friendly face! 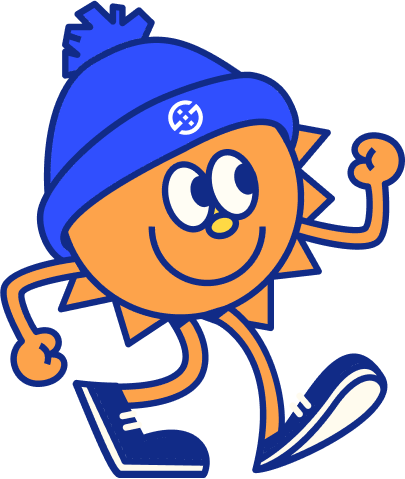 DXdao took center stage at ETHDenver while presenting its current and future governance models, especially since “governance” and “DAO Tooling” were the buzzwords on everyone’s lips. It quickly became clear that DXdao’s governance structures are of the most advanced and refined in the space and DXdao seems poised to retain this positioning into the future.

DXdao contributors were involved in three presentations over the course of the week. They both highlighted DXdao’s current governance structure and methods of operations and presented its future Gov 2.0 (still in development).

First up was Chris with “Rock the boat (vote) to better DAO governance”.

Chris, Lauren and Tyler went over everything from what was being used by DAOs right now for governance, to more strategic topics such as the “benevolent dictator”, questioning if there is space in decentralized governance for this role. This was an awesome discussion around “better DAO governance” with an incredible amount of material covered in the mere 30 allowable minutes! This is a must watch for any and all DAO enthusiasts!

Next up were Chris, Ross and Augusto, presenting the DAO governance model that aims to unlock the full potential that DAOs have to offer: Gov 2.0. Chris kicked it off with an energetic “Awesome! Welcome!… We are contributors to DXdao … over there is Ross and Augusto and today we are going to talk about governance structures! DXdao is a fully on-chain organization so everything we’re going to talk about is how we coordinate through different voting mechanisms on chain”. From that point on it was a thrilling ride into the future of DAO governance modeling, with an exciting presentation of Gov 2.0 and the potential it holds, not only for DXdao, but for all DAOs in the space.

After that Sky represented DXdao onstage in another exciting panel, Future-proof Governance Frameworks.

The panelists were presented with the idea that current DAO governance and tooling are rudimentary at best, especially considering the massive treasuries and power DAOs currently have, and that DAOs have basically just become targets for attacks.

Sky eloquently and confidently conveyed that a DAO’s true strength lies in decentralization. He pointed out DXdao’s unwavering commitment to decentralization and on-chain governance is the key to its success and sustainability, in both governance of its resources and resiliency to both financial and social attacks.

This was another fast paced panel that highlighted how “permissionless decentralization above all else”, which was already embedded into DXdao, is paramount to building a resilient DAO.

Well not really. Being a sponsor for ETHDenver allowed DXdao to also partake in the ETHDenver Hackathon, both IRL and virtual. There were a multitude of exceptional entries and in the end DXdao was very pleased to announce the following bounties:

@CupOJoseph won the Carrot Bounty for an innovative Carrot style yield farming, locking NFTs, and, in true Carrot fashion, only releasing the NFTs if overall goals of the campaign were met!

The Kudos team used DXdao’s Guilds to realize their vision of “Rewards and Incentives for Farmers and Food System Supporters” and won both the IRL and the Virtual bounties for their submissions. The Kudos aim[s] to incentivize and reward participants with the objective of securing food supply. The submissions also include an explanation video

The Hackathon was an excellent opportunity for DXdao to meet new developers and further expose the developer community to the amazing products being built by DXdao. Some of the participants have already contacted DXdao and expressed interest in further exploring/working with DXdao beyond ETHDenver.

EthDenver seemed like a whirlwind of events. Days blended together with moments of sleep in between. This does not however mean that things passed by without anyone noticing.

Contributors collected their thoughts and experiences, and were kind enough to share them in a variety of posts in the days and weeks immediately after.

Sky commented on the growth of ETHDenver and how things have changed: “ETHDenver and the week of surrounding events appears to be the largest Ethereum event to ever take place. It was huge, almost too huge” and also noted that “the OGs in the space are starting to mention and sometimes reference DXdao more often especially in conversations around governance and DAOs.”

Chris gave us “The DXdao Pitch”, stating the following:

Ross added to Chris’s statement: “Not sure my thoughts around EthDenver requires a new thread so I’ll hop on Chris’s since most of what I will say likely relate.”

Keenan pointed out “The first and most blatantly clear finding is how excessively far ahead DXdao is as an organization surrounding its governance” and doubled down on a decentralized vision.

It was not all work and no play, the team took time to enjoy the event and each other’s company. While this was not Vegas, it’s been decided the same ethos will apply, slightly adapted for DXdao, “what happens at conference, stays at conference” and on that note, we say goodbye to EthDenver 2022.