This audit scopes out the last changes to what we have been referring to as Gov 1.5. This would mean we have new versions of every part of the dxdao governance architecture, except for the voting machine.

The reason the split was made here is so that we can do a parallel deployment of DXdao using these new contracts and begin migrating over to them. This will allow us to focus on this new system and get comfortable with how it can operate and deliver many security fixes to make DXdao safer.

This would then also allow us to focus exclusively on the new voting machine logic when it is later upgraded. Because of the architecture of our governance, we can very easily upgrade the voting machine without redeploying all of the contracts being audited here.

This audit marks the second audit in the diagram below: 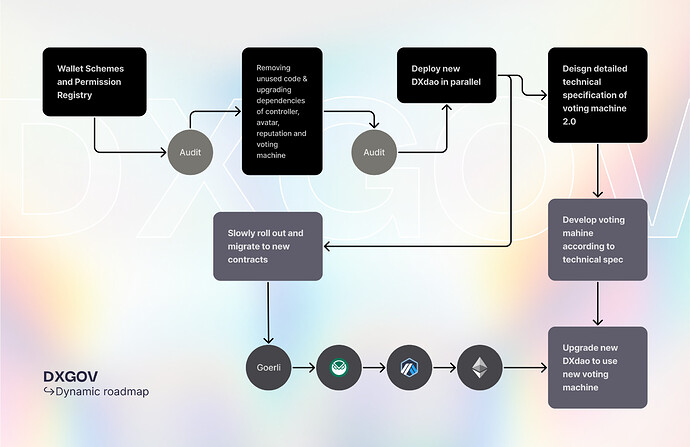 So this audit includes the recent work done by the DXgov team which cleans up the daostack contracts:

The cleaning up here consists of upgrading solidity versions, upgrading dependencies and removing old code which we don’t use or can just be implemented better.

It also upgrades the wallet scheme to allow an identical voting style to guilds with more than two options available. This will be the second audit of this voting style and allow for easier integration in DAVI and more powerful proposals.

The new audit builds on the old audit covering the new changes made and assessing them in the context of the larger system.

This proposal will transfer $10,000 and act as acceptance of the audit agreement found here

Another $10,000 will be transferred upon completion of the first report.

This audit will cost $30,000 in total paid to Omega team who have an existing understanding of the daostack architecture we are forking and have done good auditing work for us in the past on governance and carrot.
This falls in line with the estimated auditing budget for DXgov laid out in this budget report

The successful completion of the audit will enable us to deploy DXdao with governance 1.5 moving even closer to gov 2.0