Tldr: some data on DXdao proposals over the years. You can download all the data here or just look at the charts below. Feedback and commentary appreciated!

DXdao passed 2 years of on-chain governance over the summer. There have been hundreds of proposals that have flowed through DXdao, xDXdao and DX-a1-dao (still trying to make it work…). I thought it’d be helpful to look at what these proposals have been to understand where DXdao spends its governance time.

This taxonomy could also be helpful for establishing more formal processes around different proposal submissions. It also might be helpful as the DXgov team moves to scheme-ify DXdao governance.

Eager to hear feedback; of course, some of the classifications require a judgment call, but it’s helpful for giving a broad overview. I gave each proposal a Proposal Category and a Proposal Type.

To start, these are the five proposal categories:

Each of these can further be broken down into more specific proposal types.

This is a pretty broad category that includes big things like the Governance 2.0 signal proposal or smaller items such as partnership engagements or even temperature checks. These do not directly execute anything but they do act as a direct signal from DXdao. Signal proposals are typically on the forum for a few days and can be submitted on xDai and mainnet.

In the future, this might include DXdao’s governance delegation process.

Treasury proposals involve a range of actions revolving around the treasury. This includes:

SWPR and DXD farming rewards could also fall under the Treasury category, but they are more of an expense.

In the future, this might include controlling DXdao’s Radicle repo or other on-chain infrastructure.

Looking at the data

Thanks to the help of the Gov_dev team (export everything), I pulled the proposals from xDai, mainnet and Arbitrum since DXdao’s inception to get a better idea of our proposal makeup. 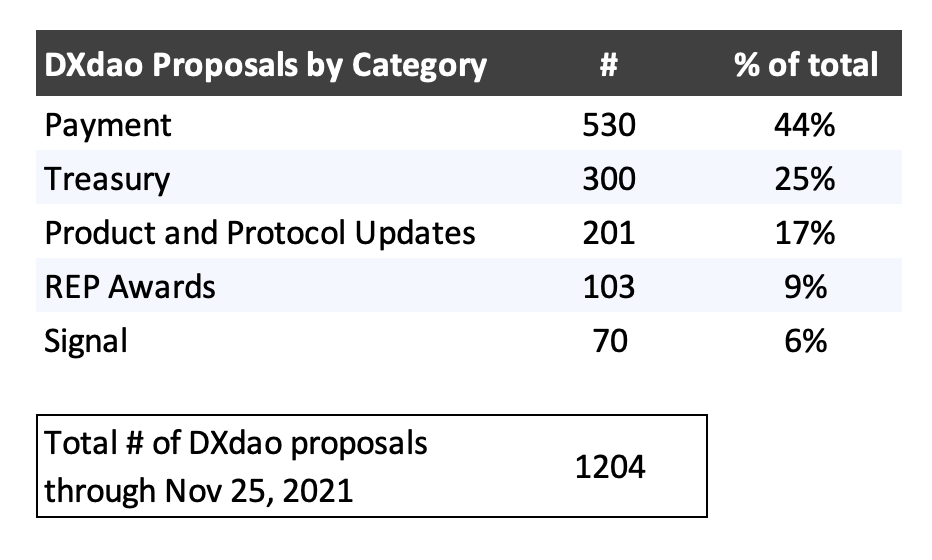 The Payment proposal category is the largest by far. This includes regular contributor proposals and payments to contractors as well as Swapr Farming Proposals. 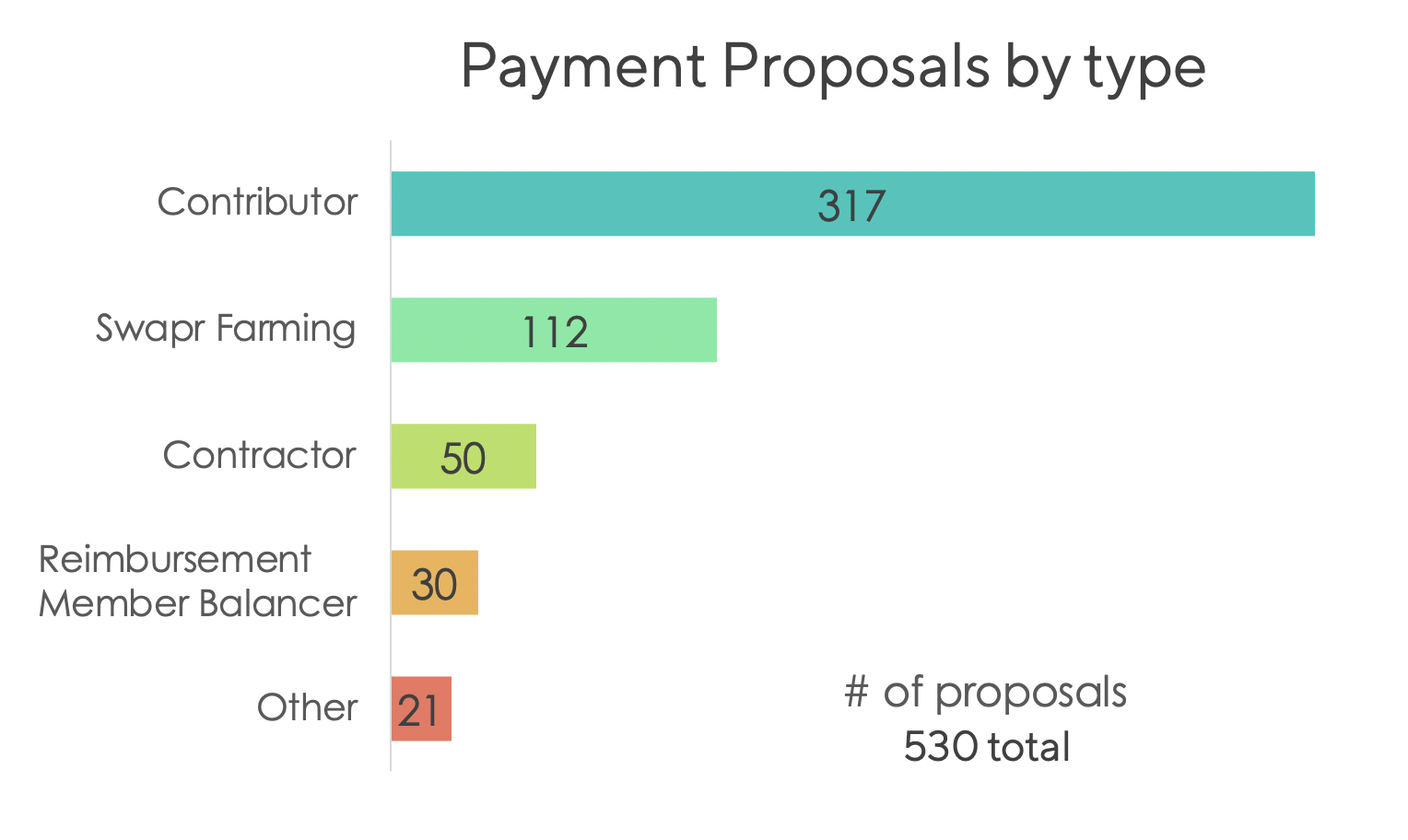 And then looking at the Product and Protocol Update category. These are mostly ENS proposals. Most of the Token List proposals were in the early days of DXdao and dealt with DutchX auction tokens. 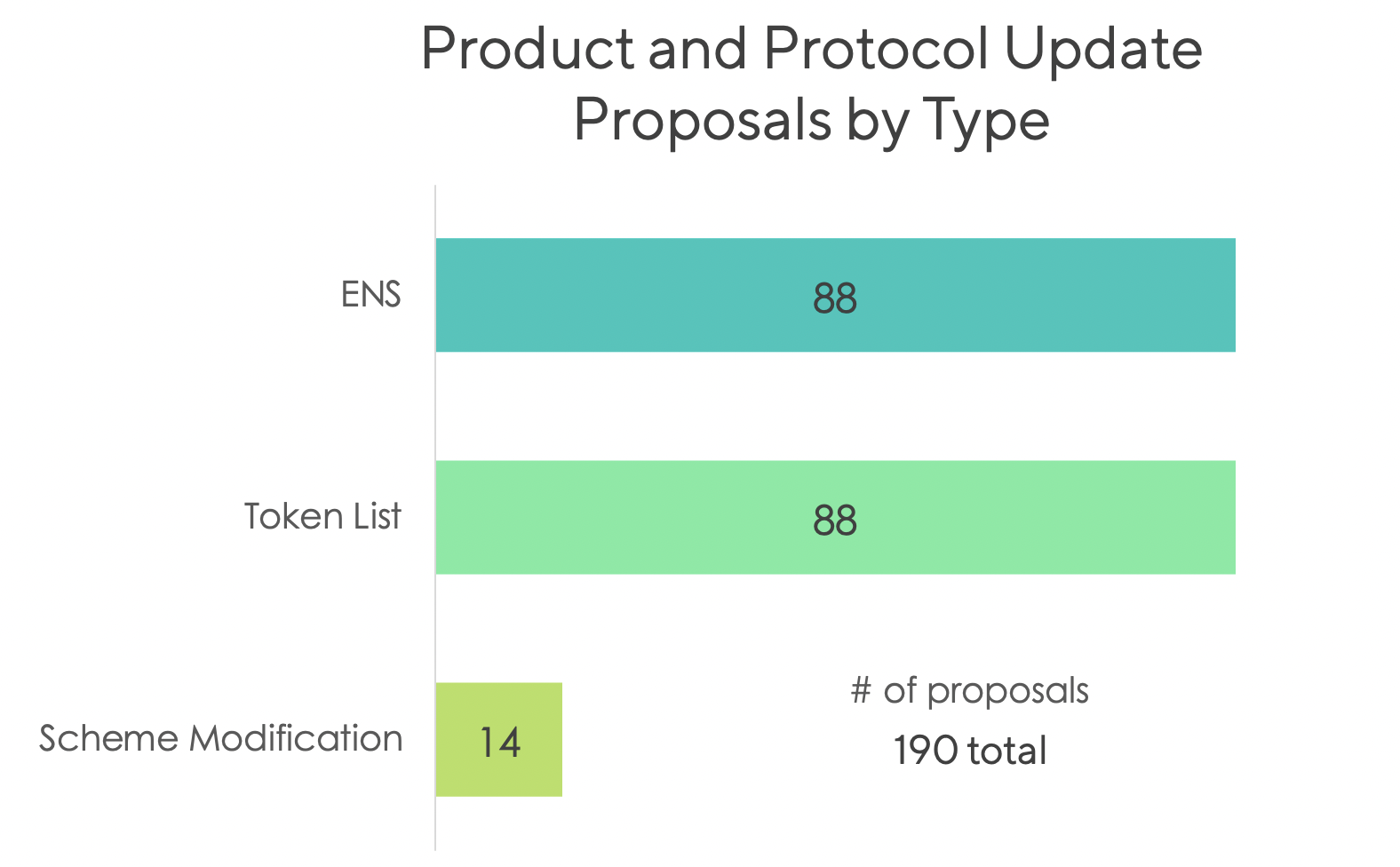 Treasury proposals have grown a lot in 2021, obviously in line with the growth of the treasury. The Buyback proposals are by far the most common, but there are still other Treasury proposals that are done on a consistent basis. This may increase in the future and perhaps another category: yield optimization. 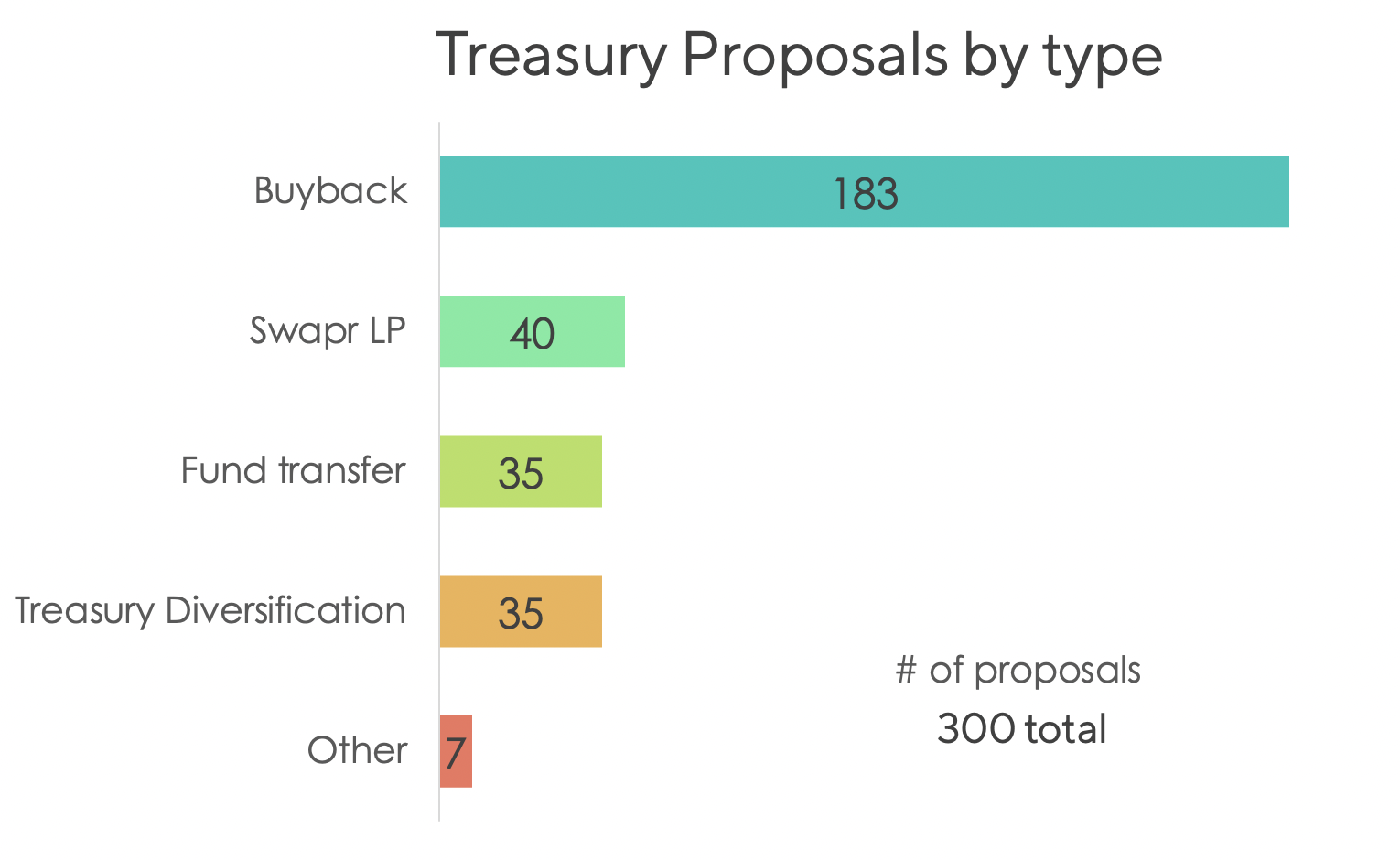 I didn’t look at signal proposal category breakdown because there was only one type in that category. Perhaps we can get more granular in the future. I did look at REP proposals. REP boosts were the most common, but lots of REP syncs, which will likely grow in the future as DXdao lives across chains. The Contributor REP awards were for when some early contributions were only paid in REP and no stable/ETH/DXD compensation. There have been 3 REP slashes. One self-slash from Loopring, a compromised wallet, and then a REB burn, transfer from Augusto (perhaps that should be another category?). 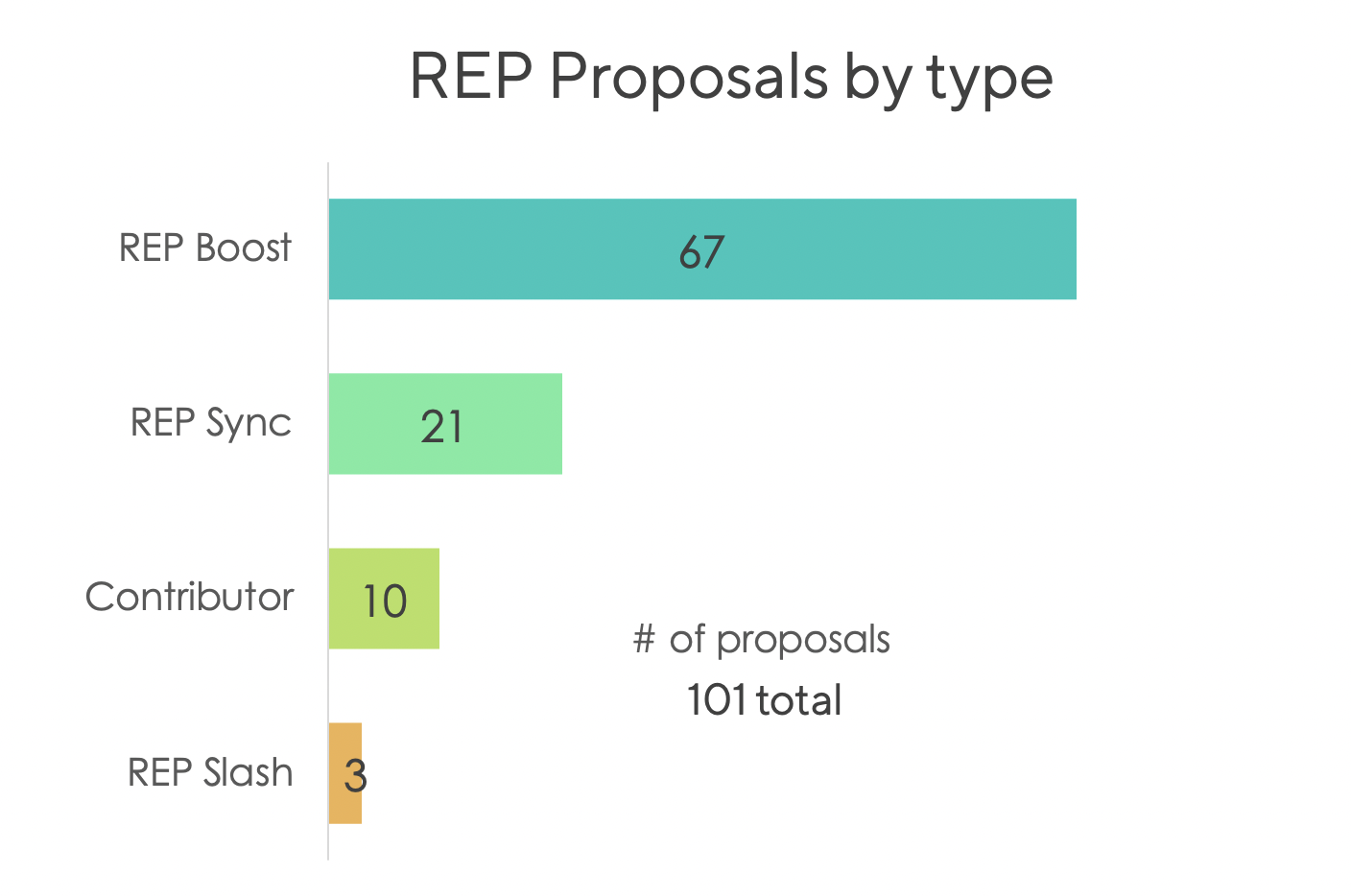 Looking at activity by base

And then lastly, to look at proposal activity at the base level, I looked at the top Proposal Types that went through mainnet and xDai base (Arbitrum is all Swapr farming proposals, so i will spare you the chart). Mainnet (598) and xDai (525) have processed almost the same number of proposals but their top Proposal Types show how the bases have been used. 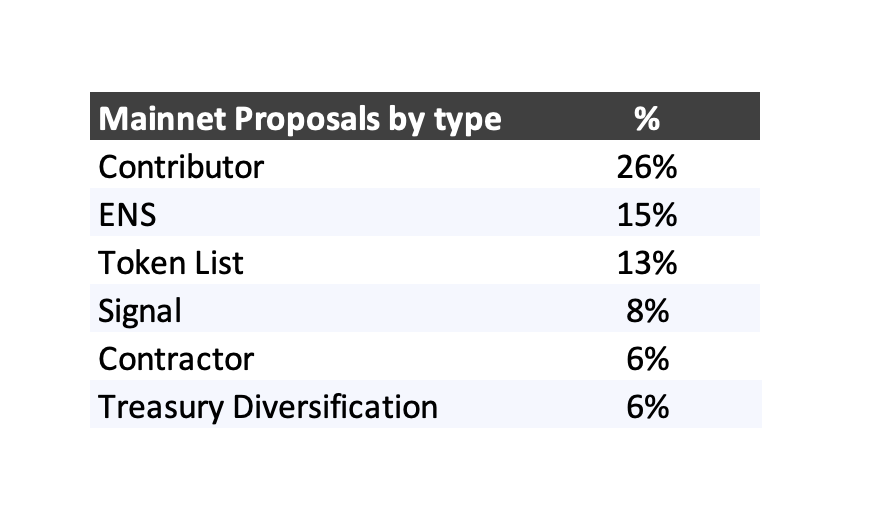 Note this is only the top 6 Proposal Types on xDai and Mainnet. Top 6 are 74% of proposals on xDai vs 84% on mainnet, reflecting the greater diversity of proposal types on xDai. I imagine that ENS and Treasury Diversification proposals will be the most common on mainnet in the future. 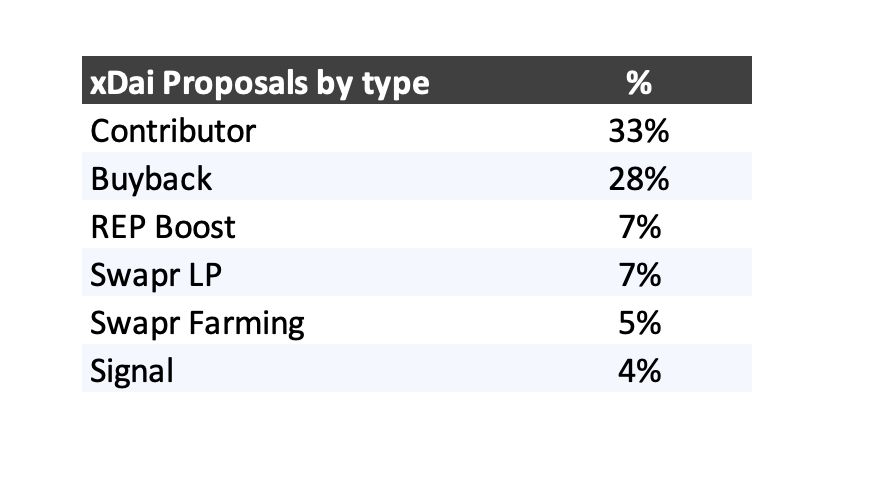 Check out the full data to play around. I’ll be chatting about this on Wednesday governance discussion for a little bit if you have any questions or feedback (or objections to the categorization), it would be great to have them.

This is great! And I imagine will help DXgov be useful not only for DXdao but for DAOs in general.

One comment I have is that I agree REP transfers should be labeled differently from REP slashes, the former being something more of an accounting action and the latter representing an actual change in voting power in the current governance model and in Gov 2.0 an actual reduction in the address’s reputation, which results in a corresponding reduction in voting power.

REB burn, transfer from Augusto (perhaps that should be another category?).

This will be great for prioritising the development of proposal type development and UIs for DXvote, thanks Chris!
Also just very interesting to read