At the last DXD Token WG meeting, we went over the draft token model (slides here) and then also some of the governance processes that would be needed to implement it.

At the next meeting, I will have a draft proposal for review. This would be a big change for DXdao, and it’s important that the proposal be up in the forum for long enough so everyone in the community has the time to comment/review, reject or maybe propose something different?

In addition to last week’s meeting, the midway checkin also has some helpful info.

Tldr: The DXD Token WG proposes a new token model, where “DXD gets its value from DXdao’s treasury, which grows from product revenue and its investments into decentralized technologies.”

The DXD Bonding Curve was launched in May of 2020 by DXdao. The bonding curve was an effective fundraising tool but the mint/burn functions of the contract were never able to create a liquid market for DXD. In May 2021, DXdao launched the DXD Buyback program which purchased DXD off the open market using ETH from the general treasury as well as from the buyback reserve. The program bought over 15,000 DXD (30% of circulating supply), but it was never viewed as a sustainable long-term model for DXD value accrual.

Since the bonding curve launched, DXdao has launched and managed several DeFi and governance products, diversified its treasury into $10m+ of stablecoins, and has a team of 20+ full-time contributors focused on building and growing the DXdao ecosystem. The DXD token is at the center of this ecosystem, but there has not been a formal link between the value that DXdao creates and the DXD token. This creates uncertainty for DXD holders, especially as DXD has traded at a significant discount to book value.

The proposal commits DXdao to:

To further simplify and answer the question, “Why is DXD valuable?”, the WG affirms: DXD gets its value from DXdao’s treasury, which grows from product revenue and its investments into decentralized technologies.

DXD Monetary Policy Committee
Management of these tools requires close tracking of the DXD market as well as DXdao’s treasury. The committee should be at least three individuals and also include full-time contributors. This work should be compensated in vested DXD. The committee is tasked with:

Product development funding
DXdao’s mission is to enable community freedom. It was launched in 2019 as a radical experiment in decentralization. The DXD fundraiser was intended to raise funds for product development in line with this vision. The new token model represents a new social contract between REP & DXD holders. The DXD Token WG affirms DXdao’s commitment to building and funding decentralized products that enable community freedom by committing at least 7.5% of DXdao’s treasury ($2.3m) to fund DXdao’s product & operations for a year.

This % can be changed at any time by governance and represents an overall budget suggestion for DXdao. This incentivizes contributors and the community to grow the size of the treasury through increased revenue or successful investments.

This signal proposal is the output of the DXD Token Working Group, and if passed by REP & DXD holders, should be implemented by DXdao. Some of the elements will require significant development work before they can be put into practice. In the DXD Monetary Policy Framework, the DXD Floor Price Guarantee and the protocol-owned liquidity can be implemented using DXdao’s existing governance tools.

This proposal commits to implement:

Thank you for putting together this draft proposal. I am looking forward to our call today.

Unfortunately, I can’t support this proposal in this format as it fails to fulfill what has been discussed during previous working groups and doesn’t create a healthy pattern for DXD.

First off, the DXD Monetary Policy Committee doesn’t require a party composed of multiple individuals and full-time contributors. The task of providing quarterly reports, compiling data, issuing monthly recommendations, and working on managing redemptions can be managed by one part-time individual. In order to concentrate knowledge and optimize productivity, this task should be handled by one individual that will submit data-driven decisions to governance.

Product development funding - currently, DXdao is in a stage where there is close to no product-market fit, judging by revenues and volume on the suite of products. Right now, DXdao would compare to an over-funded seed stage startup that hasn’t achieved product-market fit but is staffing without a clear goal and vision towards achieving profitability. Spending ~$2.3M per year without having demonstrated a capacity to ignite growth isn’t financially viable, especially in a bear market where every unnecessary cost should be cut.

Therefore, I would suggest a commitment of 5% of DXdao’s treasury ($1.5M) for 18 months, in order to support the development of key features that will contribute to significant growth and help DXdao products achieve product-market fit.

Implementation of the monetary policy framework - during all the conversations and working group sessions, the floor price guarantee discussed has been 70%. Enough effort has been put to settle on this number, moving away from it sounds like a malicious attempt to fragilize the objective of the proposal.
On average, banks that trade at <x0.7 of P/BV (price to book value) are considered struggling in efficiency and holding bad assets. Sorry for the comparison, but I think we should hold DXdao to a higher standard than toxic and opaque banks.
Supporting an x0.7 of treasury NAV should be a starting point for the price floor, and lead to an increased price floor over the course of the next 18 months when the treasury contributes to the development of multiple products.

Liquidity - $500k in DXD/ETH at 70% of NAV would help create a liquid market (still low as this would represent 3.4% of the market cap) and enable DXdao to capture fees.

Inverse bonds - I think this requires more discussions and fine-tuning, a strict and low budget would result in only bots benefiting from this opportunity and undermine the efforts.

Looks like the meetings we had were a complete waste of time. All of these numbers in your proposal are far worse than anything that was discussed. 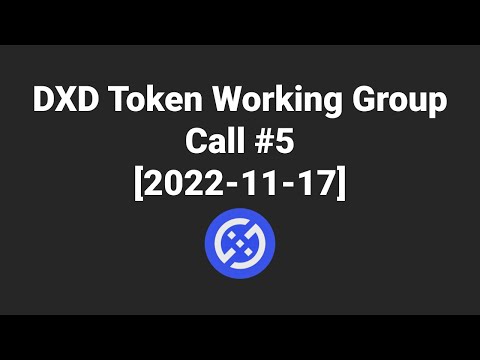 Check out the video of the discussion today. I’ve incorporated the feedback into a new draft which you can find here.

@Molotov thanks for your comments. I’ve incorporated them in the updated draft. the one point I don’t get is this one on inverse bonds being eaten up by bots. Given that they would be over an extended period of time, it couldn’t be a speed game? The inverse bonds are meant to avoid the type of redemption-arbitrage loops.