Following questions from @ykplayer8, it has been suggested that more precise guidelines surrounding the use of a DXD Redemption Balancer (adaptation of a Member Balancer) are defined under the recently passed DXD Token Model, which commits to a 70% NAV floor price guarantee.

This proposal has been suggested to run alongside the pending DXD Redemption Balancer Proposal, such that it’s possible to gauge the voting action on each concurrently and not require the delay/impediment of the current pending proposal.

Thoughts & comments welcome before putting up a signal proposal tomorrow to give adequate time for things to run concurrently.

Specifically, DXD holders would be able to redeem their tokens with a 70% NAV floor price guarantee, and REP holders would have the ability to easily verify the circulating supply, NAV, and prices of the Redemption Balancer proposal. 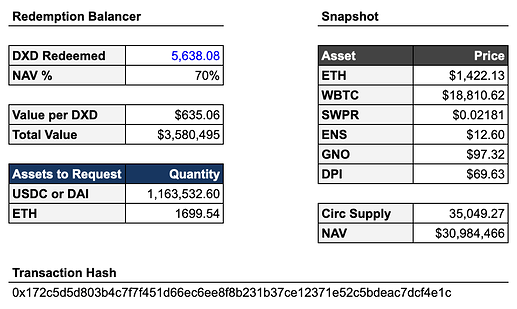 Alchemy - A decentralized application for budgeting, collaboration, and DAO management, powered by 3AC