Timeframe : 11/03/2022 - 11/05/2022 Reflections can be found here Scope of work to be completed: Implementation of Guilds Frontend UI/UX improvements and bug fixing on DxVote Smart contract work on dxdao-contracts Compensation: I would like to uplevel from level 3 to level 4 Experience Level: 4 Time commitment: Full-time $12,000 DAI: For 2 months of work at level 4, to be sent half on the first payment proposal and half on the second payment proposal $8000 DXD: Vested for 3 years 0.…

The following post is a recap and payout for the second half of the above proposal.

In evaluating my work I would not place too much emphasis on the commits placed as it’s quite disappointing that rather than merge my PR that @dinocres would rather copy and paste with no attribution, whatsoever, compare these PRs:

It would have been easier to have simply merged and then made the changes needed.

and in this one, he actually did build on top of it:

What I did well:
Continued development on Guilds.
Implemented auditors’ recommendations on the new governance contracts.
improvements on smart contract workflow and review.
Still managing to contribute despite having multiple requests for changing meeting time slots or requests for recordings ignored by @ross and having to rely on poor documentation to know what’s going on.

What I could have improved upon:
I should have cut my losses off much earlier

I took 3 days off during this period for religious celebrations as is afforded according to contributor guidelines as a holiday.

I will be following up on this proposal with one for claiming costs on entity formation soon.

Slanderous comments around contributors to the DXgov team is a crude way of covering up both work that does not match your level (increased with no communication) and a lack of communication skills that cannot work in DXdao or any organisation. Weeks with no attendance in calls, slow progress on work and then defensiveness when help is offered followed by an accusatory proposal 7 months later is not something I will support.

I would suggest lowering the level and time commitment to be paid anything for this period without DXD or REP.

Weeks with no attendance in calls, slow progress on work and then defensiveness when help is offered followed by an accusatory proposal 7 months later is not something I will support.

Me neither, you basically quit DXdao by disappearing and now asking for payments 7 months after. @levotiate I will only vote in favor of 2100 USD (which is 50% of what you are requesting) with no vested DXD and REP in this proposal.

I have every right to bring up additional information relating to the issue of discounting work completed, especially when closed PRs give off the impression that work was not completed up to a suitable quality. When that same work from those closed PRs is then attributed to another person then I do not think anyone would stay quiet about that.

If there was even a single mention in the repo I would not have brought it up.

A simple non-dev example would be discounting work in a draft of an article created but seeing entire sections of it copied word for word in an article that’s been posted later on.

that does not match your level (increased with no communication)

I created a proposal highlighting my previous level and the level at which I wanted to be compensated at, you read the post and liked it. I then created a proposal on DXvote which was then discussed during the governance call and then voted on by the rest of the DAO. Dxdao’s proposal process is lengthy and extensive and allows an opportunity for any member to comment on each stage. 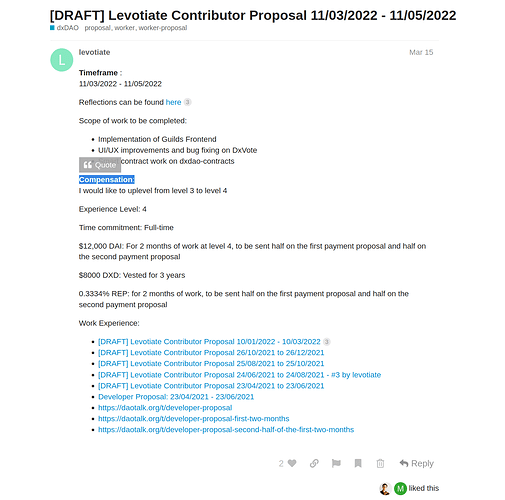 and a lack of communication skills that cannot work in DXdao or any organisation.

I simply asked for either better documentation or for recorded calls thereby switching from a synchronous to an asynchronous style of communication which the DAO is already supposed to be working at. If you refuse either option there is nothing much that I can do and if Dxdao is supposed to be a leader in web3 governance then it should not be operating at the level of asynchronicity less than that of big tech.

slow progress on work, and then defensiveness when help is offered,

You haven’t actually assessed the work and broken down why you think it’s not worthy of compensation at the level or time specified. You have only given mere opinion and what help are you talking about exactly?

an accusatory proposal 7 months later is not something I will support.

Again this is not something that I can stay silent upon and a lot of contributors regularly struggle to submit proposals on time due to the amount of time and work needed. The fact that I have only found time now should not be counted against me.

without DXD or REP.

Are DXD and REP actual compensation for contributing at DXdao or not?

I will only vote in favor of 2100 USD (which is 50% of what you are requesting) with no vested DXD and REP in this proposal.

Again does DXdao believe in fair work for a fair wage or does it believe in arbitrary slashing whenever it can get away with it?

Again does DXdao believe in fair work for a fair wage or does it believe in arbitrary slashing whenever it can get away with it?

I believe in fair work and a fair wage, that’s why I expressed the compensation amount that I will support on chain. In my opinion, that is what you deserve for the work you did and the commitment you showed and your lack of communication is your last contributor period.

Now you can just go ahead and submit a proposal based on the feedback you received on this topic, that’s how it works.

Although not against any rules the level change was done without any discussion with anyone. Again, not against rules but not a good look when at the same time there are questions around the level of your work from members of the team.

You asked and you received, better attempts at documentation were made especially around larger discussions. But recording or documenting calls every day is not realistic, efficient or how a good team is built. The fact of the matter remains that despite solid documentation around refactoring efforts at the time, you still had no idea what was going on. Being asynchronous is not an excuse for not being a unit of the team.

I will not be breaking down your work or publicly airing issues on the forum. We went through all of this 7 months ago and it was enough of a time sink there, I will not let it become one here when everyone is so busy.
You are more than welcome to try to pass a proposal I am just telling you that I will not be supporting it.

I think I should chime in to give some context.

I worked on two unfinished PRs. The fact that I added code proves that those still needed work to be ready to be merged.

I’ll be addressing each PR separately:

The first commit message is “added files from PR”. I don’t recall why I decided to do it that way instead of continuing from the previous PR. I didn’t do this to attribute code that wasn’t mine but to finish the task; at that time, I didn’t think much of it.

I’m sorry it might come off as if I

would rather copy and paste with no attribution, whatsoever

as that was not the intention. However, if you think it’s OK (I think it is), I’m going to reference the original closed PR in the comments to make it explicit.

I continued this PR from what you built. You can see all your code attributed on everything you did in the PR history.

I think the confusion stems from the fact that the original issue was closed. At that time, we changed from the “dxvote” repo to the new “DAVI” repo, so every open PR was closed and opened again in the new repo. That was the case for other PRs (like 901, 900, 895). So other members of the squad also had their PRs closed.

I won’t comment on the contribution compensation as I wasn’t a contributor to DXdao then and don’t have a first-hand opinion.