Possible solutions to financially incentivize REP holders are discussed, including: (1) offer a one-time DXD deposit to REP holders that vote during a defined voting period; (2) use a jury / Kleros system where interested REP holders are given DXD to make informed decisions on important governance proposals; (3) create a profit sharing mechanism that distributes a portion of DXdao profits to those who vote during a certain period.

To check on how we’re doing with DXdao REP holder engagement in voting, we reviewed a sample of DXdao proposal votes from October 15 to November 18, 2020. The review showed that REP holder participation in DXdao governance is less than stellar.

On average, onchain voting attracts 3 votes per proposal, with proposals most commonly receiving just 1 or 3 votes to pass. To be clear, most proposals passed with 1 to 3 votes and no votes against. 5 of these proposals were passed with one sole vote by the same person that made the proposal. That is: person A makes proposal, person A votes for proposal, no one else votes, and proposal passes. DXdao currently lists 444 unique REP holder addresses. REP holders are therefore extremely under engaged in voting. 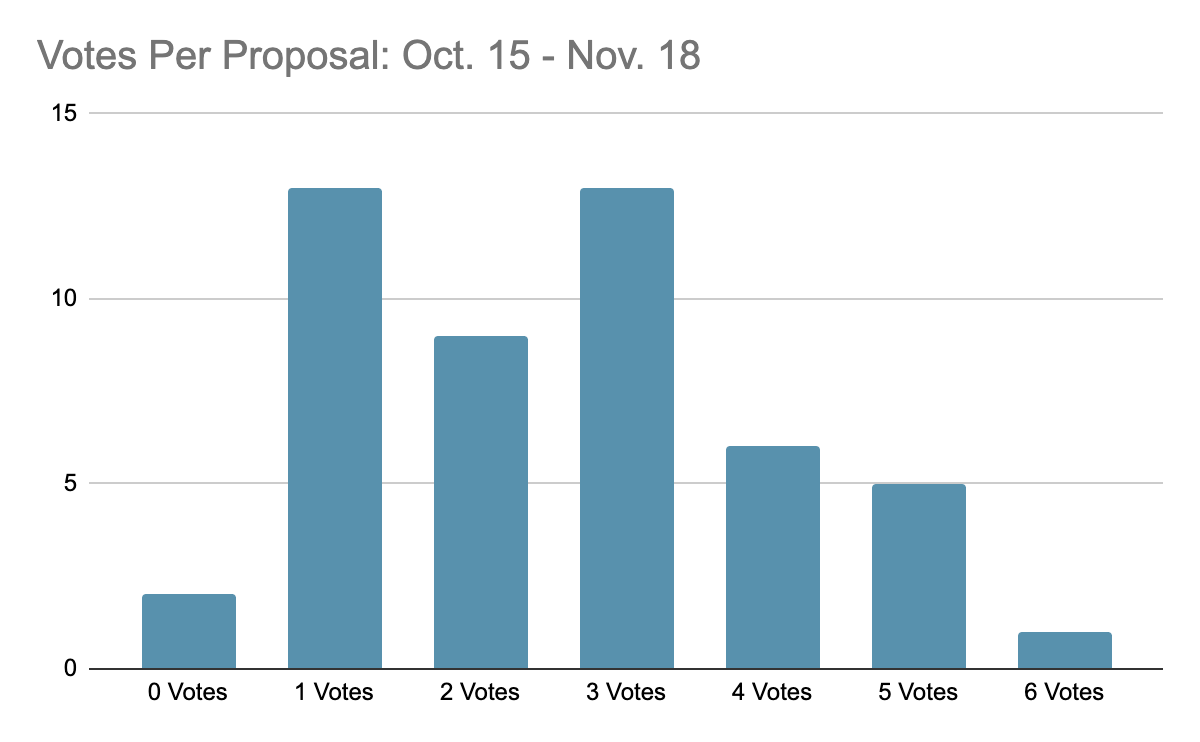 Also, note that DXdao ranks No. 2 in the number of voter proposals compared to other DAOs. DXdao is therefore committed to transparent governance, but it just needs more of its members to participate.

Based on this data, workers that voted had 2.25 times the voting power as non-worker REP holders that voted, and they voted 5.67 times more often than non-workers. In sum, paid workers have high voter participation rates and high control over governance decisions. REP holders that do not work for DXdao are far less likely to vote on proposals, and when they do vote, it is at much lower rates with less voting power than workers. 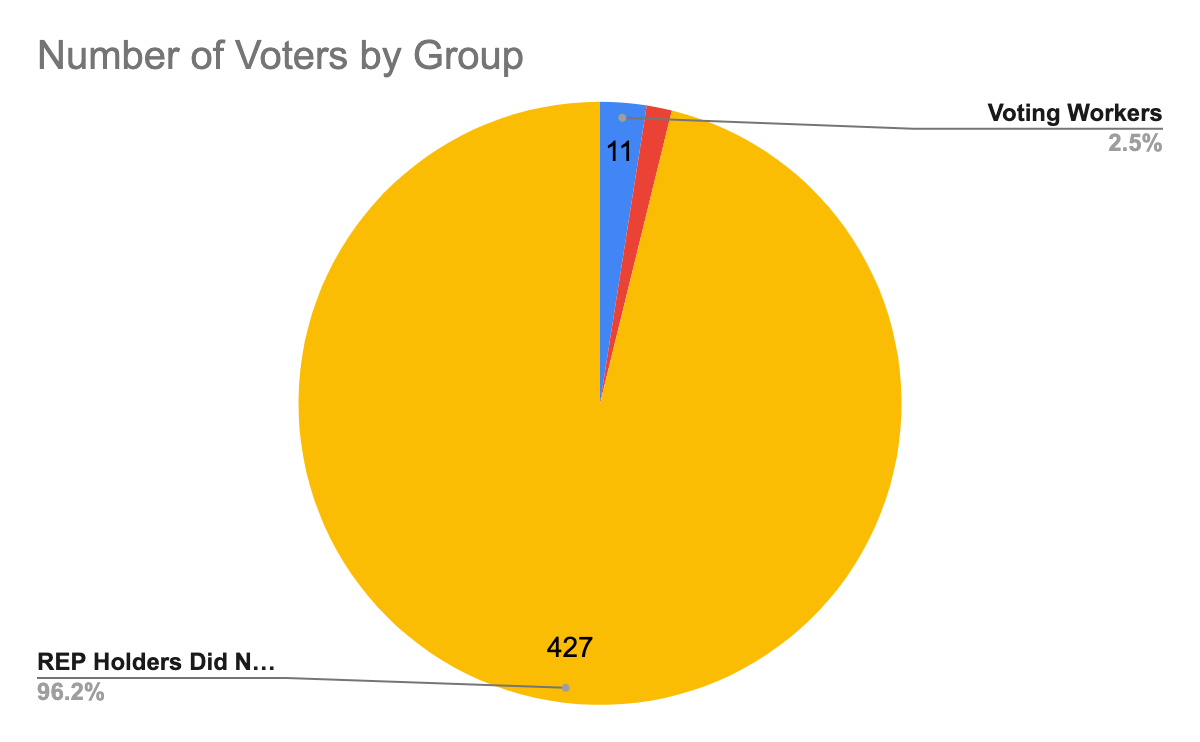 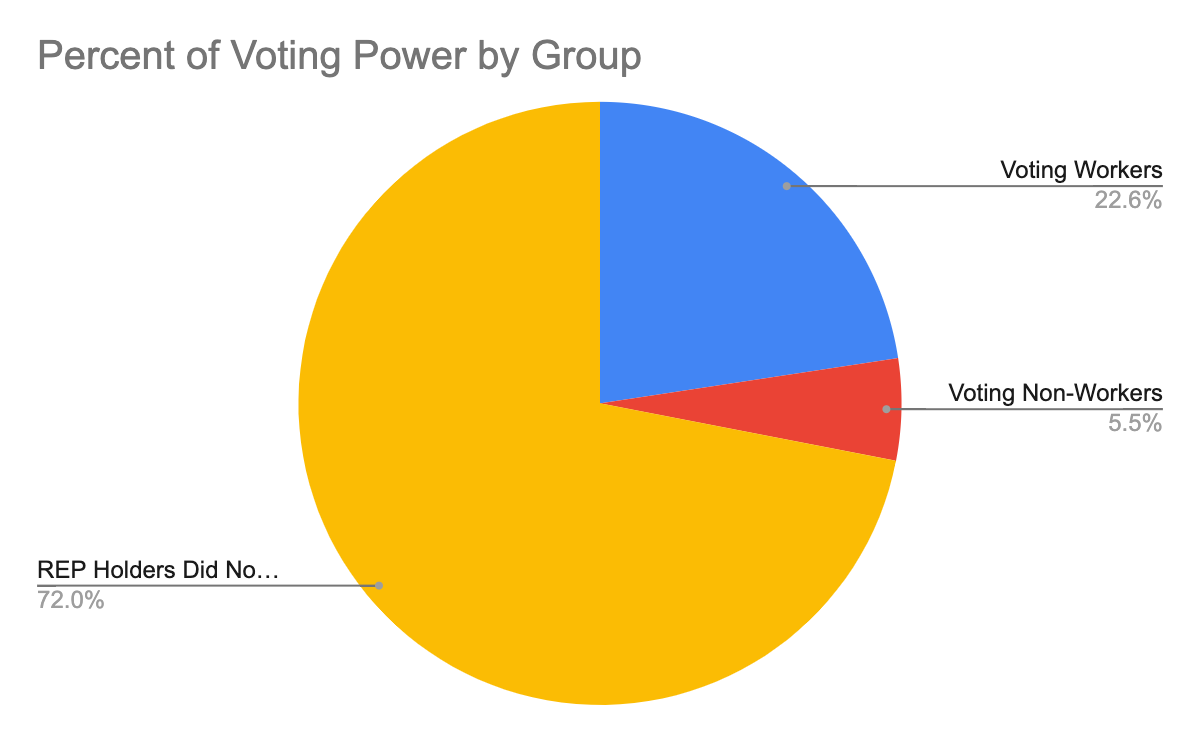 It’s rational that paid workers have a financial incentive to vote on proposals that relate to their job. However, REP holders are not voting because they do not have a financial incentive to participate. The few REP holders that do vote (and do not hold DXD) likely vote as a hobby (why they rarely vote) or because they have related business interests with DXdao, e.g., DAOstack and Gnosis employees and/or executives. This lack of incentive led 96.2% of REP holders to not vote during the sample period.

Further, most REP holders do not hold enough REP to make a difference in voting. (@dmaddock1). Awarding REP based on merit and contribution to DXdao is an important value. However, the current REP reward structure has created a major distribution problem. Currently, for every month of work, a worker receives 0.1667% REP without any clear finding that the work was completed and of good quality. This has led to over 60% of REP holders having under 0.02% REP, versus voting workers with a median of 1.35% REP during the sample period. Since most REP has been given in large volumes to workers on a monthly basis, a governance system that was intended to facilitate the spread of power has actually centralized that power into a small group.

As a DAO, all stakeholder interests should be represented through voting for two important reasons. First, when any group has concentrated power, they will vote in their own interests and disregard other key perspectives. “An employee of a company who also owns stock likely considers their ongoing employment much more important to their well-being than their ownership interest in the company.” (Creating a Stakeholder Democracy Under Existing Corporate Law). Without proper checks and balances, the collective runs the risk of short-termism as workers may vote for lax accountability structures, high salaries and/or bonuses. We should not have to depend on the goodwill of employees to avoid such situations.

Second, DXdao could be seen under US law as operating as a traditional company subject to numerous SEC, CFTC, and Anti-Money Laundering (AML) laws. This, of course, is still possible even if full community participation in DXdao decisions is accomplished, but centralized voting power in employees would not help an argument that DXdao, and its employees, are not subject to these laws.

In order to uphold the promise of a “super-scalable collective,” all important stakeholders need to be identified and properly incentivized to vote. These stakeholders include DXD holders, REP holders other than workers, workers, and DXdao product customers.

Currently, the Governance 2.0 working group is determining how to give DXD holders voting rights. This is an excellent step. DXD holders have made a long-term financial investment into the success of DXdao and have an obvious incentive to participate in governance to increase the value of their DXD. There are also 1868 DXD holders versus the 444 REP holders. Like REP holders, DXD holders must be given enough REP to make their votes matter. The same poor engagement problem will occur with DXD holders, if they do not have enough REP to influence voting decisions.

Ideally, as DXDao products build larger customer bases, these customers should also have a say in how products are improved. Guild voting is an interesting solution that can operate similar to classes of shares in corporations where different shares hold different voting rights and restrictions. @nylon wrote an interesting post outlining the structure of guild governance for DXdao Fractalization.

Some possible solutions to engage current REP and other stakeholders include:

Thanks and totally agree, needs to be reasonably measured against the benefit.

If Xdai is successfully deployed, the subsidy budget can be used here

This is super interesting review of voter participation!
I’m going to just throw some random thoughts here
(unfortunately I’m still not up to date with the governance working group - pardon me)

If DXD drop for voting is implemented, we might use some version of quadratic dropping. The aim is to incentivize smaller REP holders and not enrich workers that already get compensation from DXdao.

Another huge barrier for participation is gas cost and ease of use. If we put effort to enable snapshot-like experience or even make mobile voting easier, that could improve participation significantly.
Those are just my own pain points but maybe as a first step fund some small research about voter pain points?

Another option is to add quadratic REP multiplier for staking DXD. This will be a DXD sink as well as enable smaller REP holders increase their REP impact

Why does a DAO need the votes of those who do not want to vote!
This is the issue, and proofs a structural problem that needs to be solved.

@Randle with using holographic consensus the DXdao does not necessary require everyone voting as once a proposal got successfully boosted, it can pass with just one vote. You can see in the history page of alchemy that there are proposals with very low voting participation which still passed: https://alchemy.daostack.io/dao/0x519b70055af55a007110b4ff99b0ea33071c720a/history/

As a distributed collective who actually cares about true governance, we need to do our best to improve and progress/experiment in governance. This also means to eliminate friction where possible (transaction costs, missing information, rewarding governance and more…)

This is a great idea that others in the community seem to also be interested in. Also agree that signalling would be very interesting to compare some of the more discussed topics on DAOtalk to the level of voter engagement and proposal outcome on chain.

As @corkus explained, there are many decisions that do not need high voter engagement on chain because of clear community consensus on the proposal. We’re most interested in those more debated topics and those topics that have high strategic and / or economic impact on DXdao.