Cleaning Up The Trash (Burying Proposals)

Currently in GenDAO there are a lot of proposals that are significantly downvoted & downstaked. Should the Genesis Protocol support boosting in the opposite direction, “Burying”? 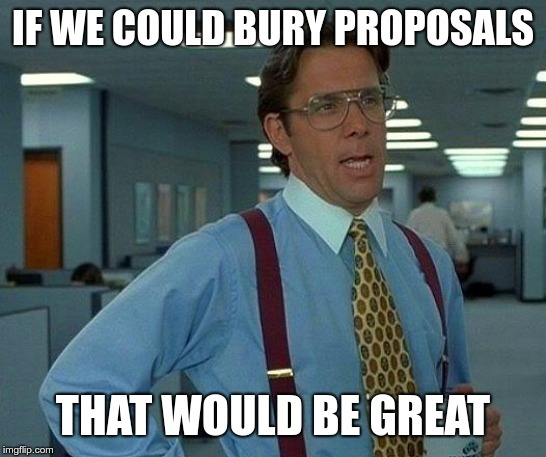 Not sure what this would mean at the protocol level, since requiring a proposal to get 50% of total rep effectively buries it…

But I think this is a great idea for the application layer. Alchemy Earth could “bury” or hide proposals that meet some set of conditions such as:

The interface would also have a button to “show hidden proposals”.

Definitely agree it could be done at the application layer through filtering.

At the protocol level there might be incentive to do this game theoretically. Currently the prediction game has a shorter time-frame on the positive side of the market. Boosted proposals give finality to predictors in a shorter time-frame than down-staked proposals. I hypothesize that if a predictor was looking to maximize their earnings, they would only look to up-stake contentious proposals. Currently if a predictor wanted to down-stake a contentious proposal, they would have to wait the ~30 days for the proposal to “fade away” in order to get their reward.

Thinking more about this though, opening up the other side of this game may bring some negative side effects… really would love an assessment from someone more knowledgeable than I on this topic, @matan @ezra_w?

I want to emphasize this quote:

Not sure what this would mean at the protocol level, since requiring a proposal to get 50% of total rep effectively buries it…

Currently, yes, but I believe this can be mitigated in the future by fractalizing the DAO into multiple entities with a “winner take all” complex alliance structure.

If we have a low N-count of stakeholders in the DAO and their Rep is allocated via a bloc vote it could dramatically increase the likelihood of the regular queue passing proposals.

This model focuses on the DAO as a whole and not its individual agents by implementing a “winner take all” majority and counting DAOb as a single voting bloc. Let’s say DAOa again reserves 20% of its total REP for DAOb. The entire 20% would be allocated based off of a relative majority of participating DAOb voters. If upvotes from DAOb Reputation holders are greater than their downvotes on a DAOa initiative, an upvote worth 20% is applied within DAOa, and vice versa.

Best used in: Complex alliances of low agent count, where always voting as an entire bloc matters; eg. an Alliance DAO sharing Reputation with many member DAOs, where it’s desirable for each member DAO to have a single, relatively equal-strength vote.