This is a first worker proposal for Carl B (Zephyr Valley AB).

Last year I built a Conviction Voting prototype on Ceramic for a hackathon. This led me down the rabbit-hole of DAOs and governance and how it could change the way we traditionally work, collaborate and learn.

After the summer I joined more hackathons to learn about and explore smart contracts and web3. I built a prototype of a decentralized calendar (Kaly) where events and availability are stored on the user storage with Ceramic and people and services could pull this data.

I was then introduced to DXdao by Nylon and joined calls to learn more. I discovered the request (EthDenver bounty) of a social layer to DxVote and put together a proof of concept published here: Add Comments to Proposal by carlbarrdahl · Pull Request #671 · DXgovernance/dxvote · GitHub

I’m also interested in offline communities, sustainability and the intersections of art, technology and community.

Välkommen. Looking forward working with you!

I set out to explore new ways of working and DX DAO provided me with this opportunity. I’ve had such an amazing time getting to know and work alongside @ross, @vangrim, @madusha, Milan, Geronimo, @AugustoL and Hamza

The meetup in Amsterdam for DevConnect was really cool! Had so many great conversations with Kenny, @Zett, @0xVenky, @sky, @JohnKelleher, @Melanie, @Powers, Nathan, Dave and Milan.

Some of you I wished I had connected more with, Adam and Nylon for example.

What could have been better?

Working with the forum feature has been mixed feelings. Lots of frustration with build systems issues to debug and incompatible versions of different packages.

When moving over the code to DXvote from the initial prototype there was at first issues with Ceramic not supporting webpack 4. Even getting it to work with webpack 5 wasn’t easy because of ESM modules. After posting an issue in ceramics GitHub I learned about a dev branch that solved this.

The next hurdle was MobX not supporting webpack 5 so I had to comment out some code in the config and modal stores to get it running.

Then there were issues with OrbitDBs identity provider which we used to link the keychain from Ceramic to OrbitDB. It didn’t support the latest version of dids used in Ceramic.

We decided to skip this because the registry in OrbiyDB simply maps the Ceramic IDs which points to the actual content and integrity of the post.

So unfortunate that much of the last few weeks was spent troubleshooting these issues rather than building.

I really enjoyed the process of using GitHub discussions to formulate thoughts, getting feedback and generating ideas for the choices of technologies for the forum: 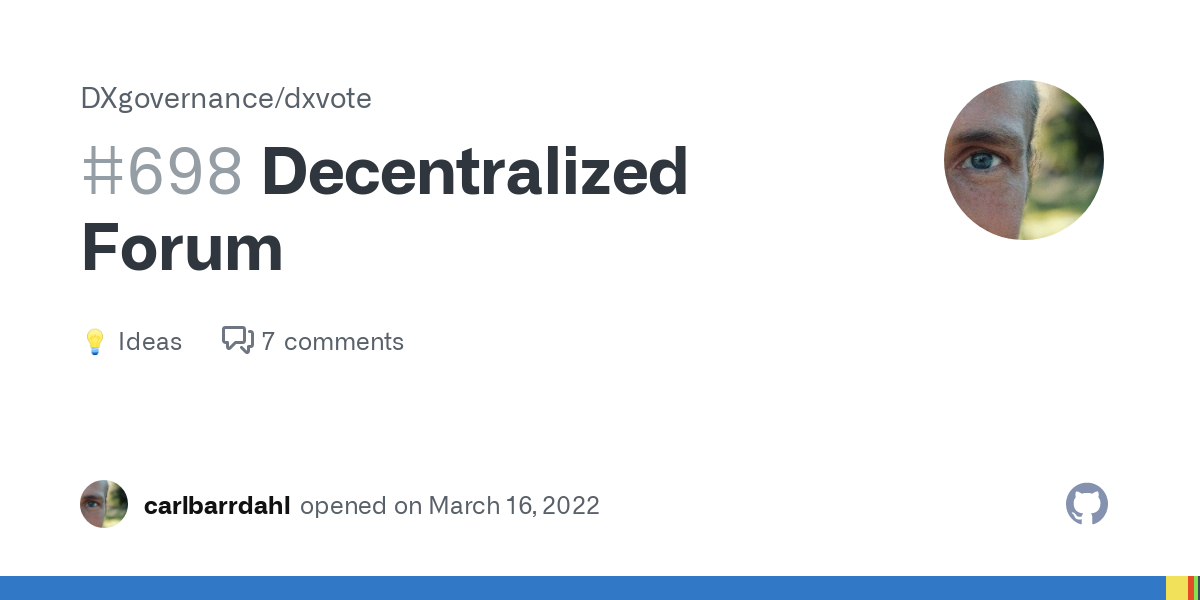 Building the initial prototype was lots of fun and iteration was rapid.

I enjoyed the conversations on ideas for refactoring and wrote a post on it here: 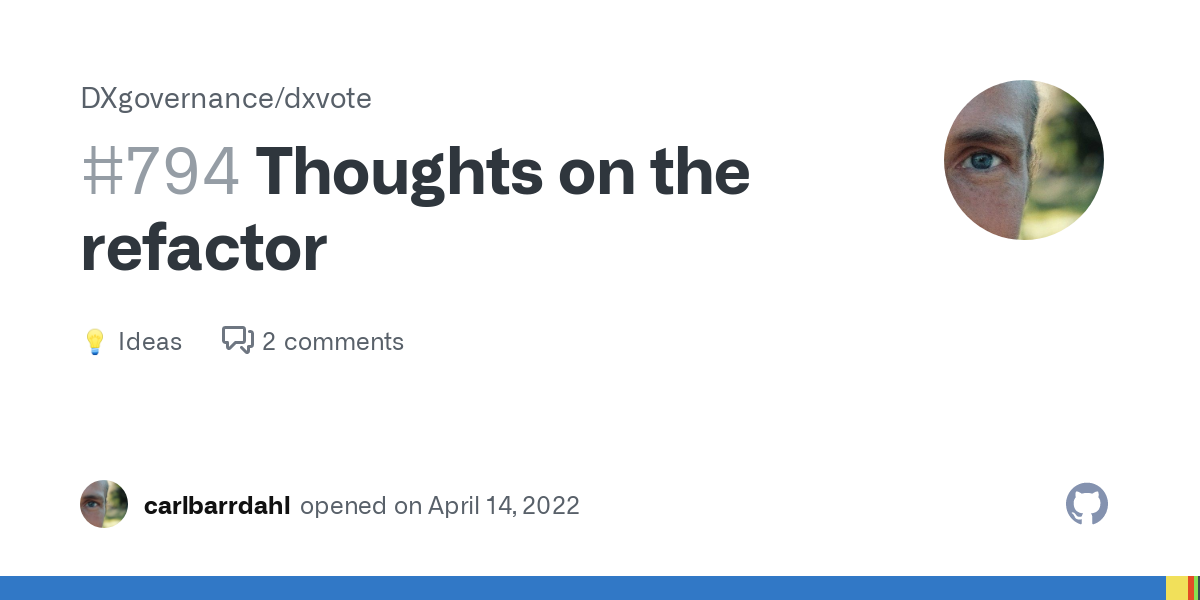 Thoughts on the refactor · Discussion #794 · DXgovernance/dxvote

Hi! I wanted to write down some thoughts on the upcoming refactor and the reasoning behind the recommendations and suggestions I put forth. I'm adamant about these because I've seen many pr...

The refactoring sessions over Jitsi was great.

Eventually got the commenting working in DXvote

Implementing the loading screen for Guilds Landing page went smooth and a good reminder of what contributing to a code base can be like.

This has been a great time for me with so many learnings!

For the next months I am doing volunteering work cooking food and will be taking a break from this work.

I will be checking the keybase from time to time and will be responsive on emails.

I would like to find other ways of contributing to DX in the future. I just don’t know yet what that would look like and I’m open to any ideas, comments, feedback!

It’s been great working with you Carl. You have made some great contributions to the team, of course relating to the work on the forum but also in helping to improve developer practices and I think we are a lot better off from your time here. I hope you enjoy your break and hopefully, someday we will see you back here only hopefully not on this forum but on a more decentralised one.

In this space, it feels like you’ve been part of the squad forever! Really great to also meet up in ETHAmsterdam (it’s always great to have a fellow Swede that just understands that in Sweden, it snows in the middle of April, and there’s nothing weird with that).

Hopefully, we see you soon again to continue to build on decentralized tools. One thing I’d like you back for: is to form the way of working for the squad. As mentioned in your reflection, we have many blockers right now and the contribution experience is not optimal. There are many areas that can be bettered and would love to have your feedback and help to make it a more streamlined process with a low threshold for new contributors.