Can a dao be a bank?

Imagine a dao being a bank. Smell the future. 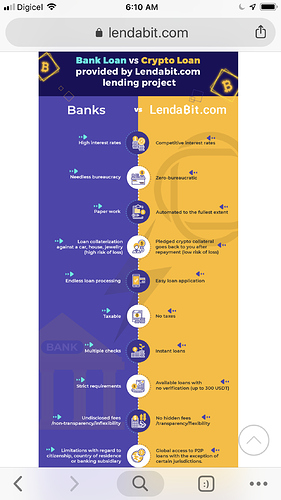 It could be for small 10 USD loans. That capital can save a family. It could empower women to raise capital to start a business.

The number one issue is on the digitalization of collateral. If collateral is digital currency there i no problem. But if it is a physical asset we need oracles to digitize it.

But I se this decentralized banking model use case working.

Definitely agree with @Pat that this can be linked to a bonding curve.

Today I took some snapshots of my bank just to see what the banking model looks like. This is very simple to prototype.

I will work with Atra.io to create a prototype of a banking dapp just to see how this works like a pilot. As Atra is on Ethereum we can later on find a way to bring the backend of that dapp into Daostack.

If I create a Dapp which works on Ethereum is it possible that that dapp can be included in daostack? That that dapp is only accessible by agents who are known in daostack? How do I get the list of walletaddresses of all the agents that are part of daostack mainnet? Which Ethereum contract is managing the list of Daostack agents?

I was under the impression that at least the current version of DAOStack is a framework composed of a set of smart contracts that run on the Ethereum blockchain, an not a blockchain on its own.