Additional Deposit into Swapr on xDai

Swapr xDai currently has $3.4m in liquidity, $2.6m of which is from DXdao. This has been helpful in increasing volume over the last few weeks: 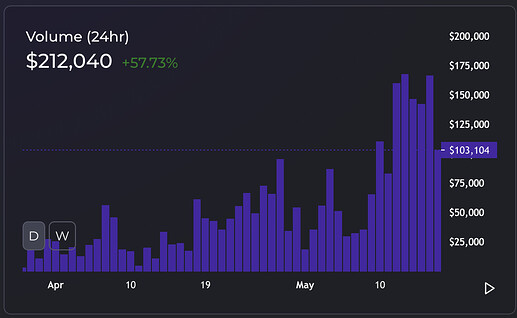 The pool with the most volume is unsurprisingly WETH-xDai, but it also has the largest volume % relative to its liquidity size.

Some of this may be due to the fluctuating price of ETH, but I think Swapr benefits from a large WETH-xDai pool to enable large trades and also make it an attractive pool for arbitragers to plug into.

In terms of the next deposit, I think 400 ETH makes sense. It’s sizable but gives us flexibility for other deposits on mainnet or Arbitrum.

In terms of the asset breakdown, I was thinking:

What do others think?

What should the total deposit size be?

In addition to, or perhaps instead of DPI, could allocate a portion to the larger marketcap DeFi tokens that don’t yet have much trading or many holders on xDai. MKR, COMP, and UNI I think would be a good start.

Stake, HAUS, and AGVE I think are good examples of tokens which are xDai-centric but for which Swapr doesn’t yet have great liquidity. These could also be good options.

Agree that WETH/DAI is a great pair. Another area of expansion, rather than beefing up the WETH/DAI pair, could be to establish large WETH pairs for other stablecoins.

Overall, I would favor an expansion in the number of pairs over an increase in liquidity for pairs where Swapr is already leading on xDai.

I think rather than buying STAKE, HOUS and AGVE for doing LP, we should reach a deal with them to fund the pool 50%-50%.

Look at what xDAI-devs proposed to 1Hive a while ago:

Proposal Information Proposal description and rationale: This proposal is presented in order to add more liquidity into the HNY/STAKE pool on Honeyswap. HNY/STAKE current liquidity 2021-01-17T20:00:00Z (UTC) is ~ 230k USD worth of tokens. It is...

It might be hard to acquire HAUS and AGVE. I don’t think they’re trading on mainnet, so we’d have to acquire them on xDai.

I like MKR, COMP and UNI ideas a lot and the WETH/stablecoin idea.

MKR might be interesting as it is the oldest DeFi token and may be popular with other xDai communities that have an interest in governance (Honey, DAOhaus, etc)

MKR might be interesting as it is the oldest DeFi token and may be popular with other xDai communities that have an interest in governance (Honey, DAOhaus, etc)

My general feeling is that, while we should definitely invest resources to promote SWAPR by several means, we should avoid buying tokens (that we don’t consider as long-term strategic for the treasury) just for the purpose of LP.

My opinion: If we want to promote certain pairs (like UNI/xDAI or AGVE/wETH) we should either