I am submitting a proposal for current ongoing and future contributions to DXdao that started on September 1st, 2022, and will end on October 31, 2022. This proposal extends the role as a contributor for another two months.

These services are administered through DevX and payments are sent to DevX’s wallet (DevX.eth). A separate proposal will request the outstanding REP balance.

Since Nimi’s incubation has passed, this proposal splits my time commitment between Swapr and Nimi at 60% and 40% respectively.

September 1st, to October 31st, 2022, with a full-time capacity of 40 hours/week. Mindful of the above commitment: 60% and 40% between Swapr and Nmi respectively.

Under the new DXdao Pay Structure Update - December 2021 proposal, and based on the newest worker compensation guidelines, I am identifying as a Level 7 Contributor:

You’re quietly bumping your level up without discussion?

Seems a bit strange given Swapr is struggling as a product, contractors were cut, restructuring is being discussed, Swapr is bringing on a new lead dev, and in addition your time is now being split between two projects.

@JohnKelleher We discussed with @adamazad before submitting his proposal, and I agreed with him on increasing his level to level 7, since he is the technical squad lead on SWPR and doing a great job on Nimi.

I should have commented that right after @adamazad submitted his topic.

You don’t think it’s a bit weird to increase someone’s level as they are stepping away from a project, especially when that project is struggling and cutting budget?

This fits on what @adamazad is doing in dxdao IMO, the level of a contributor shouldn’t be affected by the budget of their squad, it should be the other way around, higher level, higher involvement, and that is what Adam is doing, and will do. He is going to take a lot of the tasks left unfinished by spaceinch contractors, and helping organize all the technical efforts on that migration of tasks.

@adamazad can you add that on the contributor proposal?

Yes, besides the fact I think it’s strange for Swapr leads to be giving themselves raises while the project struggles on every dimension, there is also no discussion whatsoever in public about why Adam actually deserves the increase.

there is also no discussion whatsoever in public about why Adam actually deserves the increase.

Then what is this topic for?

If you dont think @adamazad deserves the increase you are welcome to explain your reasoning here.

And when this proposal is posted on chain you can downvote it if you dont agree with it.

I think all increases in level should have some planning and substantiation behind it. And I already pointed out all the reasons why Adam shouldn’t be getting an increase now. The fact that he is decreasing his commitment to Swapr is the most obvious and significant one.

Then what is this topic for?

I don’t see Adam even pointing out that he’s getting a level bumped. I also was the first person to say something. So where is the accountability that you seem to assume comes with this post?

We’ve seen issues with communicating level increases in the past. The most important thing for the governance process is that these increases are highlighted – the community is voting on a budget-impacting change and should be both aware that it is happening and have the tools needed to make an educated decision.

I appreciate @AugustoL stepping in with additional context, I do however mirror similar concerns that @JohnKelleher brought up. I think the lack of clarity surrounding Nimi and the current difficult discussions surrounding the future of Swapr make this an interesting time to adjust levels, especially without strong context in the proposal. I’d like to see more context inside the proposal itself, and maybe a more public discussion?

Edit: To be clear, as some have reached out to me; I’m not implicating that Adam does not deserve to move up a level, I strongly suspect he does, actually. It is, however, a process we need to overcommunicate rather than under. Until/if squad-based budgets and accountability systems are in place, governance needs to be aware of why a level has been adjusted. All I was implying is that this info should be in the proposal, and maybe public discussions would be beneficial. Governance makes the decision, not any individual.

Happy to go revert back to L6.

Do you have the same responsibilities as other lvl 6 devs here at DXdao? If a totally new person came to dxdao with your experience and took the same responsibilities as you, would that person be a level 6 or 7?
Looking through the levels and the guidelines, it’s clear to me you should aim to climb to level 7.
Nowhere in the guidelines does it state that the level system is product performance based or time based.
We are crying that we need more senior devs while we reject one of our own. 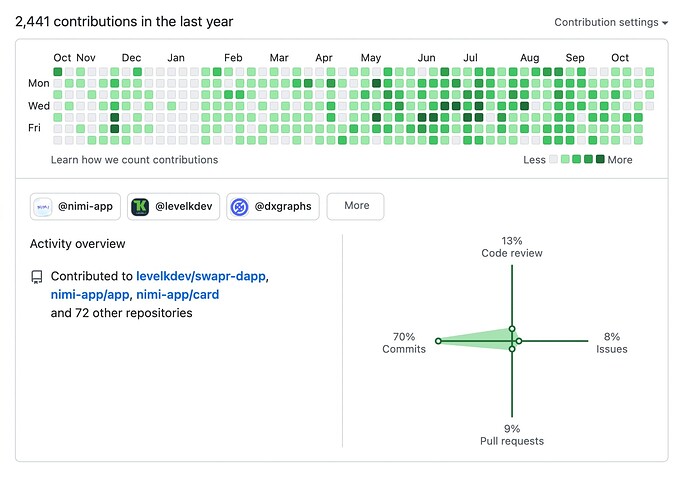 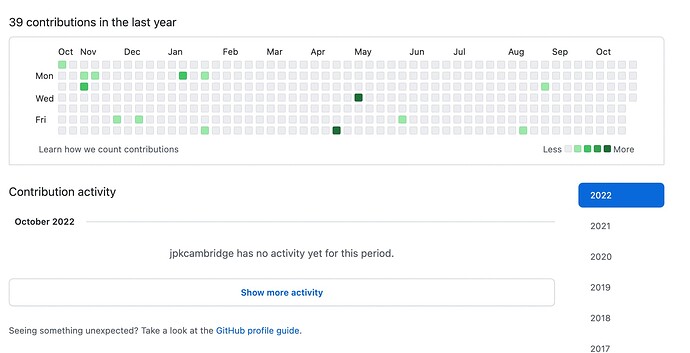 The two darkest spots were on:
1- At ETHAmsterdam Hackathon where you created a GitHub - levelkdev/nimi.
2- You created a bunch of issues on the new Nimi app repo: GitHub - nimi-app/app: Nimi main App repo. Manage your Nimi's!

PS, You couldn’t even set up a proper IDE at the hackathon. You are still using Sublime Text 3.

What other contributions have you done to the DAO?

Also, you should transfer any repo from LevelK to ImpeccableHQ.

To be the devils advocate. This is whataboutism and shouldn’t be much relevant to your contributor level.
Either way this is very interesting data for a past level 8 dev at dxdao. You don’t need to bring one down to bring yourself up.

I think given Adams knowledge and contribution on every aspect of Swapr including smart contracts, subgraph, front-end and sdk level bump should have been done sooner. From my experience and I think everyone who worked on Swapr can confirm that Adam is really go to person about technical aspects of Swapr. I def support the lvl increase!

Hey, I strongly support Level 7 for Adam. He has been the architect of Swapr.

What will happen if a person is contributing to 2 different squads within DXDao. Would we just shut down levelling up because he / she doesnt give full attention to one squad? I dont know how long this Swapr – Nimi discussions will go on. I am running the calls, detailing the scope, reviewing the changes, planning the quarters and Adam and Zett has been pretty transparent with the amount of time they are contributing and all it takes for us to figure out what is needed to be done within the 24 hours (60%). I dont see a problem at all right now and I would want others that talk about this give a clear statement and be open what is the actual problem with the time share between Swapr and Nimi. I just hope all these discussions dont drive them away. Cause 0% of Adam or Zett is far far worse for DXDao, not just Swapr.

Yes, besides the fact I think it’s strange for Swapr leads to be giving themselves raises while the project struggles on every dimension,

Hey John, I respect you for the knowledge you have. Maybe you should introspect a bit about the initiatives that you had led when you were contributing to DXDao. Maybe Swapr is struggling in every dimension because the Level 8s didnt get involved in any dimension with any new initiatives.

This reply is wholly unprofessional. @Melanie I am not sure if you and the Contributor Experience Squad are caught up on this thread, but I would hope you can take some action here. Not only is this kind of baseless personal attack offensive, it also sets the tone that worker proposals can’t be questioned and limits constructive debate in the forum, especially when these kinds of attacks are supported by leaders like @Zett and @0xVenky.

Aside from that, my original points about the lack of process/discussion around the level increase, and the optics of doing level increases at all while budget/restructuring is being discussed, have hardly been addressed at all.

Hey John, I respect you for the knowledge you have. Maybe you should introspect a bit about the initiatives that you had led when you were contributing to DXDao. Maybe Swapr is struggling in every dimension because the Level 8s didnt get involved in any dimension with any new initiatives.

I think that spending on Swapr should be decreased until a more robust plan and better technical leadership can be put into place, in particular a solid smart contract development lead. You describe Adam as an architect, but he has acted more as a front-end development lead, and I thought you had said in the Q4 plan that you are bringing on a new front-end lead.

What will happen if a person is contributing to 2 different squads within DXDao. Would we just shut down levelling up because he / she doesnt give full attention to one squad?

My understanding is Nimi is in some form of limited incubation by DXdao but is not a DXdao squad in the sense the other squads are.

Cause 0% of Adam or Zett is far far worse for DXDao, not just Swapr.

Perhaps they have been vague about their plans, but since the goal of Nimi is to raise external funding in the next few months, it would make sense for you as the Swapr project manager to be planning for Zett, Adam, and Milan to be leaving in the event that happens.