A Look Back at the First DXdao/Swapr Carrot Alpha Campaigns

The goal of this post is to analyze the Carrot experiment, look at the numbers and behavior, ask some questions, define some learnings, and take these learnings into consideration for the next series of Carrot campaigns.

To recap, the first Carrot campaign was:

Here, Swapr xDai “xSWPRprice-1221” Carrot tokens pay out the full collateral if the price of SWPR is 0.2 USD or higher and there is no payout when the result is below 0.2 USD. You can find the campaign on Carrot here. 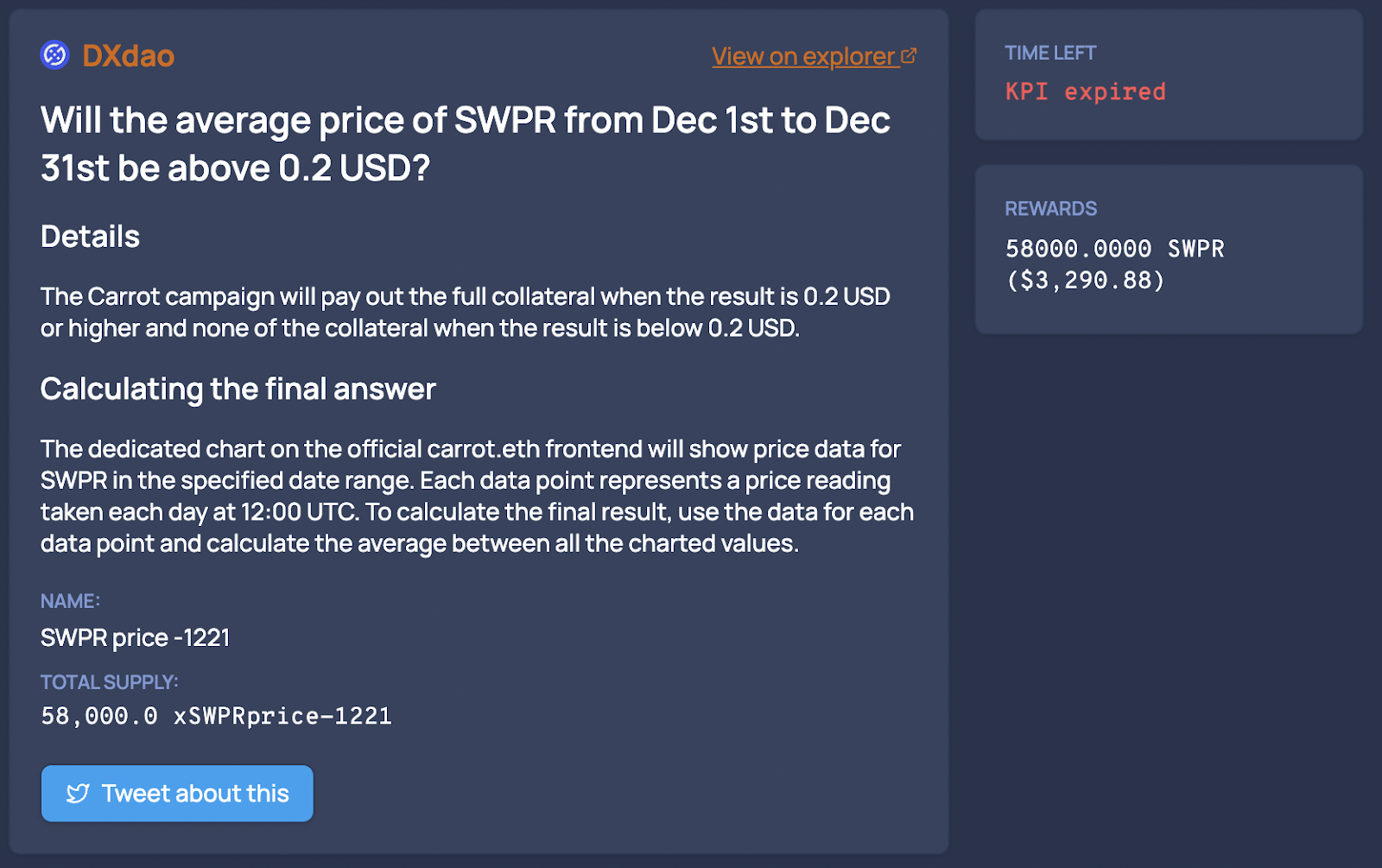 The goal of this campaign was to include the Carrot incentive tokens into the ongoing Swapr liquidity mining campaign as a part of the farming reward, while adding an incentive to support a declining SWPR price.

It seeked to incentivize Swapr liquidity mining farmers to support/increase the price of SWPR while earning the rewards, rather than selling the SWPR token.

If farmers of SWPR tokens supported/increased SWPR price, they would earn larger rewards. The data shows that 70 wallet addresses earned these Carrot tokens. The binary condition was not met so no collateral was paid out. As of the writing of this post, 1 wallet did decide to burn the earned Carrot tokens for fun.

It’s important to note that this Carrot campaign was an isolated experiment happening only on xDai/Gnosis Chain, while much of the SWPR is also on Arbitrum.

Was this reward large enough to incentivize SWPR farmers to not sell SWPR token?

SWPR price was already in a downward trend, likely from farmers selling SWPR rewards as they farmed them.

Was the campaign less effective because it was isolated to xDai/Gnosis Chain and not all chains SWPR is on?

The second Carrot campaign was:

Here, Swapr xDai “xDXDWETHTVL-1221” Carrot tokens pay out in an increasing linear fashion in the TVL range of 800K USD to 1.5M USD, with no payout below 800K USD. You can find the campaign on Carrot here. 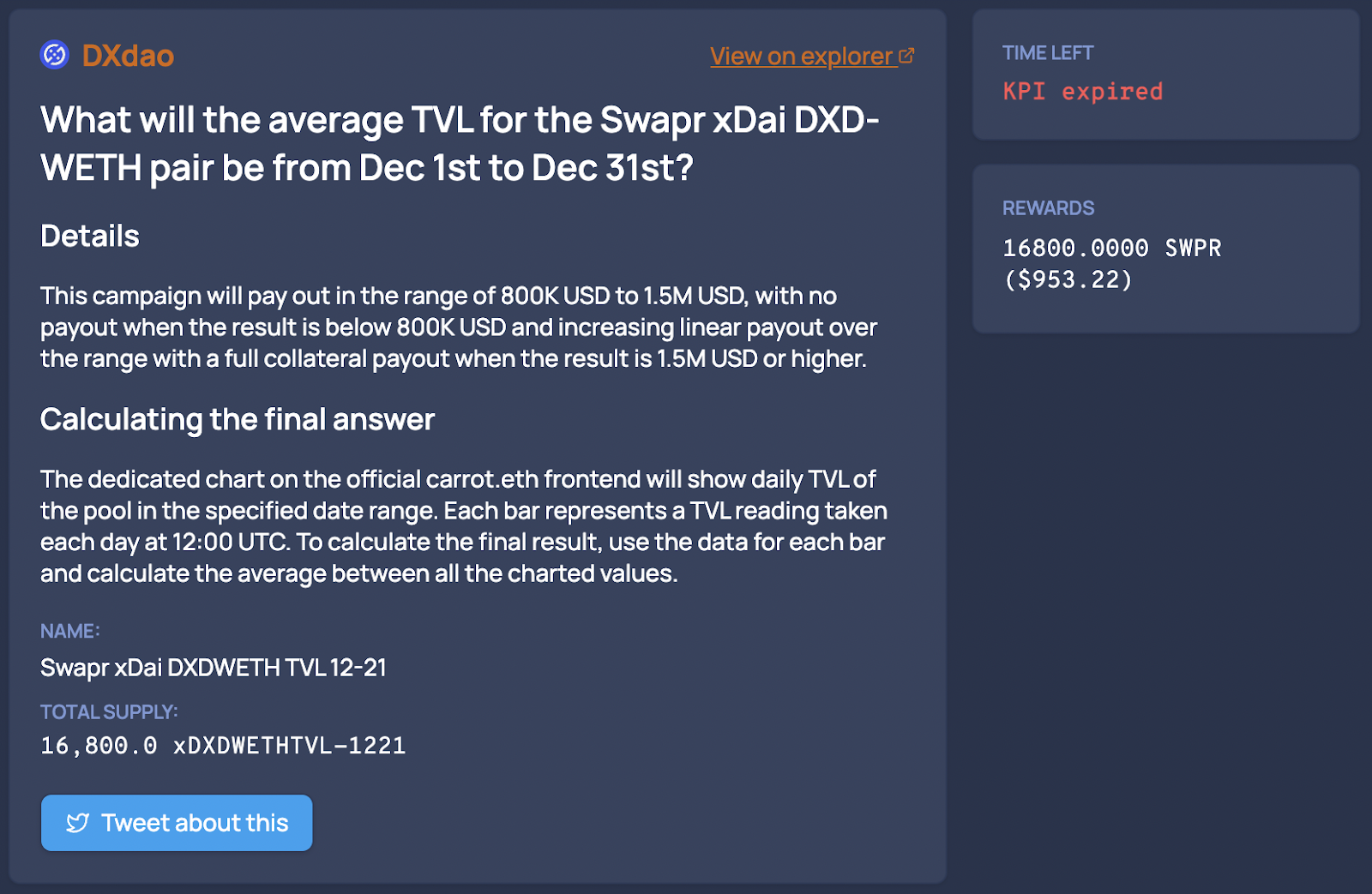 The goal of this campaign was to include the Carrot incentive tokens into the ongoing Swapr liquidity mining campaign as a part of the farming reward, while adding an incentive to increase Swapr TVL of a specific pair.

It seeked to incentivize Swapr liquidity mining farmers to add additional liquidity to the DXD/WETH pair on Swapr xDai, while earning the rewards.

This Campaign ended up paying out about 31% of the total available payout. The final TVL ended up within the payout range of 800K to 1.5M USD. The final average TVL ended up being about 1.02 million over the course of December.

Due to the 7-day delay for bridging from Arbitrum, and the transaction costs associated with having to go through mainnet, this becomes an obstacle to attracting more liquidity to a pair on xDai/Gnosis Chain. This could be a reason for the limited success for the TVL campaign.

Why didn’t this pair attract higher liquidity in order for farmers to receive the maximum payout?

Is the incentive large enough to drive behavior?

The maximum Carrot rewards on this campaign was 16,800 SWPR, currently equal to $953. This is TINY money. Split between participants this is VERY TINY money.

What did we learn?

We learned that the exact structure of the campaign, the size of the incentive and how much of the opportunity it covers all matter a lot.

It becomes hard to isolate exactly what effect each variable has on the campaign performance.

We think Carrot campaigns with ranges are more favorable to users. Some payout is more interesting than zero payout.

Let’s come up with some additional Carrot Campaigns to keep experimenting. We can refine and/or expand the campaigns we tried. We can also try some new use cases for DXdao.

Let’s try campaigns on our most important pairs on Swapr.

We could also try incentivizing a behavior on chains (Arbitrum and Mainnet) using Carrot tokens on Gnosis Chain.

Another idea is to friendly airdrop a Carrot token “gift” to all wallets that interacted with Carrot and Carrot tokens. This could be with an interesting longer-term condition about SWPR price.

Thanks for putting this together, Sky. For those that missed, there was a good conversation regarding this post and the first Carrot campaigns on today’s Biz Dev call.

In addition to thinking about what the campaigns are trying to incentivize, we can also brainstorm the distribution of the Carrot tokens. Distributing to LPs via farming is one way, but projects could also airdrop Carrot tokens to targeted addresses. This raises the question of who to target (and how to tell them) but distribution might be as important as product design.