Hear ye’ hear ye’. I once again had the opportunity to spread the good word of DXdao throughout the crypto lands. This time, as the title has spoiled, throughout Paris for the ETHCC blockchain week. Although shorter than our previous events and made especially challenging by an intense heat wave (we had no AC

), we persevered; bringing home with us a multitude of important take-aways. This thread is more informative than my ETHdenver thread. I would recommend taking a read through the still very relevant findings here, or directing your attention to @skymine’s master thread with a variety of findings.

The first striking thing when participating in the various events is that the attendees felt far more aligned from a building perspective. The events were more akin to Lisbon to me; likeminded, building oriented individuals looking to discuss and deliberate important topics in the space. This is in contrast to Denver, while important in its own right, mostly focused on selling to customers and users. B2B vs B2C, really.

This will not necessarily be news to those of you who read my previous thread, but the most popular and deepest discussions about DXdao are ALWAYS our governance. How our governance is unique. How DXdao was ahead of the curve with non-transferable voting power. How EVERYONE I spoke to wanted a piece of the pie, and was incredibly interested in utilizing our model for their own governance.

As for the environment; despite being super busy and packed into a short window, it accommodated ample opportunities for furthering relationships with partners and springing more to life. For example…

The highlight of the week to me was the event hosted by DXdao, Gnosis, and GitPoap. Although less exciting than a rave, the rooftop event provided a perfect (and comfortable) avenue for fostering and exploring further relationships with our most trusted partners. 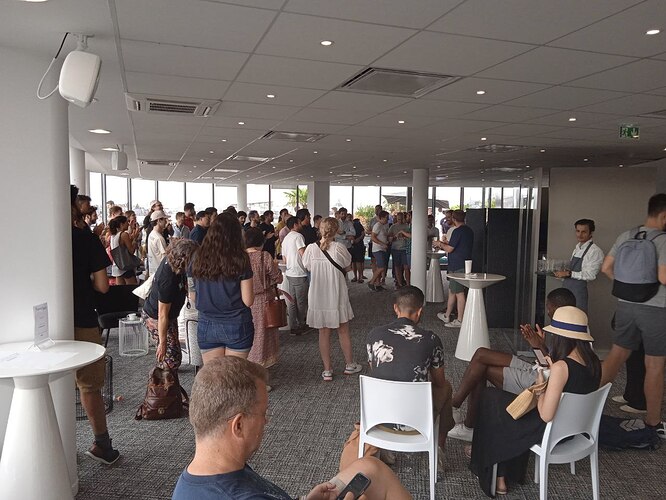 Overall, I was happy with our DXdao co-organized event with Gnosis Chain, GitPOAP and Gnosis SAFE. By design, a late afternoon happy hour, in a great, comfortable space nearby ETHCC, with cold drinks and no loud DJs seemed like the perfect place to invite our friends and partners for a few hours of top-notch discussions and friendly laughs. I think it went well.

I am wondering if we can try to achieve this same environment more often at each of the main events DXdao attends.

In my opinion, I think it is by far the most effective and cost-efficient way to increase the value created and awareness spread for DXdao and friends at an event.

… and I’m not referring to how I stuffed my backpack full of swag like in Lisbon. DXdao, through the help of an ever growing DXvoice squad, presented its most unique and impressive swag offering to date despite not having a booth. It also sported a new swag strategy, which included still obvious yet more subtle DXdao branding. This proved incredibly effective, with our limited items being incredibly desirable and more common items seen EVERYWHERE. These are including but not limited to:

Fans — A thousand times over this stole the hearts of the crowd. Despite dozens of other projects bringing their own branded fans, none of the others were close to our quality level or as widely used. The fans could be spotted everywhere throughout the week and all around the various parties. 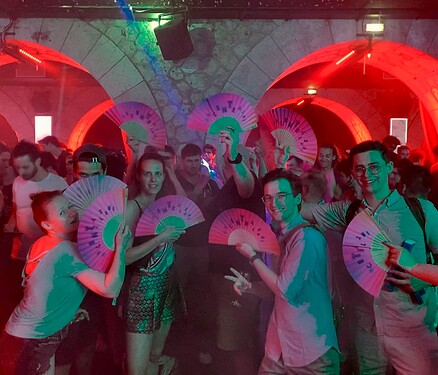 Shirts — A new path… Knocking it absolutely out of the park, our DXdao designed shirt was aesthetically beautiful and profound. So beautiful in fact, that contributor @MilanV has claimed the title of the first DXdao branded tattoo. (To the best of my knowledge). There were also some DXdao hats flying around! 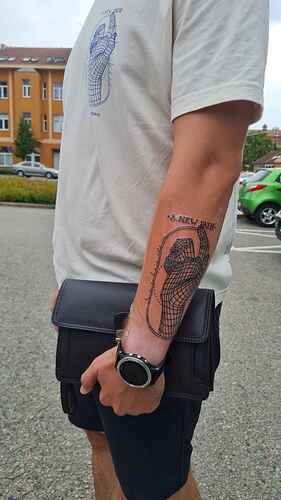 Swapr — Swapr definitely deserves its own segment. The Swapr squad came out in force, all identifiable by special Swapr shirts. At the various events Swapr marketing posters and gorgeous stickers were flying off their respective stacks. 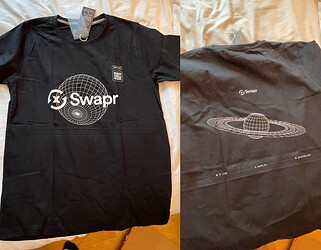 Stickers — At this point I likely sound like a broken record. We brought a variety of fantastic stickers; all I can say is that it’s not the usual fodder that gets thrown right in the bin. High quality material, prismatic colors, and even one that glows in the dark! 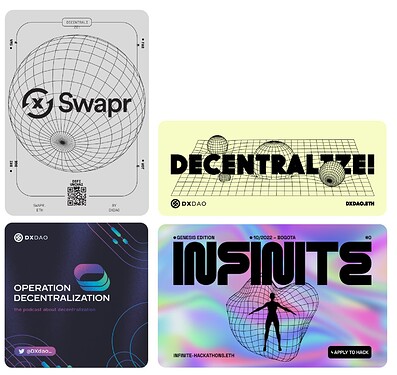 Slice 3 (1)1513×1425 180 KB
Renderings of the various stickers. Not pictured: Holographic, reflective and glow in the dark features!

To cap off swag, I wanted to give a massive thank you and give credit for fantastic work to the DXvoice squad… and specifically the highlight of the show @international.blue who’s unique design approach and speedy executions helped us stand apart from the crowd. I’m elated to have you on the team.

I’m among the few that never went to a Raave between a lack of tickets or catching a flight. Unfortunately, I once again have gone without the experience! We attempted to get into Raave not long after opening with tickets in hand, and had a terrible experience.

The 2-3 bouncers that were hired did not speak any English. Despite being a multicultural and global event, this wouldn’t have been an issue provided they had ANY people management skills. A single 8 foot metal fence placed halfway from the sidewalk to the street was all that was used resulting in more of a mosh pit than a line. There were many good people attempting to form a line and wait fairly, while dozens of others physically shoved or jumped fence through the smoking pit. I tried to tell several off or block off the path once I could reach the pole; I was called “line police”, “fucking faggot”, and nearly got into a fight telling people to start at the back of the line. Others justified it as being “more important than [me]”, or “[their] friend was inside and letting [them] in]”. 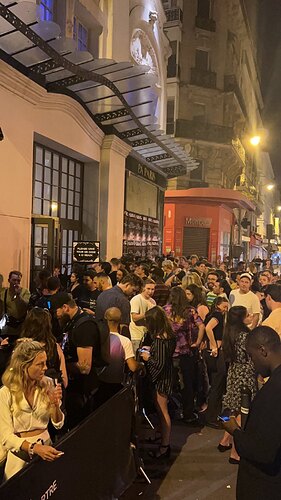 After about an hour of chaos, the bouncers actually tried to do something — closing off the smoke pit and attempting to enforce the line that the crowd had made but the damage was done. Unfortunately, while trying to help, myself and a few other good people were physically removed from the line. The bouncers also said “You are in France, learn French” (In French, of course) broadly to the group they were evicting.

My reflection and take-away here? This event represented the ugly, immature side of the and Ethereum space. I’m sure the party was great, but a mismanaged entry highlighted the level of disgusting, clout chasing, “more important than thou” individuals we secretly (or not so secretly?) share this space with. (I’m sure this is obvious to most of us, but it was very demoralizing to experience it in person). I’m incredibly grateful that DXdao seems to prefer fun, productive and collaborative environments — or perhaps focusing on building! As @sky said:

Every night, there was a DJ party that lasted until at least 4am. This isn’t sustainable.

We could definitely do a rave better anyhow. I was a DJ for 3 years after all. 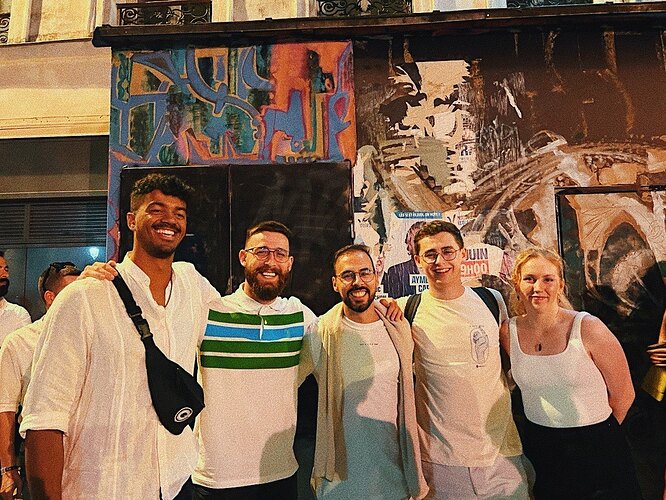 Last but not least, the DXvoice dinner! The squad had the unique opportunity to get together on an intimate basis to chat strategy and relax with some fantastic pizza. On the (loose) agenda? Infinite, some management, and the future of DXvoice. Lots was said surrounding Infinite, its goals and the idea of risk mitigation. Similarly, there was a resurfacing of previous ideas surrounding DXvoice value propositions and potential revenue streams.

Some heartfelt moments were had, including reflecting on the squad’s evolution from humble beginnings to the much healthier and successful place it is in today. To reiterate those thoughts, I’d like to again thank @whatt4 and @international.blue. These contributors came into DXvoice recently and have had as insanely positive of an impact as their passion. They bring everything to the table each day; I am eternally grateful to them for their commitment and the great work we have done thus far – finally meeting in person was a treat.

The ETHCC blockchain week was yet another fantastic opportunity to connect with cryptopians and share knowledge throughout the space. It also represented our most successful marketing efforts to-date, through desirable swag and important connections. Finally, and perhaps the most important of all, DXdao once again got the rare opportunity to sync up and collaborate with one another. Meeting new faces and conversing with familiar ones is not only special but very productive.

If you haven’t already, please read my thoughts from ETHdenver. I had decided to take a slightly more lighthearted/informative position with this thread; the Denver thread shares similar findings and is in more of a presentation format

Hey Kenan, thanks for this detailed review and description of the whole event and experience, very well written.
Yes, the decision came spontaneously to get a tattoo, I have been part of DXdao for almost half a year and the experience has been more than good, I am satisfied with my involvement and happy that I can contribute to the community in different ways. I have learned a lot since joining DXdao thanks to colleagues who are willing to pass on knowledge. This event made everything even more real because I met you all in person and now I am even happier. It’s amazing the happiness and energy I feel because I’m part of the community and I’m glad to contribute along with others, this tattoo was a way to celebrate all the beautiful things that have happened since I’ve been a part of DXdao.
Thank you all.

Special thanks to @international.blue for the wonderful design, which also influenced my decision to get a tattoo.

Swag was gone in 60 seconds.

Flying hot off the racks. 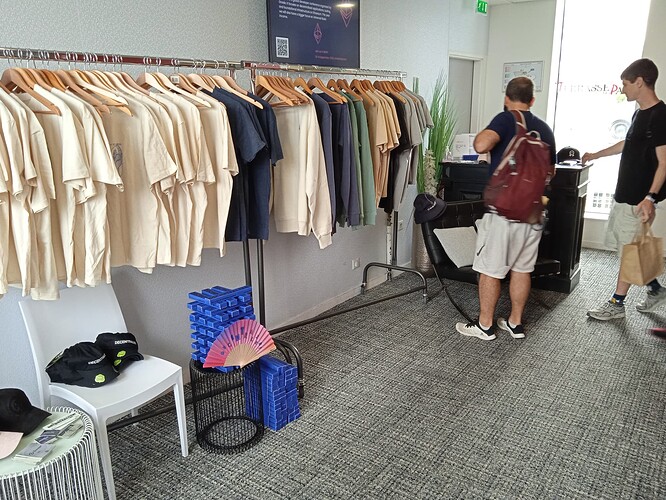 swag1920×1440 441 KB
The event DXdao co-organized with our partners had undisputedly the best venue. It was central /close to the conference/, cool, spacious, with a sweet panoramic view of the city and guests enjoyed their time, which allowed for great conversations to be had. The cost was very reasonable and the fact that it is shared between the four co-organizing orgs makes it negligible. venue.mp4 - VEED

As far as rAAVE is concerned, despite the long wait time and queues, DXdao helped attendees endure the heat, delivering 200+ fans of decentralization. https://twitter.com/omw_to_the_moon/status/1553871911855312896

The highlight of the week to me was the event hosted by DXdao, Gnosis, and GitPoap.

Undoubtably my favorite too. This style of event fits DXdao like a glove. Congrats to @sky and @Arhat for putting this together. Fantastic job guys! Far exceeded my expectations.

@whatt4 and @international.blue. These contributors came into DXvoice recently and have had as insanely positive of an impact as their passion. They bring everything to the table each day; I am eternally grateful to them for their commitment and the great work we have done thus far – finally meeting in person was a treat.

Thank you Keenan, working with you is cool and meeting in person was certainly a highlight. Onwards to Bogota!

FYI, for those that do not know, all the beige shirts are DXdao shirts.